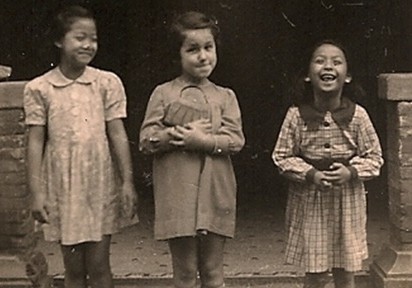 A Jewish girl and her Chinese friends in the Shanghai Ghetto during World War II, from the collection of the Shanghai Jewish Refugees Museum. (Wikimedia Commons)
Advertisement

(JTA) — The World Jewish Congress and China’s government are preparing a joint commemoration of the 70th anniversary of the liberation of the Shanghai Ghetto.

The People’s Republic of China and WJC intend to host the ceremony in September, the parties said in a joint statement to media on Wednesday.

More than 23,000 Jewish refugees lived in the ghetto in Shanghai, which was then occupied by Japan — an ally of Nazi Germany and cofounder of the fascist Axis powers.

Some of the refugees in the ghetto arrived there from Lithuania, where the Japanese diplomat Chiune Sugihara gave transit visas into Japan to approximately 6,000 Jews in defiance of orders from Tokyo.

“We will commemorate, for the first time, part of the Holocaust that tends to get less attention,” said WJC President Ronald S. Lauder, who will chair the commemoration event.  “This historic event also marks another step towards strengthening the bonds between the Chinese and Jewish people.”

The event, the first to be co-organized by the WJC and China, will bring 100 WJC representatives to Shanghai.

Robert Singer, CEO of Lauder’s organization, finalized the joint commemoration earlier this week during a meeting in London with Qiu Yuanpin, a Chinese minister of the Overseas Chinese Affairs Office.

“It is in the best interests of world Jewry that we forge even closer relations with Beijing,” Singer said.

Yuanpin said in the joint statement with the WJC:  “Both Chinese and Jewish nations have suffered at the hands of Fascist forces, but, ultimately, achieved final victory after unyielding struggle.”

Chinese officials in recent years have stepped up their rhetoric against Japan, demanding more explicit expressions of regret for atrocities committed during World War II from the current government of the island nation.

Historical tensions between the Asian powers are further complicated by efforts by Japan’s right-wing government to beef up the country’s military capabilities, ending decades of a pacifist prohibition on maintaining offensive capabilities.