AIPAC wants to talk Iran, but it can’t get away from speechgate 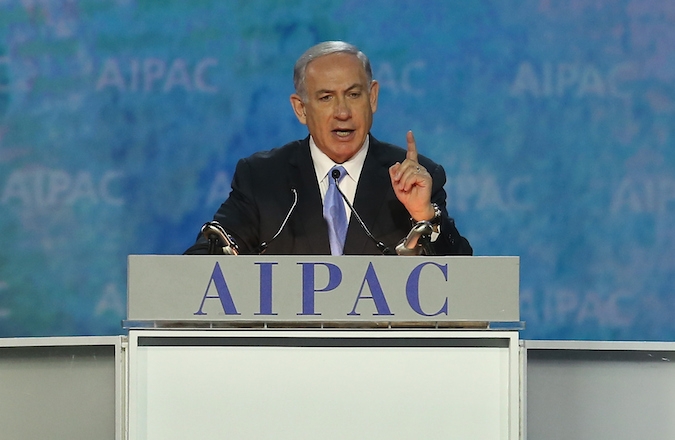 WASHINGTON (JTA) – For all its focus on Iran, AIPAC can’t seem to get away from the controversy surrounding Israeli Prime Minister Benjamin Netanyahu’s impending speech to Congress.

Speaking to attendees Sunday at the launch of the largest-ever annual conference of the American Israel Public Affairs Committee, CEO Howard Kohr acknowledged the elephant in the room head on.

“There’s no question that the way this speech has come about has created a great deal of upset among Democrats,” Kohr said.

“It frankly may have upset people in this room,” he said. “All of us should be concerned [who] care about the bipartisan nature of the relationship.”

The notion that anyone attending an event for America’s premiere pro-Israel lobby might be unhappy with the sitting Israeli prime minister has not haunted the organization since the early 1990s, when it suffered the opprobrium of the late Yitzhak Rabin, who thought AIPAC overly aggressive in its tactics.

Netanyahu arranged his speech with Republican leaders in Congress while agreeing to keep it a secret from the White House, congressional Democrats and the pro-Israel community, including AIPAC, until just before it was announced.

Netanyahu’s defenders have said his maneuvering and the decision to go ahead with the speech are necessary because Netanyahu needs the widest possible audience for his message – that the Iran nuclear talks underway are headed for catastrophic results that could leave Iran a nuclear weapons threshold state.

In his own speech to AIPAC on Monday morning, Netanyahu expressed few regrets for going ahead as planned with his controversial speech to Congress.

“I deeply appreciate all that President Obama has done for Israel: security cooperation, intelligence sharing, support at the United Nations,” Netanyahu said in remarks that drew multiple standing ovations. “I am deeply grateful for this support and so should you be.”

However, he said his differences with the Obama administration over the course of Iran nuclear talks were too important not to take up the offer to speak to Congress.

“I have a moral obligation to speak up in the face of these dangers while there’s still time to avert them,” he said.

Netanyahu said he regretted that the speech had been “misperceived” as partisan and said bipartisan support for Israel was critical.

“Israel should always remain a bipartisan issue,” he said.

AIPAC had wanted to use the conference and its massive lobbying finale to shore up support for the Iran bills among Democrats.

Yet Netanyahu’s speech kept getting in the way. Nearly half of American voters believe that Republican lawmakers should not have invited Israel’s prime minister to speak to Congress without first notifying Obama, a Wall Street Journal/NBC poll found. Some 48 percent of voters polled said that the president should have been consulted and 30 percent said they believed the invitation proffered by House Speaker John Boehner (R-Ohio) was appropriate.

Kohr himself did not criticize Netanyahu, and emphasized that AIPAC is encouraging lawmakers to attend the speech on Tuesday, but his acknowledgment of the legitimacy of being upset about the address cast a shadow over a conference that is focused on increasing congressional influence on the Iran talks.

AIPAC’s legislative agenda, which in past years has featured an Iran component along with components on the Middle East peace and the U.S.-Israel alliance, this year focuses only on Iran.

“While we will continue to lobby on many important issues to strengthen the U.S.-Israel relationship, on Tuesday we will encourage Congress to take immediate action on just one: stopping Iran,” Brad Gordon, AIPAC’s legislative director, told the conference.

On Tuesday, the last day of the conference, many of the 16,000 activists attending the conference will visit Capitol Hill to promote two bills and a letter related to the Iran nuclear talks.

The activists will seek cosponsors for a Senate bill that would add sanctions should Iran walk away from the talks. But they will not press for a vote, deferring to Democrats who back the bill but want to wait out a March 24 deadline for an Iran nuclear deal.

The activists also will seek support for a new Senate bill that would subject any agreement with Iran to congressional approval. Both bills have bipartisan support, although Obama has said he will veto both of them.

Finally, they will ask members of the U.S. House of Representatives to sign a letter initiated by Reps. Ed Royce (R-Calif.), the chairman of the Foreign Affairs Committee, and Eliot Engel (D-N.Y.), its ranking Democrat, urging the president to subject any Iran deal to congressional evaluation.

AIPAC leaders also marked a subtle difference between their approach and that of Netanyahu, who has suggested that the talks are inherently flawed. AIPAC instead wants to increase congressional oversight of the process.

“The ability to look at this to submit it for approval or disapproval is a critical role for Congress to play,” Kohr said. Attempts to depict endorsement of the talks as all or nothing — a peaceful resolution or war — were an attempt to silence those who wanted to help shape the direction of the talks, he added.

Kohr did not name the parties who accused critics of the talks as leading the United States to war, but administration officials have cast the talks in such either-or terms.

“It’s meant to silence critics, and we will not be silent,” he said.

Democratic lawmakers, as Kohr noted, have expressed their discomfiture with how Netanyahu’s speech was organized, and on Sunday for the first time that unease seemed to extend to a Republican lawmaker.

Asked his view on the speech, Sen. Lindsey Graham (R-S.C.), a sponsor of the bill that would require congressional review of an Iran deal, referred to Netanyahu as a “politician” and said he preferred hearing from AIPAC activists.

“I will listen to him and then I’ll decide what’s good for America,” Graham pointedly said, emphasizing Netanyahu’s status as a foreign leader, during a panel discussion on Monday morning with Sen. Ben Cardin (D-Md.).

“To my AIPAC friends, you’re going to make more difference than any speech that any politician can make,” Graham said. And if that weren’t clear enough, the South Carolina senator said that given the choice between Netanyahu and the AIPAC conferees coming to Washington – although no one had asked him to make such a choice – he preferred AIPAC.

“I would pick the AIPAC members to be in Washington,” he said.

The activists appeared to understand the distinction that Graham was making between Netanyahu and AIPAC. For an audience that usually roars its approval at flattery, it delivered tepid applause.

Indeed, the rank and file seemed enthused about Netanyahu’s speech – the mere mention of it during the first session, by a moderator, evinced roaring applause.

Also scheduled to speak Monday are Susan Rice, the national security adviser, who last week said Netanyahu’s speech was “destructive of the fabric” of the U.S.-Israel relationship, and Samantha Power, the U.S. ambassador to the United Nations.