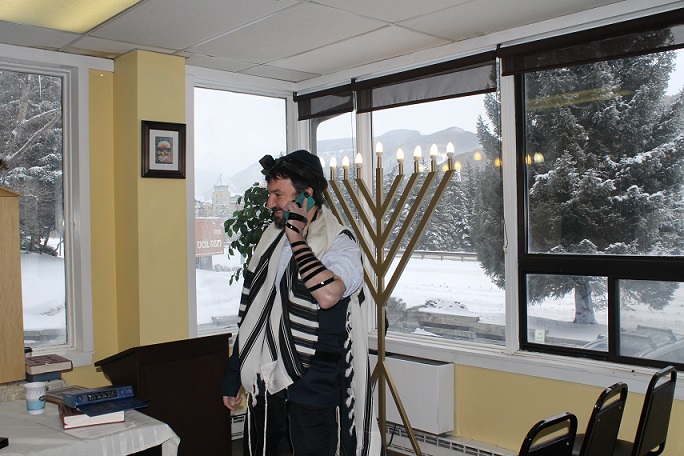 Dovid Mintz, the Chabad rabbi in Vail, Colo., works the phone trying to corral a minyan on a powdery morning at one of North America's most popular ski towns. (Uriel Heilman)
Advertisement

VAIL, Colo. (JTA) — When Dovid Mintz was growing up around the corner from the Lubavitcher rebbe in Brooklyn, he never imagined he’d find inspiration for Jewish outreach work on a black-diamond ski slope.

But after one of his nine siblings took up the post of Chabad emissary in Aspen, Colo., Mintz began making the trek to the Rockies to help out on holidays. He soon found himself drawn to the mountains of western Colorado – not, like so many others, for the skiing, but for the potential for Jewish outreach.

Located midway between Denver and Aspen, and home to the second-largest ski resort in the United States, Vail was chock-full of vacationers, retirees and ski bums — many of them Jews ripe for outreach. At the time, the only synagogue in town, B’nai Vail, did not hold regular Shabbat services.

Nearly a decade since he moved to Vail in 2006 (following another older brother who opened a Chabad center in a Denver suburb in 2004), Mintz says skiing gives him the emotional fuel for his Jewish outreach work. He’s on the snow about once a week, often with his kids and sometimes with his wife, Doba, who wears a skirt over her ski pants.

“Skiing with your family is one of the most powerful experiences in all of life,” Mintz, 33, told JTA. “You’re in your own domain, nothing can get in your way. You’re with your kids on the top of the world. Wow. We did it. What are we doing next? What are we going to fulfill?”

Many of the challenges Mintz faces are familiar to Chabad emissaries, or shluchim, the world over. He’s both rabbi and fundraiser, program director and spiritual leader, sexton and caterer. It’s tough getting a minyan — the quorum of 10 men required for Orthodox prayer. He struggles to instill in his kids a strong Hasidic Orthodox identity while balancing their need for a healthy social outlet in a place with practically no other religiously observant Jews.

But Mintz has come up with some unique responses to these challenges.

A techie working with Mintz created an automated “minyan maker” program that allows visitors to sign up for potential weekday services on Chabad of Vail’s website and receive automatic notification if 10 men or more commit to coming. Mintz has shared the technology with a handful of other Chabad centers. Morning minyans are held at Chabad’s rented space at Vail Run Resort. Afternoon minyans usually meet near a Starbucks shop, and worshippers come in their ski boots.

Vail doesn’t have a kosher restaurant, so Mintz employs a full-time chef to cook meals visitors can order for delivery to their hotel or condo. The service, which provides double-wrapped entrees so consumers can warm up their food without fear of non-kosher contamination, generates a modest profit.

And then there’s the skiing. The eldest of Mintz’s three kids, 6-year-old Isaac, spends several hours a day studying in an online school for the children of Chabad emissaries. But he gets in-person socialization by ice skating and at ski school, where he takes lessons twice a week. Hanging out with non-Jewish peers has also taught the boy a valuable skill, Mintz says: The ability to stick to his Jewish commitments even when tested with, say, the offer of non-kosher pizza at a friend’s birthday party.

“It doesn’t even bother him that he can’t have the pizza,” Mintz said. “That discipline you give them, they become masters of themselves. He’s capable of overcoming this.”

Plus, Mintz noted, the other kids’ families by now are familiar with his dietary restrictions and are respectful of them; they always make sure to have kosher snacks on hand.

On Shabbat, when up to 25 people may show up for meals, the Mintz children welcome guests, handing out yarmulkes and setting up the Kiddush table. On Passover, up to 200 people attend Chabad’s seders. Mintz says he has outgrown his current space and has begun fundraising in earnest for $4.5 million to buy a permanent property in Lionshead, one of Vail’s base villages. 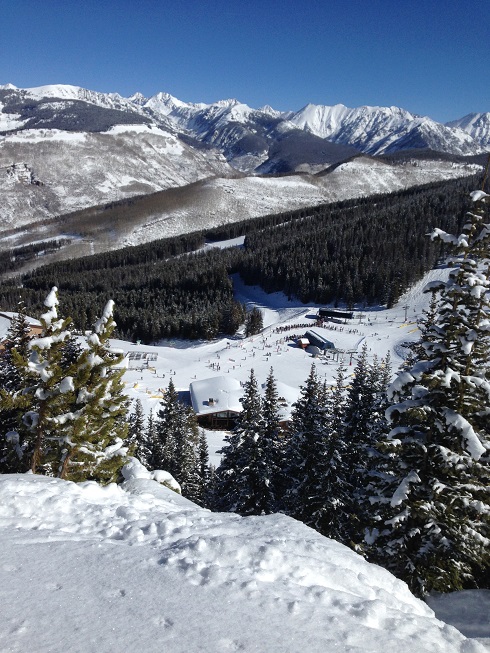 With some 5,300 acres of terrain, Vail is the third-largest ski resort in North America. (Uriel Heilman)

Vail isn’t just any ski town. It’s home to the third-largest ski area in North America, with nearly 5,300 acres of terrain. That’s about eight times larger than nearby Aspen Mountain, 11 times larger than Stowe in Vermont, and more than 20 times as big as New York’s Hunter Mountain. World-famous skiers Lindsey Vonn, Sarah Schleper and Mikaela Shiffrin are from Vail.

Chabad is not the only Jewish option here. B’nai Vail, an independent synagogue with about 230 members that’s been around since 1977, started holding regular Friday night services for the first time last summer after hiring an ex-Navy chaplain as its full-time rabbi. The services, which draw about 25 people, are held at the Vail Interfaith Chapel. There’s also a Hebrew school with about 50 kids that meets every Sunday — except for weeks when the kids have ski races.

“The people here didn’t move to Vail for a Jewish life. They moved to Vail for the outdoors,” B’nai Vail’s rabbi, Joel Newman, said. “But now that they’re here, they say: What is there Jewish that we can participate in?”

Newman, who is affiliated with the Conservative movement, says he doesn’t compete with Chabad. B’nai Vail has no Shabbat morning service, and he says his congregants typically don’t want the Hebrew-only service with gender-segregated seating that Chabad offers.

Some of the Jews who end up at the Chabad seek it out, but many discover it by accident when they spot Mintz on the mountain. Though he hardly stands out in his ski gear, the tzitzit ritual fringes that hang over Mintz’s snow pants are a dead giveaway.

Mintz says that being a shaliach in Vail is like a dream come true.

“We’re pumped to be here. We have that excitement, energy and motivation that we want to be here, fulfilling the rebbe’s shlichus,” or mission, he said. “This is who we are, this is what we embody. And then you get the skiing, and that’s a bonus.”