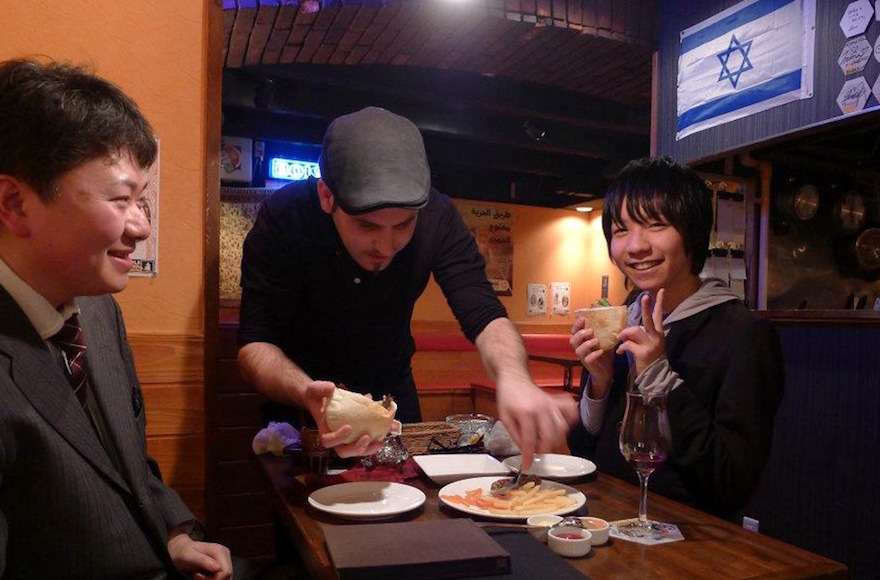 Roy Somech serving patrons at a restaurant he owns in Sendai, Japan, in 2012. (Courtesy of Roy Somech)
Advertisement

TOKYO (JTA) — At the end of his 13-hour workday, Hidehiko Egata takes a seat at the bar at his regular eatery in this city’s upscale Shibuya neighborhood.

A senior adviser at a local financial firm, Egata sips sake and nibbles on traditional Japanese pickles as he chats with the owner in Japanese. Then he orders his usual dish: hummus topped with warm chickpeas, tahini and olive oil.

“I first ate hummus a few years ago on the other side of town,” said Egata, a slender man in his 50s who keeps fit by practicing Japanese martial arts daily. “I found that it was more healthy than my usual dinners then. It was filling, but it didn’t make me tired the way a noodle dish would. When this place opened, it became my regular spot.”

This place is Ta-im, an intimate 16-seater that is one of no fewer than eight Israeli restaurants to open in Japan in the past five years, serving up hummus and other Middle Eastern staples to the novelty-oriented and health-obsessed urban elite. In January, the Chabad House in Tokyo joined the trend when it opened Chana’s Place — the capital’s only kosher certified restaurant — serving hummus, shakshuka, matbucha and other popular Israeli dishes.

“The urban population in Japan only recently became exposed to real international cuisine beyond the obvious dishes like spaghetti, pizza and hamburgers,” said the Israeli businessman Dan Zuckerman, 54, who moved to Tokyo in 1985 and ran a deli before he opened Ta-im in 2011. “Now they are discovering the more exotic foods like Mexican, Portuguese, Spanish and Greek.” 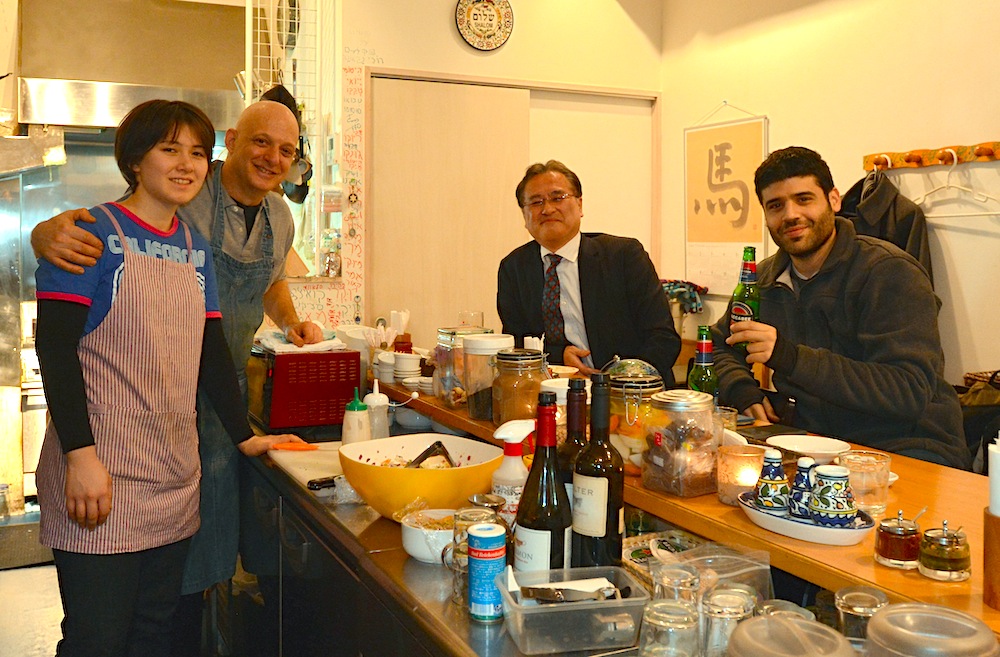 As new foreign restaurants open in Japan — Taco Bell announced its entry to the island nation in January — Israeli and Arab food enjoys an advantage because of its reliance on fresh vegetables and other lean substances, according to Rabbi Binyomin Edery, a Tokyo-based Chabad rabbi who supervises King Falafel, the city’s only certified kosher food stand.

“In a city where the population is so health conscious that about a third of them regularly wear surgeon masks whenever they go out, a lean, fiber-rich food that’s full of vitamins is going to have a serious advantage compared to fat-dripping tacos,” Edery said. “Israeli food is becoming super trendy in this country, and hummus is leading the charge because people here are already used to the idea of bean paste from their local food. It just fits.”

Chana’s Place, housed in the Tokyo Chabad center and run by the movement’s envoy to Japan, Rabbi Mendy Sudakevich, is small, accommodating only 14 diners at a time. The restaurant’s profits are used to fund activities for Tokyo’s Jewish community of a few hundred people.

“If this restaurant is to succeed, it needs to appeal to the Japanese public,” Sudakevich told JTA. “The Jewish, kosher-observing community is too small to sustain this business.”

Unlike Zuckerman’s Ta-im, which feels like a typical Tel Aviv hummus bar, complete with the Israeli pop radio station Galgalatz playing in the background, Chana’s Place fuses Middle Eastern cuisine with a local Japanese design, including a miniature Japanese garden.

Sudakevich says he realized he would need to adapt hummus for the Japanese after he served the dish at an event he catered for an Israeli firm in Tokyo. Hummus is consumed typically by wiping the paste from a plate with pita bread, but the Japanese cut the bread into pieces and made tiny hummus sandwiches.

“The Japanese marry an almost impossible mix of hunger for new stuff with a deep conservatism,” Sudakevich said. “If you want to serve them something new, you need to make sure you do it in familiar ways.”

Roy Somech, a 33-year-old Israeli who last year opened his second restaurant in Sendai, 220 miles north of Tokyo, takes a different approach. Somech believes in totally immersing his patrons not only in the Israeli experience, but that of the entire Middle East.

“When you come to our restaurants you find three flags: Israel, Turkey and Tunisia,” Somech said. “There’s Arab and Israeli music, there’s hookahs — all the fun stuff of the Middle East and Israel that many Japanese don’t know because they only hear of terrorism and bombs from that part of the world.”

Somech says he receives approximately 200 patrons daily at his two restaurants in Sendai and that 70 percent of them are returning customers.

The Israeli restaurants are able to supply their patrons with fresh pita thanks to the only bakery in the country that produces the flatbread, an operation set up a decade ago by the Israeli entrepreneur Amnon Agasy. But white tahini, the sesame spread that is a key ingredient of hummus, must be specially imported — a constraint that has 3 1/2 ounces of hummus selling in Japan for about $6.

But, he added, in a country where even cheap street food is expected to meet strict standards, and whose capital city has more Michelin stars than Paris, “competition is very, very tough.”