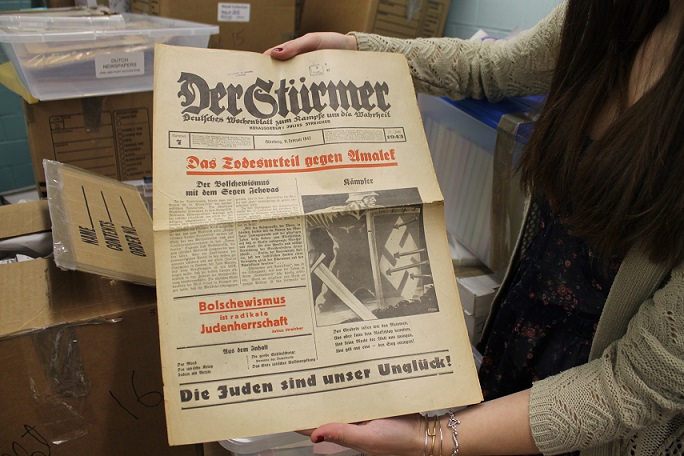 A copy of the Nazi weekly Der Sturmer from February 1943, with a headline at bottom left reading "Bolshevism is radical Jewish domination." The newspaper is part of the Mazal Holocaust Collection at the University of Colorado-Boulder. (Uriel Heilman)
Advertisement 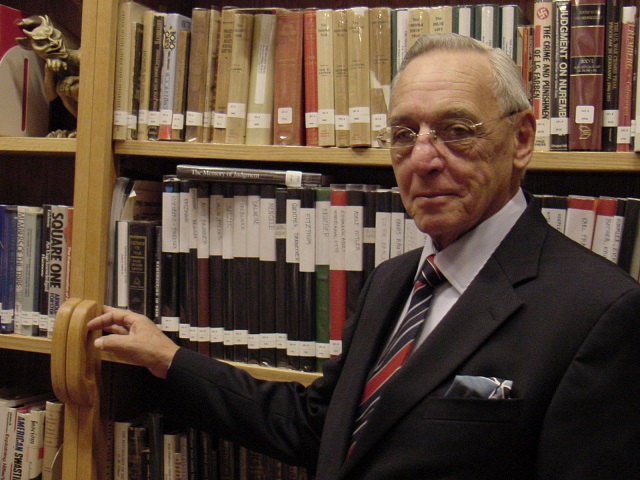 After discovering in his teens that he was Jewish, Harry Mazal, pictured here in his home Holocaust library in 2002, spent the latter years of his life obsessed with amassing a collection of material on the Holocaust. (courtesy Aimee Mazal Skillin)

BOULDER, Colo. (JTA) — The yellowing document is crumbling and fading, but the smooth signature on its cover is as legible as it is chilling: Rudolf Hess, the Nazi who served as a Hitler deputy from 1933 to 1941.

The signature, which adorns a 70-year-old leniency plea for top Nazi Hermann Goering during the postwar Nuremberg trials, is one of some 500,000 discrete items and 20,000 books donated last year to the University of Colorado at Boulder — nearly the entirety of one of the world’s largest privately owned Holocaust collections. The unusual trove includes aerial surveillance photos of the Auschwitz-Birkenau extermination camp, decaying copies of the Nazi newspaper Der Sturmer, Nuremberg trial transcripts, and a trove of pro-Nazi and Holocaust denial literature.

“We don’t even know what we have,” said David Shneer, director of the Jewish Studies program at University of Colorado at Boulder and the person responsible for bringing the archive to the university. “We have teams of students inventorying it. We hope to get through everything by the fall.”

The unlikely story of how the archive, known as the Mazal Holocaust Collection, ended up in Boulder is a tale of Holocaust denial, a hidden Jewish past and the shady market for Holocaust artifacts.

The collection represents the life’s work of Harry Mazal, a businessman from Mexico City who was raised Protestant and discovered during his teen years that he was Jewish. Mazal’s family emigrated from present-day Turkey before World War II, and his father built a successful women’s lingerie business that he subsequently passed on to his son.

Though neither Mazal nor his parents personally experienced the Holocaust, Mazal became increasingly disturbed by the rising tide of claims that the genocide against the Jews was fabricated. Determined to do something about it, Mazal, who made his first research trip to Germany in the 1960s and died in 2011 at age 74, began collecting and carefully documenting evidence of the concentration camps, the Final Solution and the murder of the 6 million Jews.

Mazal became fixated on documenting the Holocaust. He traveled to Europe to photograph the camps and bought rare Holocaust artifacts on eBay. He established a relationship with the U.S. Holocaust Memorial Museum in Washington and became a repository for trial transcripts that were duplicates of material the museum already had. He collected Yizkor memorial books, original sketches of extermination camps and aerial photographs of the camps taken by the U.S. military, American Nazi newspapers from the 1930s and ‘40s, materials relating to the David Irving-Deborah Lipstadt Holocaust denial trial in England, and an extensive array of Holocaust denial literature. He also wrote scholarly articles and lectured about the attempted genocide of the Jews.

“I remember him being very offended by the fact that Holocaust denial was so prevalent,” Mazal’s daughter, Aimee Mazal Skillin, told JTA. “He really took it to heart. He began to collect as much information as he could about the Holocaust and the war, and about how the Jews were mistreated. Combating Holocaust denial was his real motivation. It was like he was walking around with horse blinders and saw nothing else other than this mission.”

A copy of the Nazi weekly Der Sturmer from February 1943, with a headline at bottom left reading “Bolshevism is radical Jewish domination.” The newspaper is part of the Mazal Holocaust Collection at the University of Colorado-Boulder. (Uriel Heilman)

By the mid-1990s, there was no more room for Mazal’s collection in his home in San Antonio, Texas, where he had moved with his family. So Mazal built an addition to his house, which proved inadequate even before it was completed. He later added two more expansions, bringing the total space dedicated to his in-home Holocaust library to 3,000 square feet. It became one of the largest privately held collections in the world, according to Lipstadt, the Holocaust historian who was sued by Holocaust denier David Irving in 2000. Mazal even kept some bone fragments collected at Auschwitz in a glass case on his desk (his daughter later buried them).

As Mazal’s collection grew, he enlisted help. That ultimately led to one of his most devastating discoveries: that someone working for him was stealing one-of-a-kind materials and illicitly selling them online. Mazal, who by the time of the discovery was ill with cancer, mounted a sting operation to find the perpetrator.

Ultimately, a young man named Mansal Denton who had volunteered at Mazal’s Holocaust library was arrested in January 2011 and charged with stealing some 17,000 pages of documents valued at $100,000 to $200,000. Last June, Denton was sentenced to eight years in prison. Some of the material Denton pilfered still has not been recovered.

The Denton theft underscored the need to find a proper home for the collection, especially after Mazal’s death in 2011, when it became clear his family wouldn’t keep the big house. Skillin considered selling the materials, whose value was estimated at $1 million to $1.5 million, but she didn’t want the collection to be broken up. 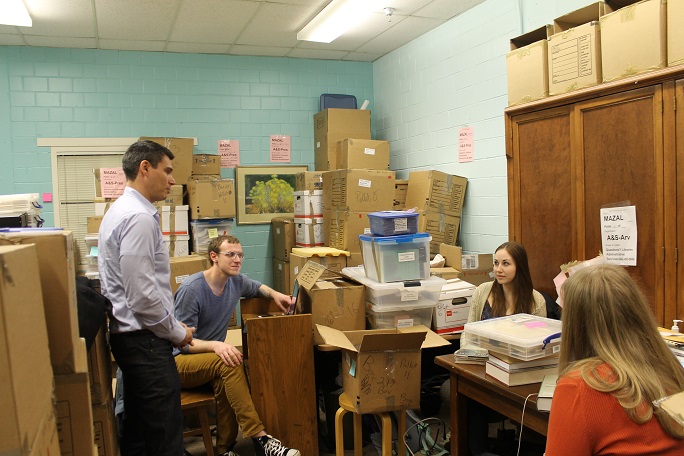 Professor David Shneer, left, talking with students at the University of Colorado-Boulder working on categorizing the materials in the Mazal Holocaust Collection, February 2015. (Uriel Heilman)

While planning to move her own family to Boulder, Skillin, who is an interpreter and social media consultant and is raising her children as Jews, was introduced to Shneer. In 2011, Shneer had helped bring the collection of Rabbi Zalman Schachter-Shalomi, the father of the Jewish Renewal movement who died last summer, to the University of Colorado.

Skillin and Shneer hit it off, but with Skillin’s imminent plans to sell her San Antonio home, Shneer had to act fast. When he flew to San Antonio to examine the collection, he only had 24 hours or so to figure out what to do with it, he recalls.

Eventually, a small portion of the collection went to Texas A&M University-San Antonio, including about 8,300 books. The rest was packed into 367 boxes and trucked to Boulder.

In the months since, Shneer has been overseeing a team of student interns and graduate students cataloging and digitizing the collection in a windowless office in the bowels of the university library.

Schneer says it has been challenging not just to figure out what’s in the trove, but how to deal with the copious collection of Holocaust-denial and pro-Nazi material, including literature produced by the American Nazi Party beginning in the 1930s.

“We have to think about how we deal with Holocaust denial literature,” Shneer said. “Libraries are afraid of the material. We can’t just put it on shelves without context. How do we deal with this?”

Once the Mazal collection is categorized and digitized, the university plans to make it accessible to researchers all over the world by putting it online. Some of the collection’s 20,000 books will end up on the library’s shelves. Rare and one-of-a-kind volumes will be preserved in the university’s 60,000-square foot archive.