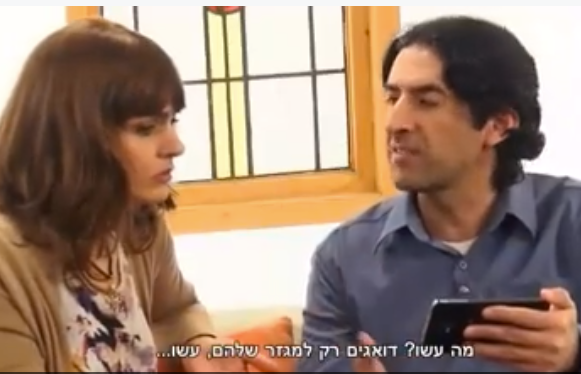 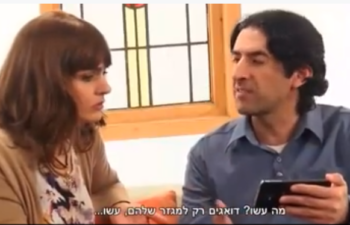 A new commercial is part of the United Torah Judaism party’s effort to reach out to secular voters.

In an Israeli campaign ad released Monday, a secular Israeli husband and wife stress about housing prices, until a member of Knesset pops onto their iPhone screen, touting his party’s economic policies and accomplishments.

It’s a common trope in this campaign — where voters’ top concern, according to polls, is Israel’s high cost of living.

The surprise? That ad, and others like it, came from United Torah Judaism, the Ashkenazi haredi Orthodox party. UTJ is backed by some of Israel’s most traditionalist haredi rabbis — the same rabbis who vehemently discourage smartphone use and whose press organs airbrush women from photos.

UTJ’s polls usually rise and fall with its fiercely loyal haredi voter base. In 2013, the party won a plurality of Jerusalem’s vote due to turnout in the city’s haredi neighborhoods.

This year, the party is making a play for non-haredi votes — complete with a Facebook page — by emphasizing its progressive policies on issues like affordable housing and subsidized daycare. Their slogan this campaign is “socioeconomic legislation isn’t a trend — it’s a mitzvah!”

That campaign, apparently, also allows the party to ease haredi restrictions on women’s appearances and smartphone use.

UTJ includes no women candidates in its slate, and leading haredi newspapers have famously airbrushed leaders like Hillary Clinton and Angela Merkel from photos. But a woman — albeit in a long skirt and long sleeves — plays opposite a man in the party’s ads.

It’s even weirder that the ad features an iPhone. Less than a month ago, leading haredi Rabbi Aharon Yehuda Leib Shteinman, a strong UTJ supporter, declared that anyone using a smartphone can’t be a kosher witness in a rabbinical court — a harsh restriction in the haredi world.

So, does anything go in an election campaign? UTJ spokesman Yaacov Isaac told JTA that the party has run ads like this for years, and “there’s nothing new.”

It’s true that the woman in the ad is dressed modestly and that we don’t explicitly see the couple surfing the Web on the phone. Still, it’s odd to see such apparent flexibility on these prohibitions from a party claiming to represent the interests of Israel’s most traditionalist community.