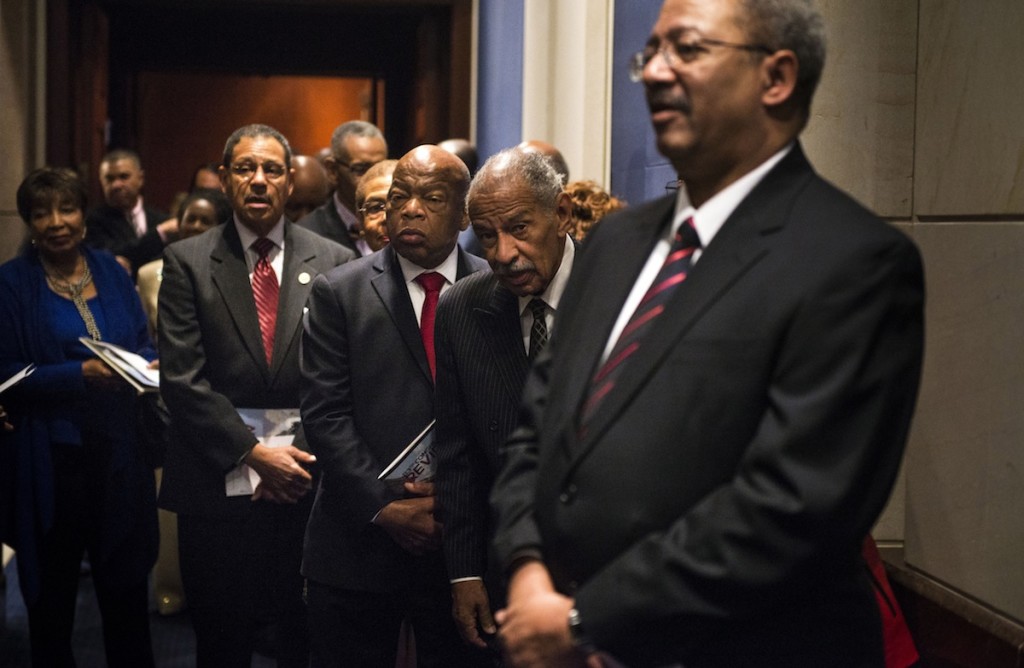 Rep. John Lewis (D-Ga.), third from right, with other members of the Congressional Black Caucus before a ceremony at the U.S. Capitol, Jan. 6, 2015. (Gabriella Demczuk/Getty Images)

WASHINGTON (JTA) — It was not the first time John Lewis had invoked the Jewish-black alliance that fought for equality during the civil rights era. But it was the first time that the Georgia congressman, a civil rights hero, invoked it to explain why he was skipping a speech by an Israeli prime minister.

“In many occasions we have worked side by side to strengthen our democracy and fight for equality and justice in this country,” Lewis (D-Ga.) said at a news conference March 3 where several Democrats who had boycotted Benjamin Netanyahu’s speech earlier in the day explained their absence.

But like many of the 60 lawmakers who chose to sit out Netanyahu’s appearance before a joint session of Congress, where the prime minister railed against the deal the Obama administration is negotiating over Iran’s nuclear program, Lewis saw House Speaker John Boehner’s invitation to Netanyahu to appear on Capitol Hill as a partisan ploy that trumped his traditional support for Israel.

“I am saddened that the speaker would threaten this historic position, bipartisan support of our Israeli brothers and sisters, by this action,” Lewis said. “It is for this reason that I chose not to attend this morning’s address.” 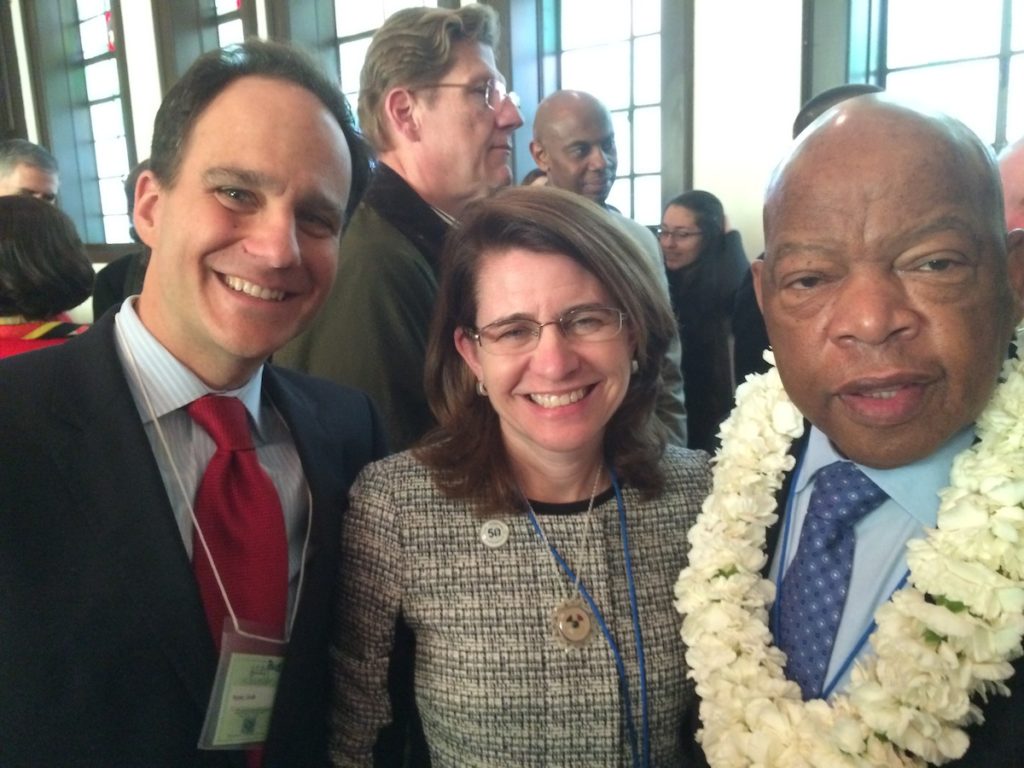 Half the Congressional Black Caucus — 21 of its 42 members — absented themselves from Netanyahu’s speech on March 3, representing more than one-third of the total number of lawmakers who did not attend. Most invoked the intrusion of partisan politics into the historically bipartisan nature of congressional support for Israel to explain their decision.

Among black lawmakers, however, there was something else: An impression among some African-Americans that the invitation to Netanyahu was a sign of disrespect for the first black president of the United States. Rep. Steve Cohen (D-Tenn.) told JTA before the speech that he was under pressure from constituents in his majority African-American district in Memphis not to attend because of the perception that the speech was a slight at Barack Obama.

Caucus members repeatedly insisted that there was no collective decision to boycott, nor should their absence be seen as a comment either on black-Jewish relations or their broader support for Israel. But the absence of so many black lawmakers unsettled figures in both communities invested in the traditional black-Jewish alliance.

“The Jewish community of course was sensitive because I think Jews and blacks expect more from each other,” Charles Rangel (D-N.Y.), the longtime congressman who is close to New York City’s Jewish community, told JTA.

Rabbi Jonah Pesner, the newly installed director of the Reform movement’s Religious Action Center, called the speech “a difficult moment in the relationship.”

The ruckus comes at a sensitive time in black-Jewish relations. Storied allies during the civil rights struggles of the 1960s, the black-Jewish partnership began to unravel amid disagreements over affirmative action and support for Israel, as well as controversies over anti-Jewish jibes by black leaders like Jesse Jackson and Louis Farrakhan.

In recent years there has been a concerted effort to rebuild the alliance, with a focus on the civil rights period as a foundation. The American Israel Public Affairs Committee made black-Jewish relations a focus of its annual conference this month, with one plenary session featuring African-American AIPAC activists who had personal ties through their parents to the civil rights movement. And a number of Jewish organizations — including the Anti-Defamation League, the American Jewish Committee, the Jewish Council for Public Affairs, the Reform movement and Bend the Arc — have called on Congress to reauthorize the landmark Voting Rights Act, parts of which were invalidated by the Supreme Court in 2013. Reauthorizing the act has become a priority for the Congressional Black Caucus.

Lewis, who was savagely beaten by police when marching for voting rights with the Rev. Martin Luther King Jr. in Selma, Ala., 50 years ago, at a symposium on black-Jewish relations at the 2012 Democratic National Convention in Charlotte, N.C., argued for increased interactions between the community’s younger members who have no personal memory of the 1960s coalition.

“If we know each other and understand each other, there would not be a schism,” Lewis said at the time.

Leading black lawmakers have taken pains to put the blame for the speech incident on Boehner and convey their continued support for Israel. At the news conference with Lewis, Rep. G.K. Butterfield (D-N.C.), the caucus chairman, described a phone call he had with Ron Dermer, the Israeli ambassador to Washington who organized the invitation with Boehner, and who agreed to Boehner’s request to keep it secret from the president and congressional Democrats.

“During that telephone conversation I pleaded with the ambassador to seek a postponement of the joint session, but he dismissed that idea,” Butterfield said. “Notwithstanding, I pledged my continued personal support and explained that Israel has many friends in the Congressional Black Caucus, and do not think that Speaker Boehner’s conduct will interfere with our relationship.”

Rangel emphasized that members of the caucus do not blame Netanyahu for the perceived slight and vowed that the relationship with Israel “will never change.” But he made clear that he saw Boehner’s invitation as part of a pattern of Republican disrespect for Obama.

“It shows how far Republicans would go to show hatred of President Obama,” Rangel said. “This would not happen with any other president.”

Rangel attended Netanyahu’s speech, but like many Democrats kept his distance from the Israeli leader, refraining from rushing to shake Netanyahu’s hand as the prime minister made his way to the podium.

Pesner, who attended 50th anniversary commemorations of the Selma march last weekend with Obama and Lewis, said the presence of Jewish leaders was an affirmation of the relationship.

“We need to march together not only to affirm Bloody Sunday,” Pesner said, “but the ongoing relationship between the black and Jewish communities.”