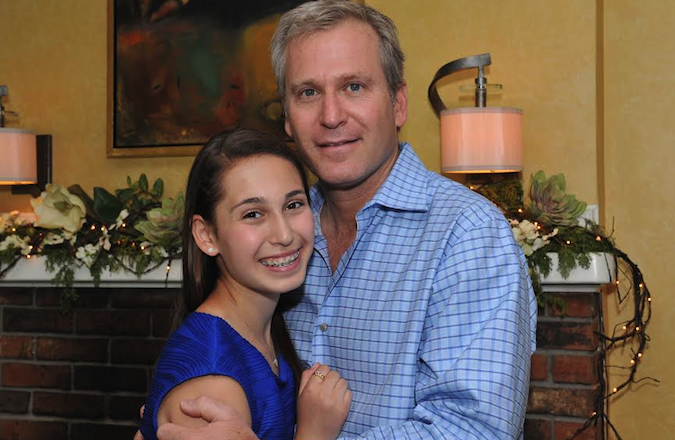 (JTA) — Zoe Butchen didn’t know much about Parkinson’s disease the night her dad, Jeff, told her and her brother at their kitchen table of his recent diagnosis of the disorder.

“I didn’t know what it was or what it meant,” said Butchen, 14. “But I thought that there had to be some way that I could get involved.”

Inspired by the ALS Ice Bucket Challenge – and the Taylor Swift song “Shake it Off” — she decided to post a video to social media of herself dancing to the hit song while challenging others to do the same in the hope of raising money for Parkinson’s research.

Last October, with the support of her family, Butchen, a freshman at Ridgefield High School in Connecticut, launched a website through which donors could give to the Michael J. Fox Foundation for Parkinson’s Research.

Noting the common Parkinson’s symptom of a shaking tremor, Butchen said the Swift song made “just a perfect connection” with her cause and named her viral fundraising campaign Dance/Shake/Donate.

While she doesn’t know the exact number of people who have posted “Shake it Off” videos online, Butchen said she has seen approximately 30 videos, and the campaign has raised over $50,000. There is no end date planned, she added, but her goal is to raise $100,000.

BBYO recently threw its support behind Butchen’s campaign. She spoke in February at the youth movement’s International Convention in Atlanta, and she was named the teen chair of Marathon Madness, a philanthropic initiative that brings Jewish teens together from around the world to support causes that they care about. Butchen said her own BBYO chapter raised $1,500 for Dance/Shake/Donate from their Marathon Madness event held earlier this month.

“[Dance/Shake/Donate] taught me that you need to stand up for what you connect with personally,” she said. “And that I need to be confident and advocate for the things that affect me and my family.”

Butchen spoke to JTA about what qualities she thinks are important in a hero, the advice she’d give to other teens interested in launching a fundraising campaign and the not-so-surprising famous performer whom she’d like to tell about Dance/Shake/Donate.

Butchen: Heroes are people who dedicate their time and effort to a cause that they are passionate about. They have a goal and work towards it and have courage to achieve those goals. They need to be mindful of others and accepting of their ideas.

When I was 8 years old, I went to Israel with my family. It was the most incredible trip. On the day we were leaving, [we were] outside the Western Wall and I started crying because I didn’t want to go. I felt so connected.

I want to be a teacher. I have my mind set on first grade. I like working with younger kids.

What advice would you give to other teens interested in starting a fundraising campaign?

Contact an adult first. They have the best advice and experience. Be true to your idea. Don’t be afraid to fail. At some point it will go far; just run with it.

What sort of things do you like to do for fun?

I am a huge dancer. I dance every day of the week: ballet, tap, jazz, hip-hop, pointe – I love them all. I am involved with the National Charity League doing community service around my town; I really like that. I also collect and donate dance costumes for plays, musicals, recitals to underprivileged kids and organizations in the tristate area.

If you could have lunch or coffee with anyone and tell him or her about Dance/Shake/Donate, who would it be?

I would probably pick Taylor Swift.  I wish I had the opportunity to tell her about [Dance/Shake/Donate]. And not just because it’s her song, but because she’s such a genuine person and gives back to so many causes.