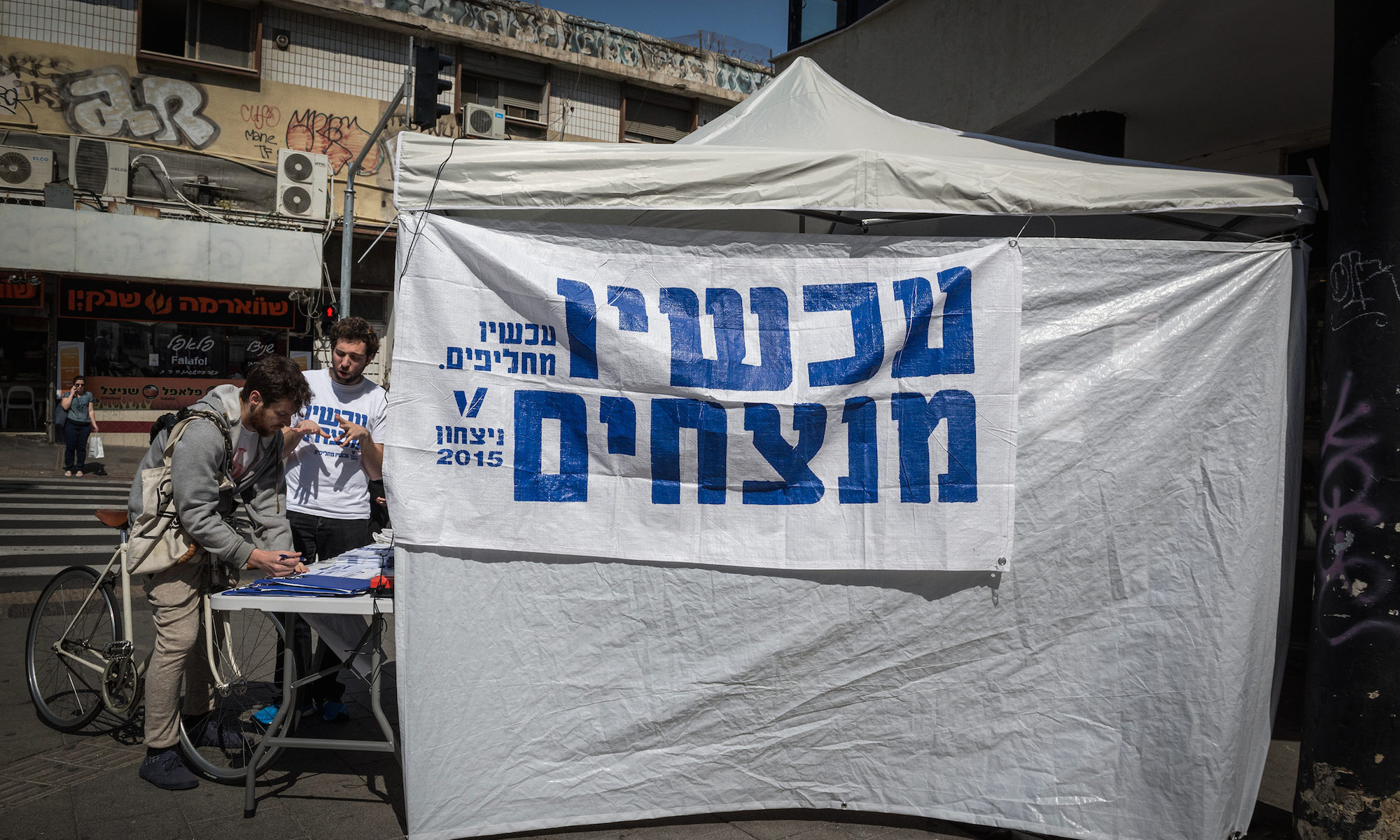 Activists from the V-15 organization, a movement that, among other things, seeks to defeat Prime Minister Benjamin Netanyahu in the upcoming election, set up a tent in central Tel Aviv ahead of the elections, March 15, 2015. (Danielle Shitrit/FLASH90)
Advertisement

Israel’s politicians have spent the past three months telling voters they’re the best choice to serve Israel. But their success tomorrow will depend not just on whom they convince, but on how many of their supporters make it to the ballot box.

Since 2001, voter turnout in Israel has hovered around 65 percent, and the right wing or its offshoots has won every election. But this year, according to Israeli Channel 2, around 80 percent of Israel’s nearly 6 million voters plan to cast ballots.

That rise in turnout could be good news for the left. The last two times Labor has won the election, in 1992 and 1999, voter turnout was about 77 and 78 percent, respectively. Nimrod Dweck, the executive director of V15 — which aims to draw center-left voters to the polls — told JTA that an increase of just 5 percent over last year’s 67 percent turnout could make the difference for Isaac Herzog, who heads the center-left Zionist Union.

This hasn’t escaped the notice of Prime Minister Benjamin Netanyahu, who exhorted tens of thousands of right-wingers at a rally last night to fight V15 (he mentioned it several times by name) and go “house to house, street to street, neighborhood to neighborhood” and to “come in masses to the ballot.”

But Netanyahu’s largely religious audience — clad in the trademark large knit kippot and modest dress of the hawkish religious Zionist crowd — won’t need convincing. Settlers, religious Israelis and their supporters — perhaps out of strong ideology, or fear of a left-wing government that might negotiate away their homes — have generally had higher-than-average turnout.

In 2013, three of the top four cities with the highest turnout were settlements, each with turnout above 84 percent. Many haredi Orthodox neighborhoods of Jerusalem also had above-average turnout, in the 70 or 80 percent range, giving the haredi UTJ party a plurality of the vote in Israel’s capital.

On the flip side, Arab Israeli voters, and those living in Israel’s often economically disadvantaged periphery, generally do not vote as much as the average Israeli. Arab turnout was 10 percentage points lower than average last year, due in part to the little influence that Arab parties have in the Knesset. Peripheral cities like Ashkelon, Sderot and Beersheva, whose residents also complain often of government neglect, posted similarly low voting rates.

In a video urging Israelis to vote, President Reuven Rivlin says “apathy and despair aren’t an option,” even as he refuses to tell a (fake) police officer whom he’s voting for.

And at least among Arabs, the get-out-the-vote drive seems to be working. Galvanized by a new united Arab party — the Joint Arab List — with a charismatic leader, Arab voter turnout is expected to top 60 percent this year.

Tomorrow, we’ll see if those higher numbers — among Arab-Israelis and across the board — have an impact on who wins and loses.