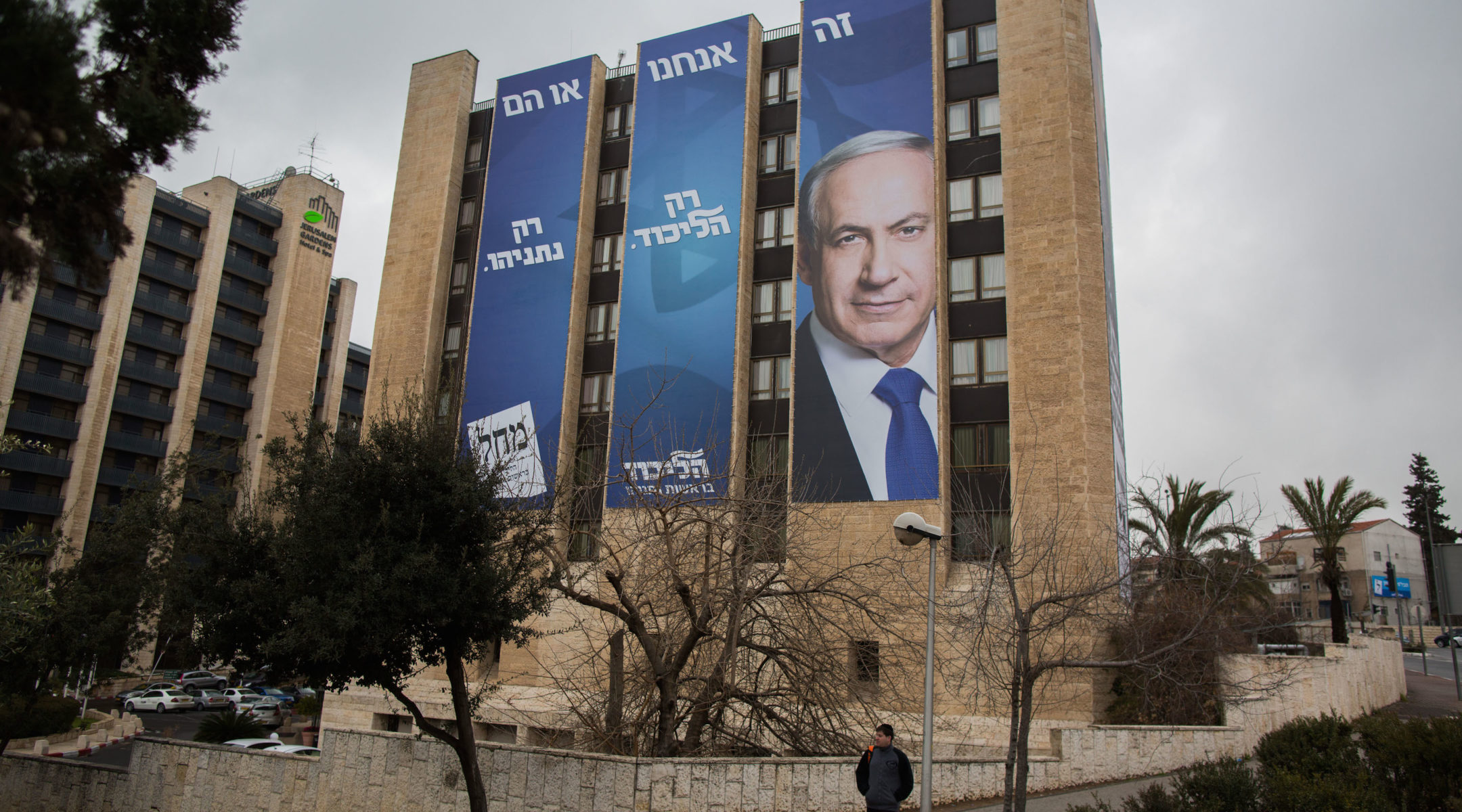 One of Prime MInister Benjamin Netanyahu and Likud's campaign posters on a building in Jerusalem. The slogan at top reads: "It's us or them." (Yonatan Sindel/Flash90)
Advertisement

But with his Likud party trailing in the polls just a few days before Israel’s election on Tuesday, that all changed. Netanyahu conducted a series of interviews with Israeli journalists over the weekend in an effort to shore up votes from his right-wing base.

He spoke to Israeli news website Walla, the Jerusalem Post, the Times of Israel and twice to Israeli Channel 2. The second Channel 2 interview even began with a short, impromptu and somewhat awkward debate between Netanyahu and Isaac Herzog, whose center-left Zionist Union is leading the polls.

The debate — an unexpected treat in an electoral system usually devoid of such tete-a-tetes — lasted all of three minutes, with Netanyahu speaking via video feed while Herzog sat in the Channel 2 studios. Netanyahu managed to keep the conversation focused on his perceived forte — security and diplomacy.

He accused Herzog and Zionist Union co-chair Tzipi Livni of angling to cede East Jerusalem to the Palestinian Authority and opposing Israeli construction there, which Herzog denied. When Herzog tried to change the subject, asking Netanyahu if he’d give up the premiership should Herzog receive more votes, Netanyahu didn’t answer.

“Their policy is to capitulate to every dictate,” Netanyahu said. “Someone in the international community demands something, they bow their heads right away and say ‘OK, we’ll capitulate,’ because they aren’t able to really take a stand, and to take a real position on our essential interests.”

Herzog shot back that Netanyahu doesn’t have the world’s ear and said the prime minister’s conduct has driven the Palestinians to abandon bilateral talks with Israel.

In his various media appearances, Netanyahu focused his messaging on three assertions: Right-wingers need to unite behind Likud, rather than its satellite parties; he’s trailing in polls because of an “unprecedented” international campaign against him, and he accused his opponents of wanting to yield to international pressure.

Netanyahu said several times across the interviews — accurately, according to polls — that a majority of Israelis deems him more fit to be prime minister than Herzog. His party is lagging, he said, because traditional Likud voters have chosen to vote for parties like Jewish Home, Israel Beiteinu and Kulanu — right-wing or center-right parties all headed by former Netanyahu deputies who left Likud. For him to get reelected, he said, those voters need to come back to him and his party.

“People don’t have a privilege of splitting their vote, to vote for Jewish Home, because Likud’s seats are falling,” he told Walla. “We’ll get [Livni and Herzog] as prime ministers.”

Netanyahu blamed his campaign troubles on “tens of millions of dollars” from foreign donors to fund campaign strategists opposing him, and he mentioned one organization by name — V15, which is aiming to increase center-left voter turnout.

Netanyahu told Channel 2 that most Israelis back him “even after these huge efforts, the giant campaigns they did, the powerful money coming from abroad … There are governments helping NGOS with ‘Anyone but Bibi,’ to get out the Arab vote, to get out the left-wing vote.”

He also admonished publications that have criticized him, in particular Yediot Aharonot, which has run critical coverage of his term in office. Supporting Netanyahu is Israel Hayom — a free daily paper bankrolled by American casino mogul and Netanyahu backer Sheldon Adelson. Even though Israel Hayom is the country’s most-read newspaper, Netanyahu told the Times of Israel it was a “drop in the bucket” compared to the myriad efforts against him.

The bulk of the interviews dealt with local issues, with Netanyahu’s characteristically aggressive Israeli interlocutors pressing him on Israel’s housing crisis, excessive spending at his personal residences and a Likud video that compared Israeli government workers to Hamas — for which Netanyahu apologized.

Netanyahu sounded most confident when it came to opposing the Iranian nuclear program and taking a hard line on concessions to the Palestinians. The prime minister claimed that while he’s willing to stand up even to allies — as he did in his speech to Congress earlier this month — Herzog and Livni have less backbone.

“The trouble is, the Palestinians, half are controlled by an Iranian power in Gaza and half are on their way there,” he told Walla. “I said sincerely that any proposal for withdrawal, if we execute it, will give us not peace, not coexistence, not a demilitarized [Palestinian] state, but an armed state that will threaten Israel.”

The interview circuit even contained a pair of gaffes — once each from Netanyahu and Herzog. Netanyahu, speaking to the Jerusalem Post, blamed the now-defunct centrist Kadima party for withdrawing from Gaza in 2006. In fact, it was Likud that withdrew from Gaza in 2005, ahead of Kadima’s founding — a move Netanyahu supported at the time.

And responding to the prime minister during the debate, Herzog accidentally declared he would “ensure a united Netanyahu under Israeli sovereignty,” giving his opponent a hearty laugh. Presumably, Herzog meant to say a united Jerusalem, though he did not seem to catch his mistake.