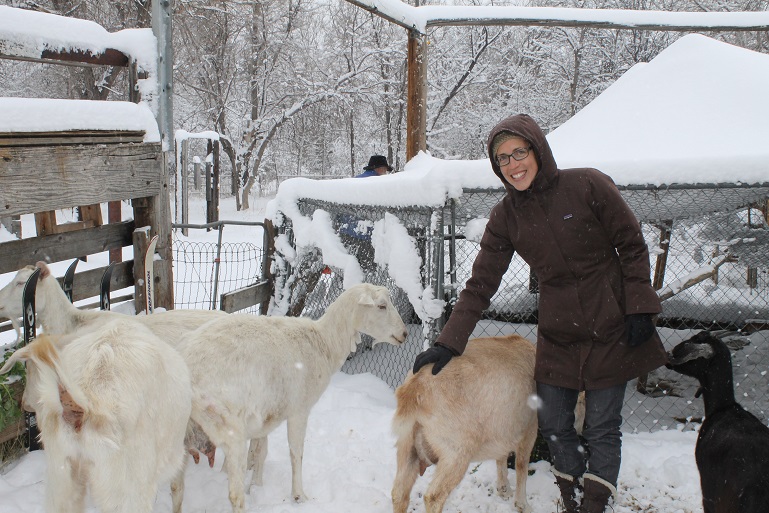 Becca Weaver, farm and sustainability director for Boulder's JCC, says that getting out and spending an hour or so milking the goats at the JCC's co op is great therapy for the average person. (Uriel Heilman)
Advertisement

BOULDER, Colo. (JTA) – There’s not much to see yet at the site of this city’s new Jewish community center, just some trailers and earth-moving equipment covered in snow.

But the first inhabitants already are on site living in a pair of sheds. Though it’s cold, they don’t complain much. That’s because they’re goats and chickens.

With five goats and some 40 hens, the animal farm is a key part of the $27 million center slated to open on 12 acres in the summer of 2016. Already operating as a co-op for fresh eggs and goat’s milk, the farm is also one of the elements that makes this JCC highly unusual. Here are a few others: The JCC will have no full-service gym or indoor swimming pool – or membership fees.

“I think the whole idea of what Jewish engagement is in the 21st century has been changing,” Jonathan Lev, executive director of the Boulder JCC, told JTA. “We want to capture what people love and overlay it with Jewish values. For many, coming to the farm and milking goats and taking care of the chickens is their Jewish engagement.”

Boulder’s JCC, founded in 2005 and currently located on a smaller site elsewhere in town, is focused on its preschool and community programming rather than on membership. The institution is guided by four pillars reflective of values dear to local Jews and Boulder residents generally: food and wellness; innovation; arts and culture; and early childhood education. Its $2.7 million operating budget is covered by program fees and fundraising.

For the innovation pillar, the JCC launched a Jewish overnight entrepreneurship camp last summer, Camp Inc., in Steamboat Springs. For arts and culture, Lev cites Boulder’s annual Jewish film festival, now in its third year and held every March. On early childhood education, the JCC’s popular preschool is one of four getting special support from the Rose Community Foundation, the Union for Reform Judaism and the JCC Association to increase enrollment and build stronger Jewish connections.

The farm is the anchor of the food and wellness piece. Some 20 family members already belong to the co-op, taking shifts about once a week to clean poop, refresh the feed and milk the goats by hand. In exchange, they receive fresh milk and eggs. The farm, which may be the only Jewish animal husbandry co-op in the country, is also open to occasional milkers and the wider Jewish community. 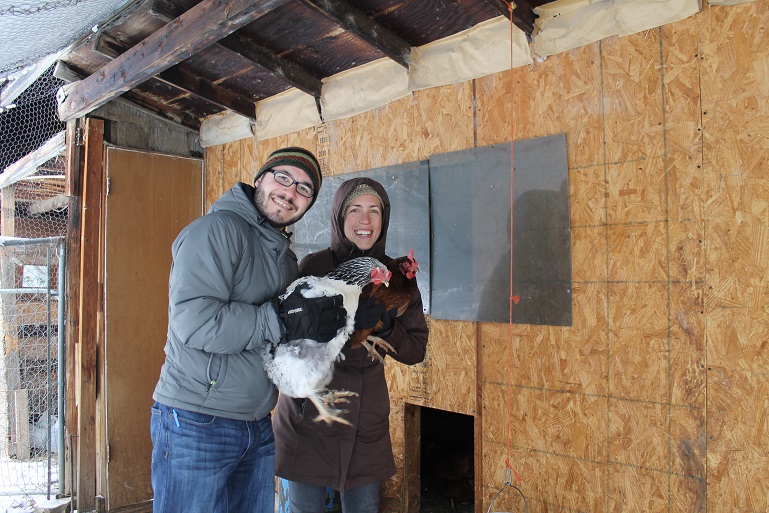 Some 40 hens and five goats are part of the co-op at the future site of the Boulder JCC, where Jonathan Lev is executive director and Becca Weaver is farm and sustainability director. (Uriel Heilman)

“The farm is this idea of connecting people, having them engage in something meaningful and building community around it,” said Lev, 36, who at the time of his hire in 2010 was the youngest JCC director in the country – as well as the fledgling JCC’s first full-time employee. “Twenty-first century Judaism and Jewish life is determined by the connection points people make. People are searching for meaning. And they’re finding it in unique ways. People go to farms on a regular basis here. What would it mean for them to go to a Jewish farm?”

Last year, when one of the goats went into labor on Purim, holiday revelers in costume came to watch the birth, naming the newborn Vashti after the Persian queen from the Book of Esther. Now three of the five goats are pregnant, with due dates around Passover – perfect timing to turn the milk into cheese by Shavuot, a holiday traditionally focused on dairy foods.

“Getting to go out for a visit with the animals is really great therapy for the average person,” said Becca Weaver, the JCC’s farm and sustainability director. “A lot of people do other things, sit at a computer all day. Getting out and bonding with the animals is very intimate and tactile.”

Then there’s the Jewish social justice component. The community decided to stop milking the pregnant goats several weeks before their due dates to adhere to the traditional injunction against causing animals unnecessary distress. When new chicks are brought to the farm, they’ll come from humane breeding operations rather than the “cruelty of the industrial food system,” Weaver said.

Weaver’s parents’ family charity, the Oreg Foundation, donated the land on which the JCC is being built – part of a 32-acre parcel the family foundation purchased 15 years ago for a future Jewish community campus.

“The JCC is the first recipient of a land grant from the foundation,”said Julie Shaffer, executive director of the Oreg Foundation. “It’s Oreg Foundation’s hope that there will be other community institutions that will come forward and want to be on the campus.” 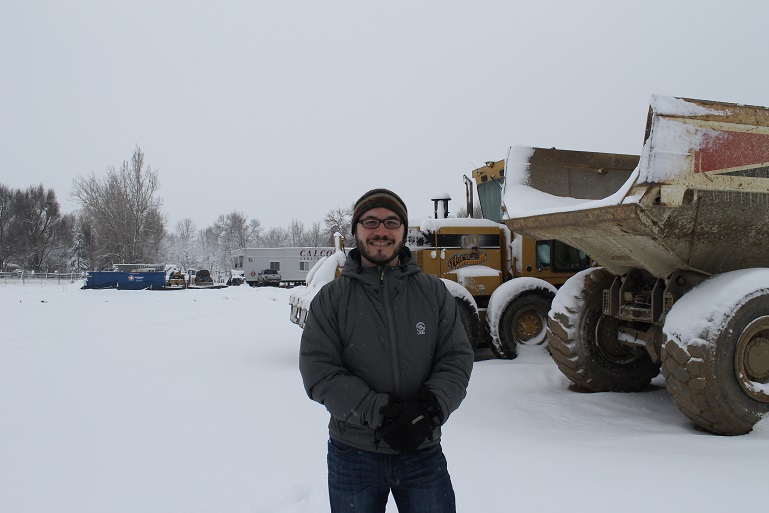 Jonathan Lev, executive director of the Boulder JCC, stands at the site of the new $27 million JCC slated to open in 2016. (Uriel Heilman)

When it’s complete, the JCC will house a preschool, social hall, meeting rooms, yoga studio, sports fields, playgrounds and summer camp facilities. Two acres will be devoted to the farm, which will include greens, strawberries, raspberries, apples, plums and beehives. There will be handicapped-accessible raised beds, an outdoor kitchen and child-friendly education space. The veggies will be organic and excess food will be donated to the Boulder Food Rescue, which collects donations by bicycle to avoid using fossil fuels. In keeping with the focus on high environmental standards, the JCC building will be LEED-certified.

It’s all very Boulder – a university town of some 100,000 with the social consciousness of Park Slope, Brooklyn, the entrepreneurial spirit of Silicon Valley, and the farming and ranching sensibility of the West.

Boulder’s Jewish community is relatively young and growing quickly. The most recent Jewish demographic survey, in 2007, found about 13,000 Jews living in 7,600 Jewish households in Boulder County, located about 40 minutes northwest of Denver.

“A lot of these people have zero affiliation or interest in Jewish community,” Lev said. “But the possibility of engagement is tremendous because of the large Jewish population.”

Half a century ago, there was just one synagogue in town. But the Jewish presence grew considerably as technology companies moved to the city, the university grew and Boulder’s location in the foothills of the Rockies drew outdoors enthusiasts. Rabbi Zalman Schachter-Shalomi, the father of the Jewish Renewal movement, moved here in 1995. The University of Colorado-Boulder launched a Jewish studies program in 2007 and now has a kosher eatery. Boulder has two Jewish Renewal synagogues, a couple of Chabad centers and one Reform, one Orthodox and one Conservative shul. An online Jewish news site, Boulder Jewish News, was launched in 2009.

At the JCC, the budget has more than doubled since Lev came on in 2010, and he said 4,000 people were reached last year through programming.

“The JCC provides so many portals into Jewish life,” Oreg’s Shaffer said. “This community offered Jonathan opportunities for professional growth, and he’s paying us back many times over for his vision of what this community can be.”