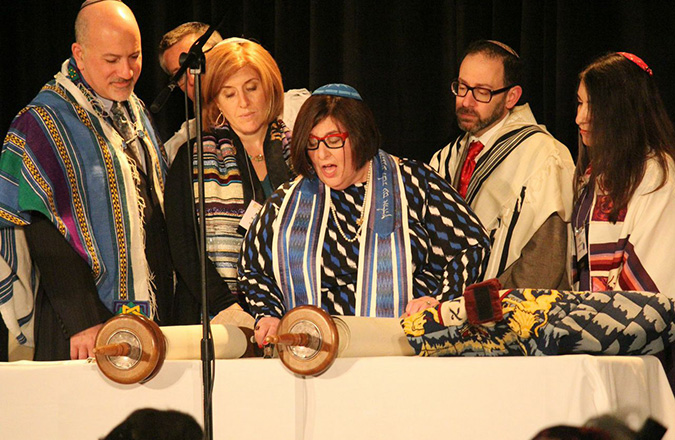 PHILADELPHIA (JTA) — In 1988, her sexual identity a semi-open secret, newly ordained Rabbi Denise Eger had trouble landing a job. Decades on, Eger has risen to the top of her profession, installed Monday as president of Reform Judaism’s Central Conference of American Rabbis.

She is the first openly gay person to lead the organization, which is composed of more than 2,000 rabbis affiliated with America’s largest Jewish denomination.

Eger’s installation took place as the Reform rabbinical association marked the 25th anniversary of its groundbreaking 1990 resolution calling for the ordination of openly gay rabbis.

“I never intended to be a gay activist or to be ‘the lesbian rabbi,’ which is ironic because I know that’s the only thing the headlines will say, because I’m more than that,” Eger, 55, told JTA at the annual CCAR conference, held here Sunday to Wednesday. “Maybe they’re shocked to find at the beginning that she’s a lesbian president and that I’m breaking some ceiling, but I was elected because I’ve been a dedicated pastor and rabbi for more than 25 years.”

Eger is the founding rabbi of Congregation Kol Ami in West Hollywood, Calif., and has led the Reform congregation since 1992. She previously served as the spiritual leader of Los Angeles’ Congregation Beth Chayim Chadashim, which Eger describes as “a gay outreach synagogue.” It was the only congregation that would hire her after her ordination, she said.

She has been on the CCAR Board of Trustees for four years. Eger was the first female and first openly gay president of the Board of Rabbis of Southern California, and was a founding member of the Religion Council of the Human Rights Campaign, an LGBT rights organization.

Eger is engaged to be married to Rabbi Eleanor Steinman.

Among those at the CCAR conference, there were mixed feelings about the attention surrounding the groundbreaking nature of her position.

Rabbi Emma Gottlieb of Temple Beth David in Canton, Mass., said that Eger’s ascension was “a wonderful milestone, but it just calls our attention to how much work there is still to be done,” given all the attention garnered by the barrier-breaking nature of her presidency.

But for Rabbi Harry Danziger, a former CCAR president who last year marked 50 years in the rabbinate, Eger’s appointment feels especially momentous given that much of his career preceded the acceptance of gays into the Reform rabbinate.

“Within the conference, within the movement, I found that when we had resolutions that were related to gender I wasn’t voting on the resolution, I was voting on my friend Denise, on my friend so-and-so,” he said.

Danziger, who was Eger’s childhood rabbi in Memphis, Tenn., recalled an anecdote from her youth.

“In those days, we had very formal confirmations — organ, choir, the works,” he said. “Her classmates came to me and said, ‘Could Denise play the guitar and sing something at our confirmation?’ So she was a groundbreaker then as she is today.”

Although Eger’s appointment is a first for the Reform movement, the smaller Reconstructionist Rabbinical Association has had two openly gay presidents since 2007.

At the CCAR conference, Rabbi Ben Sternman of Adat Chaverim in Plano, Texas, a 12-year veteran of the Reform rabbinate, said he has noticed significant progress for gay rabbis like himself since his ordination.

Despite the 1990 resolution, Sternman noted that there was still dissent in the ranks when he was ordained at HUC-JIR. At that time, he recalled, one of his professors “would not sign ‘smichah’ [ordination] for anyone who was GLBT. I went and spoke to him for 45 minutes, trying to convince him to sign my smichah, and he refused, flat-out refused.”

The CCAR convention, which included sessions on human rights, the Reform movement’s forthcoming new High Holidays prayer book and the Israeli election, drew some 550 rabbis, many of whom cited professional development and peer networking as their reason for attending.

Sternman said he looks forward to the CCAR conference, because it’s “a place where I’m just Ben and not Rabbi. Look at my name tag: just Ben.”

“There’s a certain energy in the room when all the rabbis get together and we’re able to just bring our minds and passions and energies together,” said Rabbi Marci Bellows of Temple B’nai Torah in Wantagh, N.Y. “There’s a magic to it. And I feel like I learn things, and I come away renewed and recharged and professionally reinvigorated in a way that just kind of jump-starts my year.”

Eger said that during her two-year term as president, she plans to introduce new continuing education requirements for Reform rabbis and increase partnerships with Reform communities in Europe and Israel. The CCAR is set to release the High Holidays prayer book, or machzor, in time for Rosh Hashanah. Titled Mishkan HaNefesh, it will include many feminist and LGBT voices.

“I hope that the larger Jewish community will come to know me in the next two years and learn that about me,” Eger told JTA, “that I’m devoted to the Jewish people and to the state of Israel, and I want it to be a place that’s truly a place of justice for all the peoples that live there, a place where any Jew is welcome, no matter how they daven, to be a place truly of welcome. We don’t have any Jews to waste. That’s what I’ve learned.”