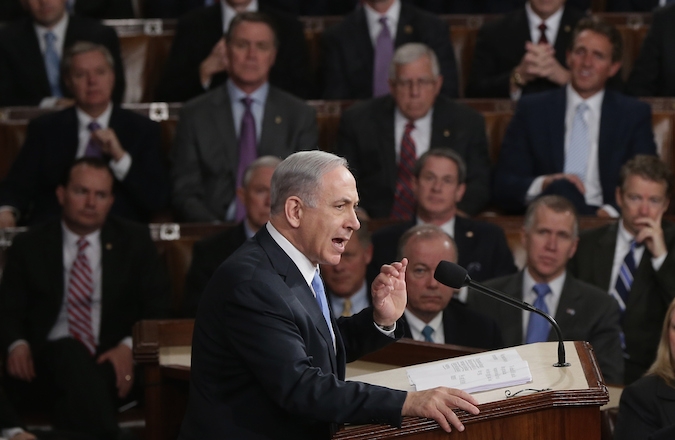 WASHINGTON (JTA) — Israeli Prime Minister Benjamin Netanyahu said he was invested in a two-state solution and could tolerate a number of Iranian uranium enrichment centrifuges.

Netanyahu’s first major post-election interview Thursday, on MSNBC, appeared aimed at calming the Obama administration’s  anger at his retreat just before the election from a two-state solution, telling Israeli media that it would not happen on his watch.

In his latest interview, Netanyahu said that what he meant was that the Palestinians and the region was not ready for two states, citing among other things the Islamist-fomented turmoil in neighboring lands and the nominal working arrangement between the Palestinian Authority and the Hamas terrorist group.

Obama administration spokesmen said the comments from earlier in the week were still a concern.

“The prime minister’s comments from a few days ago brought into question his commitment” to a two-state solution, Jen Psaki, the State Department spokeswoman, said after noting that she was aware of Netanyahu’s newer comments in the MSNBC interview. “We can’t forget about those comments.”

Josh Earnest, the White House spokesman, said the administration was still reevaluating how it approaches diplomacy in the region in the wake of Netanyahu’s earlier apparent retreat from the two-state solution.

“What is apparent is that in the context of the campaign and while he was the sitting prime minister of Israel he walked back from commitments that Israel had previously made to a two state solution,” Earnest said Thursday, noting that he, like Psaki, was aware of Netanyahu’s more recent comments. “It is as we mentioned yesterday cause for the United States to evaluate what our path is forward given the prime minister’s comments.”

“The prime minister is trying the heal and they’re not willing to move in that direction,” he said.

Netanyahu also said in the MSNBC interview that he did not mean to disrespect President Barack Obama with his March 3 speech to Congress, organized in secret with the congressional Republican leadership. He said he expected to continue working closely with Obama.

Netanyahu in the speech had opposed the Obama administration’s backing for nuclear talks underway between Iran and the major powers. In the MSNBC interview, however, he made a significant concession, saying Israel could tolerate a limited uranium enrichment capacity for Iran, although with a number lower than the 6,500 reported to be part of an emerging deal.

“A smaller number is something Israel and its Arab neighbors wouldn’t love but could live with,” he said. Previously, Netanyahu had insisted on zero enrichment capacity for Iran.

Netanyahu sidestepped a question about his warning in a video to his supporters on election day that “droves of Arab voters” were heading to the polls. The White House condemned the call as “divisive.”

Netanyahu said he “was trying to counter a foreign-funded effort to get votes to topple my party,” although he would not identify who funded this effort.

Earnest, the White House spokesman, for the second day in a row sharply criticized the election day video.

“That cynical election day tactic was a pretty transparent effort to marginalize Arab Israeli citizens,” Earnest said, adding that the comments “stand in direct contrast” to values shared by the United States and Israel.