Tips for hosting a disabilities-friendly seder 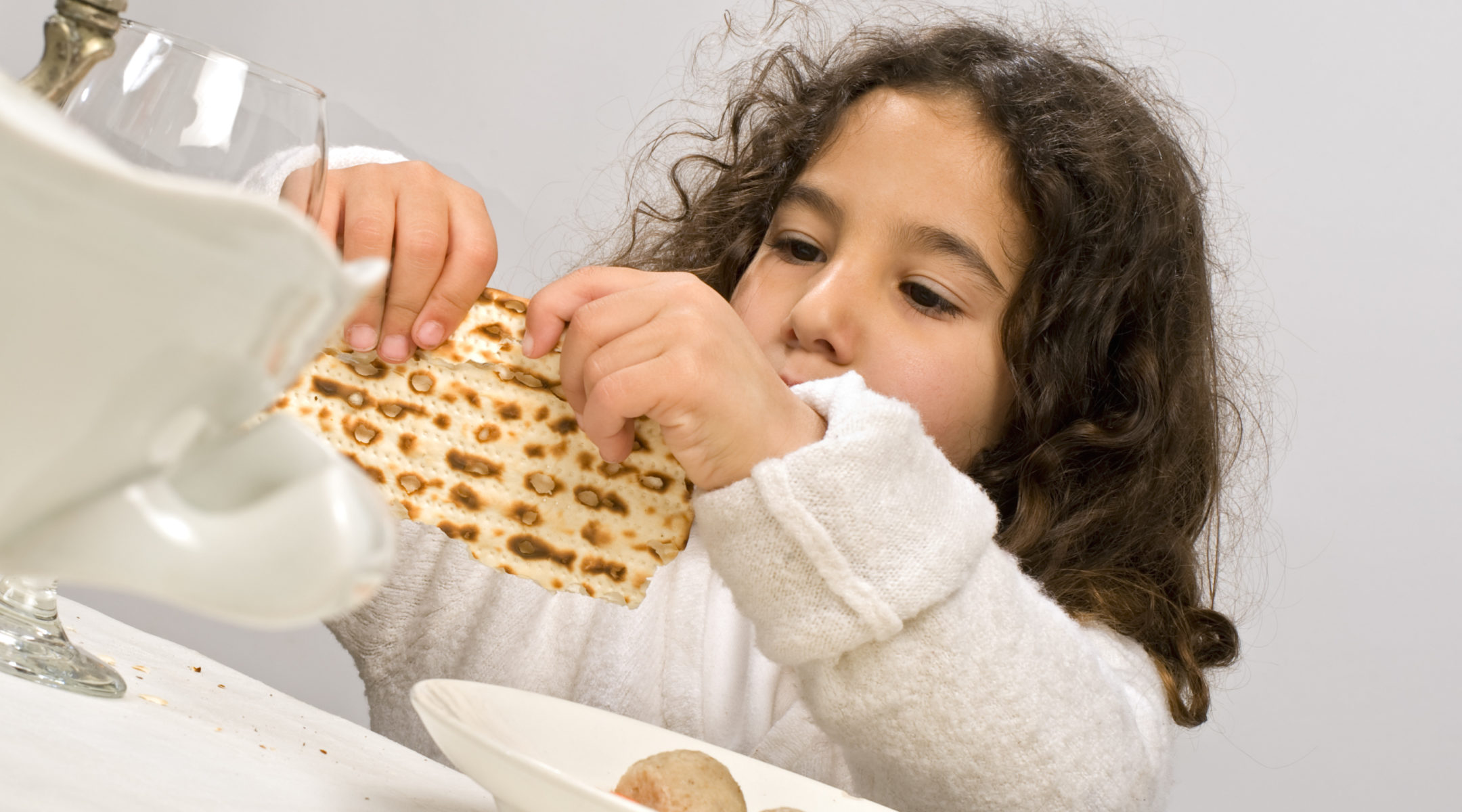 (JTA) — I knew when we got to the drawing of the sad-looking lamb that I had exactly one page before showtime.

As the youngest daughter and cousin on both sides of my family, reading the Four Questions was always my job at the Passover seder. Since my severe obsessive-compulsive disorder compelled me to recite everything exactly right, the job was so nerve-racking to me that I often started panting days before.

For some children, the seder means delicious jellied candies and afikomen hunts. For others it can mean terrifying public reading and unbearable amounts of sitting still at the table. And for those disabilities – whether psychological, developmental or language-based – it’s clear this night is different from all other nights. But can somebody slow down and please explain why?

According to the U.S. Census, 18.6 percent of Americans (approximately 1 in 5) have a disability. Jay Ruderman, president of the Ruderman Family Foundation, which promotes and funds inclusion in the Jewish community, estimates that 2 million Jews are among that 18.6 percent. Many disabilities are undetectable to the naked eye, but whether it’s a child with Attention Deficit Disorder who finds it hard to sit still at the table or an adult in a wheelchair who cannot get to the table, guests with disabilities often require some modifications in order to feel welcome and included at the seder.

Fortunately, such modifications are not difficult and can make the seder more enjoyable for everyone. After all, who hasn’t at least occasionally experienced seder table boredom?

Meredith Englander Polsky, co-founder of Matan, a New York nonprofit that advocates for Jewish students with disabilities, says the seder is “the perfect opportunity for inclusion” because it involves multiple senses and learning styles: “taste, touch, acting things out, singing, speaking and listening.”

Here are some tips:

1. Give a sneak preview!

Talk to children beforehand about what exactly the seder will look like. They can also help prepare the seder plate: a great opportunity to sniff the bitter herbs, taste the charoset or even crumble the matzah. 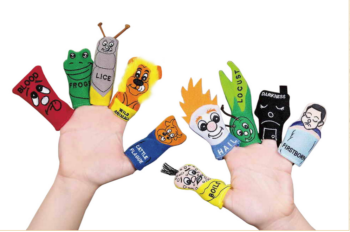 Passover toys, such as these Ten Plagues finger puppets, can help engage children in the seder. (Traditions Jewish Gifts)

Both Matan and and Gateways, a Boston program that helps Jewish day schools and congregational schools be inclusive of students with disabilities, have numerous downloadable materials on their websites, including “seder trackers” and Passover Bingo cards that spell out the order of events in bright pictures. Gateways has just published a colorful new Haggadah designed specifically for children with disabilities. Another possibility: Passover toys, like matzah juggling balls or plague finger puppets, which can be found in many online outlets and Judaica stores.

On www.challahcrumbs.com, an educational website she started, Devorah Katz suggests on her site creating your own family Haggadah with your favorite photographs. Whatever you choose to bring to your seder, make sure everyone feels welcome to participate.

Ilana Ruskay-Kidd, founder and head of The Shefa School, a pluralistic Jewish day school for children with language-based learning disabilities, suggests conducting the first part of the seder in the living room. It’s a much more relaxed environment than sitting at the table, and guests can get up and walk around if they need to, or even have a few snacks. Matan’s Polsky says it’s also good to set aside a “quiet space” to relax for guests who become overwhelmed by crowds or noise. 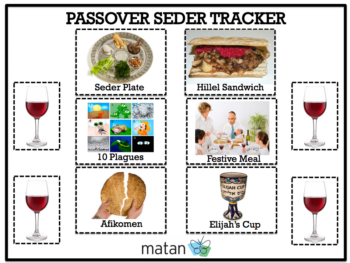 This seder tracker is one of many free downloadable resources available from Gateways and Matan. (Matan)

The maggid (recitation of the Hagaddah) is the longest stretch of time for children to be at attention, so it’s imperative to make it exciting and interactive. Some suggestions from Polsky and Ruskay-Kidd:

Pyramid building: You can set up stations in your home or on the table. Use Legos, Lincoln Logs, MagnaTiles or any other building materials you find. A delicious option: try mini-marshmallows and toothpicks. Everyone gets to build a pyramid that can later be gobbled up for dessert.

Schlep: Ask children to act out being a slave by carrying a heavy bag of books over his or her shoulder and pretending that it is bricks.

Split the sea: Hold up blue sheets and have children walk through them.

Play out the plagues: Act out the plagues such as jumping like frogs or falling over like cattle. Download Matan’s visual Ten Plagues so everyone can see them and debate whether they’d rather be a grasshopper or a locust. You can “paint” the doorways with a paintbrush and water so the Angel of Death knows to pass over.

Cut to the chase: If guests are getting too hungry or restless, it’s best to skip a few pages or cut to the songs. The maggid can be two minutes or two hours, but the message will only resonate if people are engaged.

Giving everyone a break is vital to the seder experience. Ruskay-Kidd says, “We don’t want our kids to experience enslavement during the seder.” After the intermission (and before things start getting messy with the Hillel sandwich, etc.) is a great time to get people seated at the table.

The Passover seder is full of timeless questions, and there is no one right answer. Encourage everyone to pose a question.

Polsky points to the maror as a jumping-off point. She asks everyone to name something “bitter” they would like to fix in the world and how they plan to do it.

Whatever makes everyone join in singing is the way to go. Polsky notes that“Who Knows One” can be difficult for people with disabilities because there are so many verses and it is frequently sung fast.

Download Matan’s visual version of “Who Knows One” so everyone can follow along; percussionists and yodelers encouraged. Shouting is a form of singing, too.

In fact, Ruderman, of the Ruderman Family Foundation, says there’s an old story about a boy in Eastern Europe who couldn’t read or write. He came to the High Holidays services and kept on shouting in the synagogue while people were trying to pray. Many of the congregants wanted to have him kicked out but the rabbi stopped them and said, “Just listen. He’s expressing his prayer in the purest way.”

I think of this boy and his direct connection to faith.

I think of my younger self, trembling in my seat, reciting Mah Nishtanah under my breath.

I think of the 2 million Jews estimated to have disabilities who will hopefully be participating in the seder this year. And I promise this: I won’t be the youngest at the table this year, but I do intend to be the loudest.

Most likely off-key too.

(Abby Sher is a writer and performer living in Brooklyn. She is the author of “Amen, Amen, Amen: Memoir of a Girl Who Couldn’t Stop Praying (Among Other Things)” and “Breaking Free: True Stories of Girls Who Escaped Modern Slavery.” Her writing has also appeared in The New York Times, the Los Angeles Times and Elle magazine, among other publications.)