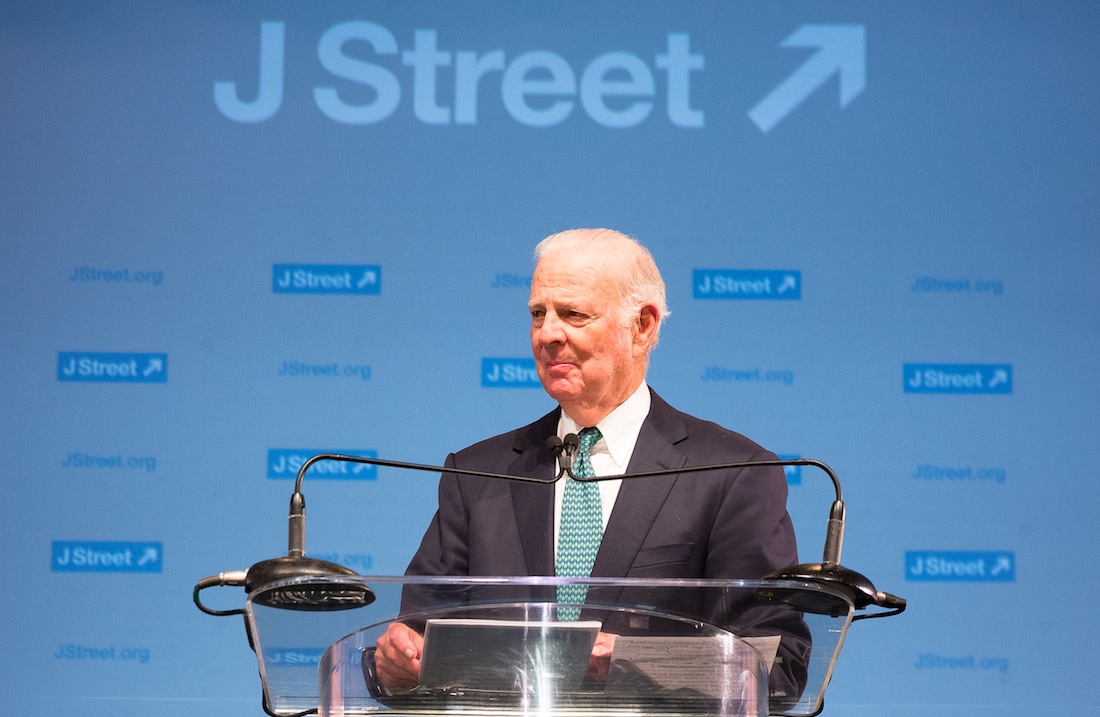 J Street’s youthful activists delivered a big chunk of conference time to James Baker, an octogenarian known for cursing out their parents.

Baker, who as George H.W. Bush’s secretary of state back in 1991 is reported to have said “F— the Jews” since they don’t vote for Republicans anyway, delivered a well-received speech to the conference Monday night that was interrupted repeatedly by applause.

A third of the 3,000 people attending the conference this week are students, born after Baker left government and with no living memory of Baker’s leaked riposte to a fellow Cabinet official who worried how Jews would react to a long forgotten piece of diplomacy.

But it would be facile to chalk up the admiration for Baker to short political memories, or to mere pranksterism — a tweaking of the Jewish establishment by inviting its bugbear, a supposed icon of heartland American hostility to the Jews, to be a keynote speaker. There are, in fact, two substantive reasons for J Street to cultivate Jim Baker: One readily on display Monday evening, and one that didn’t get mentioned.

First, what was not said: Baker, 84, is back in the news because he is a lead foreign policy adviser to his old boss’s son, Jeb Bush, the former Florida governor now angling for the presidency.

J Street longs to be associated with the word “bipartisan” the way white wants to join with bread in Baker’s home state of Texas, and yet the lobby remains overwhelmingly Democratic. Rep. Walter Jones (R-N.C.) — he of Freedom Fries fame — a southern Republican whose eccentric conspiracy thinking seem drawn from all-caps newsletters, was one of only two Republicans J Street’s PAC endorsed last year, a match made for buffs of political exotica — the excitable embracing the eccentric.

Baker and the younger Bush represent a different universe entirely — the GOP establishment defined. Friendly relations with a top Bush campaign adviser would go some distance to erasing J Street founder Jeremy Ben-Ami’s famous quote in 2009 about being President Barack Obama’s “blocking back” in Congress, a comment that still haunts the group like a bad date who fell asleep on the couch.

The more obvious reason Baker got the room for an hour was his style: He and Bush stood up to Israel and the pro-Israel lobby and were proud of it.

As secretary of state, Baker embodied a robust diplomacy that unapologetically expressed American power — power not, incidentally, exercised solely against the government of Israel. Baker recalled at the outset of his J Street talk that his administration saw the first major defeat of Saddam Hussein, in Kuwait, the collapse of the Soviet Union, the liberation of eastern Europe.

And a week after Netanyahu appeared to have trashed the two-state solution, a month after he defied President Barack Obama with a speech to Congress, it was Baker’s standing up to Israel that excited this crowd. In his genteel homestate drawl, Baker described the crisis over the 1991 $10 billion in loan guarantees Israel wanted to help absorb a flood of Soviet Jews, and how it was resolved.

I was told personally by Prime Minister Shamir that Israel’s friends in Washington had told him Israel could get the money from Congress, and as a result they would not agree to postpone their request for the loan guarantees.

After a battle royal on Capitol Hill, Congress ended up voting down a bill that would have granted Israel the loan guarantees over President Bush’s objection.

Translation: I stood up to a right-wing prime minister who was getting bad advice from AIPAC, and we won.