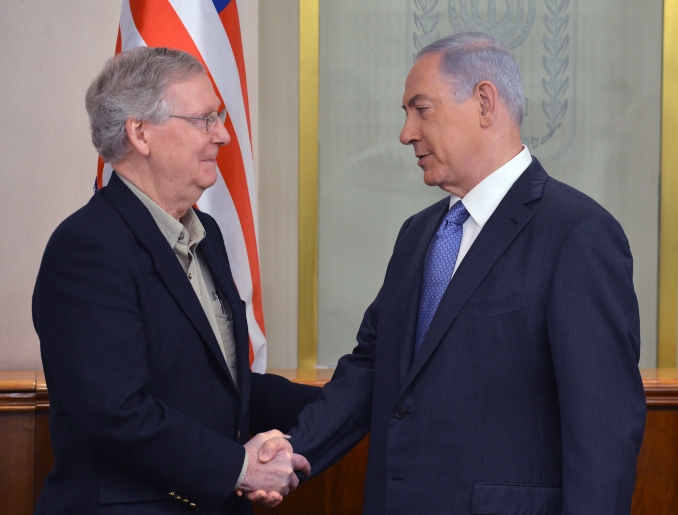 “We are very much concerned for our common interests by the developments in the Middle East,” Netanyahu told the senators, according to a statement issued by his office. “As we are speaking, Iran is rampaging through Yemen; it is conquering the Middle East. This is correctly seen by all the countries in the Middle East as a strategic move to dominate the region and therefore we are witnessing something quite unprecedented.

“And as Israel and the Arab countries see Iran progressing with its aggression to conquer Yemen and the Bab el-Mandeb straits, talks continue as usual and go on, on a deal that from everything that we hear paves Iran’s way to the bomb.”

Talks between Iran and world powers continued in Lausanne, Switzerland, on Sunday with a goal of meeting a March 31 deadline for a framework agreement on curbing Iran’s nuclear program. Following his meeting with the senators, Netanyahu told his Cabinet that a potential framework deal being reported over the weekend is worse than Israeli leaders have feared

“I want to assure all Israelis that the U.S.-Israel relationship is still, no matter what’s been said recently, in very, very strong shape on a bipartisan basis in the U.S. Congress,” McConnell told Netanyahu. “The group who are here share your concerns about this potential agreement, and there are options that the United States has in a wake of an agreement and if there is no agreement.”

McConnell said that if a preliminary agreement is inked this week, Senate Republicans will work to require that the agreement come to the Republican-controlled Congress for approval. If there is no agreement, he said, the senators will work to increase sanctions on Iran.