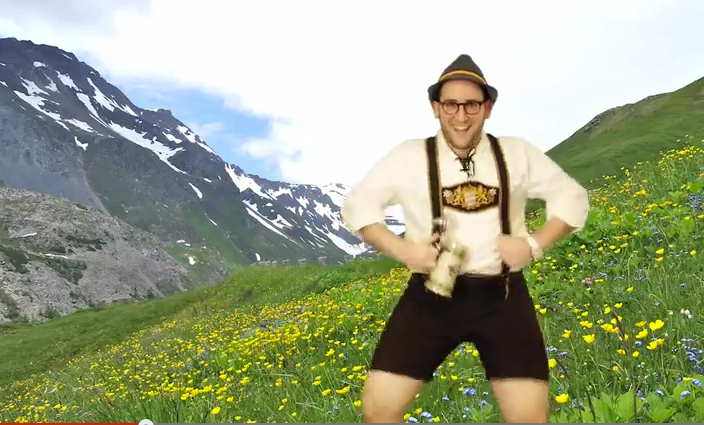 I never thought I would witness an Orthodox Jewish male a cappella group perform in lederhosen. After all, the traditional German outfit long has been associated with Nazis and their sympathizers.

But the Maccabeats (you were probably wondering whatever happened to them when they didn’t show up in our Passover parody video roundup last week) get their Bavarian beer hall on in their latest video. In this somewhat surreal YouTube offering, they perform a whopping eight different versions of “DayeBaBnu” (yes, if they had given us just two or three versions, it probably would have been enough).

In the lederhosen part, the vocalists best known for turning “Dynamite” into “Candlelight” on Hanukkah four years ago yodel it up in front of a “Sound of Music”-y Alpine backdrop. Other variations include hip-hop, heavy metal, barbershop and a style I couldn’t identify but that involved the guys dressing up in tropical vacation gear and lounging in beach chairs.

Can’t wait to see what costumes they’ll select for “Had Gadya.”