These guys just killed a lamb on video … for Passover 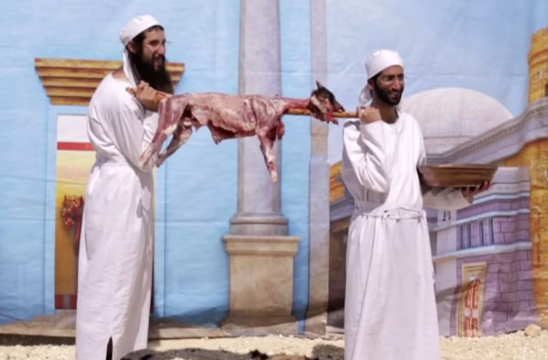 From the Temple Institute's video re-enacting the paschal offering.
Advertisement

This ain’t your mother’s Passover brisket.

Ever wonder what actually happened at the Holy Temple 2,000 years ago for Passover? What that sacrifice recounted in the Haggadah really looked like?

Wonder no more. The Temple Institute reenacted the entire process of the paschal offering, blood, bare lamb carcass and all. Then they put it on YouTube.

The video starts with an adorable lamb standing in a stable with children. In a few minutes, those very same children will help take the lamb to have its throat slit. But before that happens, priests in fully white garb blow trumpets and walk through the hills, carrying lambs and singing the festive Hallel prayer.

The priests inspect the lamb, as well as the butcher knife, before two of them hold the lamb to the ground as a third cuts its throat, emptying the blood into a pitcher. The pitcher gets passed from priest to priest until the final priest in the line dashes the blood against the wall.

They remove the lamb’s skin and innards, carry the bare carcass to an oven, stick it in and — voila! — we have a paschal offering.

The video ends with someone assembling a sandwich of matzah, lettuce and shwarma-like lamb from the sacrifice, which — I’ll be honest —looks pretty tasty.

But, the video emphasizes, this isn’t the real paschal offering. That can only happen once the Temple is rebuilt. This is just a run-through, so there won’t be any time wasted on practicing once the Temple is up and running. In the meantime, the Temple Institute sent the meat from the offering to needy families.

If you have the stomach for it, here’s the full video: