NPR’s ‘From the Top’ airs from the bimah 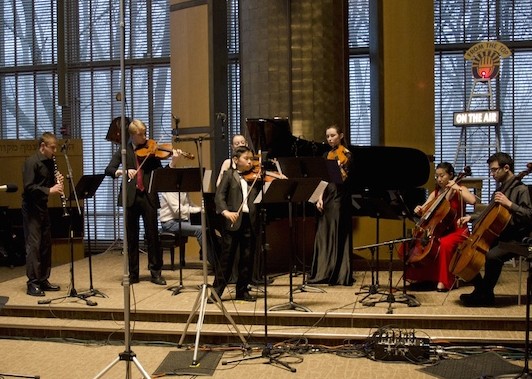 All the performers in the March 26 episode of "From the Top" on stage at Temple Beth Elohim in Wellesley, Mass., for a finale of Jeremiah Klarman's "Greser Vi Dos Leben," (Larger than Life). (Courtesy of "From the Top")
Advertisement

It’s not every day that a National Public Radio show broadcasts from a bimah.

But that’s what happened last week, when Temple Beth Elohim in Wellesley, Mass., hosted “From the Top With Host Christopher O’Riley,” a nationally distributed program showcasing the work of young classically trained musicians.

Recorded March 26 before a live audience, the Beth Elohim show marked the first time “From the Top” has dedicated an entire episode to Jewish music and music by Jewish composers.

The episode was the culmination of a partnership between “From the Top,” the suburban Boston Reform congregation and the Sixth Annual Boston Jewish Music Festival, which just completed a weeks-long lineup of programming that ranged from concerts pairing Jewish and Irish musicians to the American debut of Diwan Saz, a popular multiethnic Israeli group.

Highlights in the Beth Elohim show include 16-year-old tenor Samuel Dylan Rosner singing “Ashrei HaGafrur” (Blessed is the Match), a composition he wrote that was inspired by Hungarian poet and Holocaust victim Hannah Senesh.

In addition to performing the piece, Rosner, of Scarsdale, N.Y., spoke about the experience of visiting Senesh’s grave while he was touring Israel with HaZamir, the international Jewish high school choir.

“To be at her grave, the woman I admired so much, was so compelling,” nearly moving him to tears, he said, adding that he felt “I was part of a new face of Judaism, keeping the Jewish culture, religion and spirit alive.”

The performance also included “Greser Vi Dos Leben,” (Larger than Life), a commission of a new klezmer-inspired composition by fast-rising young Jewish composer, Jeremiah Klarman whose career has included performances of his work by the Boston Pops and New England Conservatory’s Festival Youth Orchestra. Now a student at the New England Conservatory, Klarman, 22, is a graduate of Gann Academy, a pluralistic Jewish high school in suburban Boston.

Also on the roster were “Three Preludes” by George Gershwin; “Five Pieces,” by Czech-born composer Erwin Schulhoff, who died in 1942 in a Nazi concentration camp; and “Scaramouche,” by Darius Milhaud

“From the Top” founder Gerry Slavet, who was one of Boston Jewish Music Festival’s first board members and a longtime member of Beth Elohim, told JTA he found it thrilling and very emotional to bring together the disparate parts of his life into one event.

Music has always been an important part of Beth Elohim life, Slavet said. The new sanctuary, built five years ago, was designed by William Rawn Associates the architectural firm behind the award-winning Seiji Ozawa Hall at the Tanglewood Music Center in the Berkshires, according to the synagogue’s cantor, Jodi Sufrin.

“One of our hopes was that we would be a center for cultural arts for the broader Jewish community,” Sufrin said.

Check local listings for public broadcast. The full concert can also be heard on the website, www.fromthetop.org.