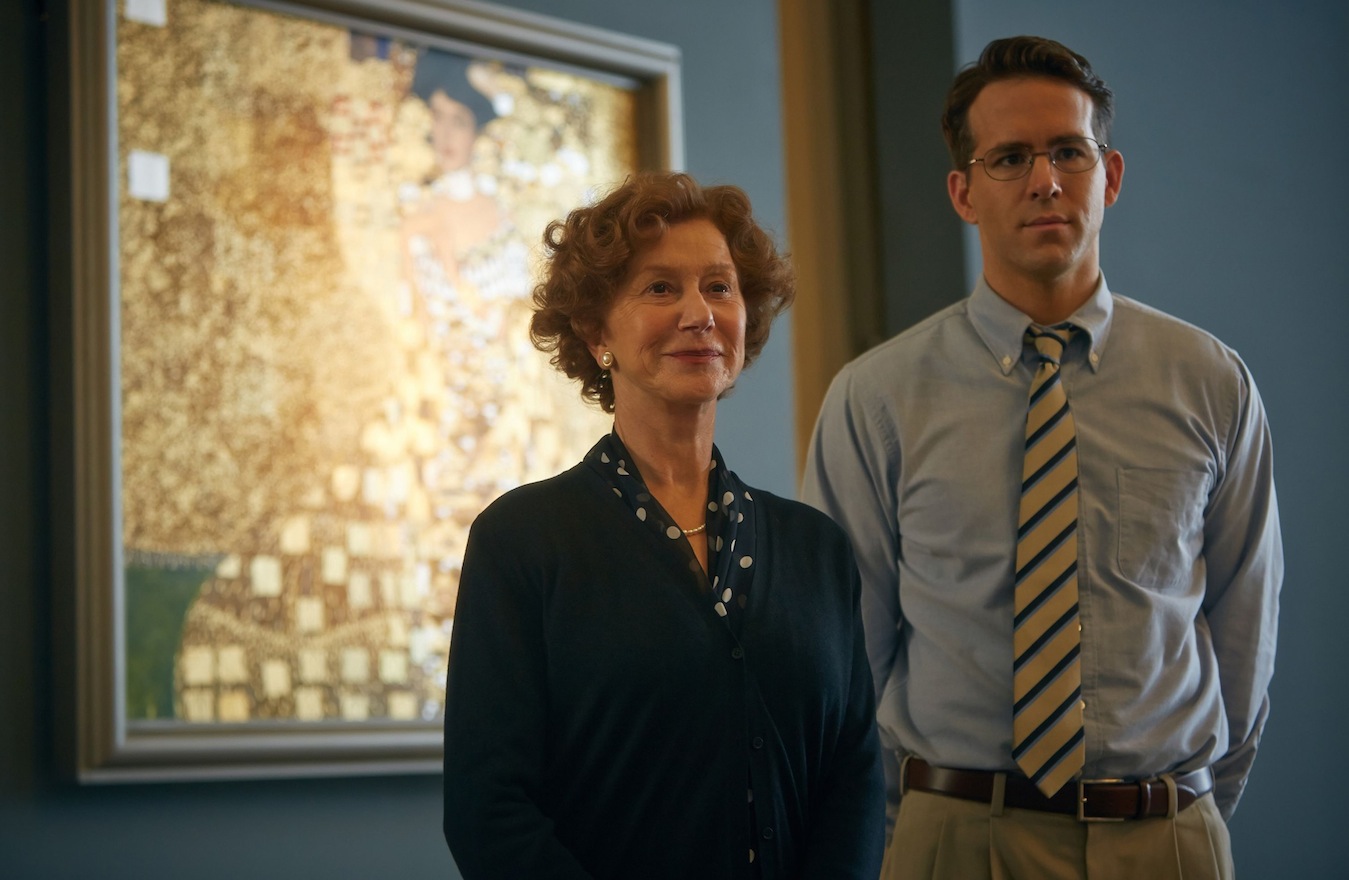 LOS ANGELES (JTA) — When attorney E. Randol (Randy) Schoenberg saw himself portrayed on the big screen by hunky Ryan Reynolds in the movie “Woman in Gold,” he immediately spotted a difference.

“Obviously, I’m not the sexiest man alive,” Schoenberg acknowledged in an interview at his West Los Angeles home, referring to People magazine’s designation of Reynolds in 2010. “I don’t look like Ryan, with a T-shirt on or a T-shirt off.”

Such differences aside, Schoenberg wasn’t bothered seeing his years of struggle and triumph portrayed by Reynolds in “Woman in Gold,” a new drama based on Schoenberg’s successful recovery of a world famous painting looted by the Nazis from its Jewish owners.

The movie focuses on the relationship between Maria Altmann, the elderly descendant of one of the wealthiest and most prominent Jewish families in Vienna, and a young, unproven lawyer who took on the Austrian and American governments to recover what was then the most expensive painting in the world.

“Woman in Gold” recreates an era when Vienna rivaled Paris as the cosmopolitan capital of the world, with Jewish talent, taste and wealth integral to its fame and lifestyle. Among the most prominent Jewish families of the time was the Bloch-Bauer family, headed by the sugar magnate Ferdinand Bloch-Bauer.

Bloch-Bauer’s wife, Adele, reigned over a glittering salon attended by Vienna’s leading artists and intellectuals. A frequent guest was Gustav Klimt, the most sought-after painter in Austria, as famous for for seducing the subjects of his portraits as for his innovative style.

Between 1903 and 1907, Klimt painted Adele in a gold-flecked portrait, “Portrait of Adele Bloch-Bauer I,” which to the Viennese embodied the glamor and beauty of their city and was dubbed the “Austrian Mona Lisa.”

The family’s privileged life came abruptly to an end in 1938, when Adolf Hitler annexed his native Austria to the Third Reich. The film shows Hitler’s motorcade entering Vienna, greeted by near-hysterical, swastika-waving citizens, while their Jewish neighbors were forced to scrub the sidewalks with toothbrushes. The Bloch-Bauer clan was stripped of its wealth and its private art collection, including the Adele portrait.

A year earlier, Adele Bloch-Bauer’s niece Maria had married Fritz Altmann, a handsome Polish-Jewish opera singer who was imprisoned at the Dachau concentration camp after the Nazi takeover. Maria and Fritz escaped the Nazis in a harrowing chase sequence shown in the movie, made it to America and settled in Los Angeles in 1942. They bought a middle-class home, and Maria opened a small dress shop. Her husband, his opera ambitions unfulfilled, died in 1994. Altmann died in 2011 at age 94.

After the war, Austria came under increasing international pressure to return or compensate its former Jewish citizens for their confiscated property. In 1998, the country’s parliament passed a restitution act, which included compensation for looted art.

Maria was informed of the new law and advised first to hire a first-class lawyer. But her first call was to Schoenberg, then a rising 32-year-old Los Angeles attorney.

The descendant of Viennese artistic royalty and the grandson of two eminent composers, Arnold Schoenberg and Erich Zeisl, Schoenberg had a position at a respected law firm, but he acceded to Maria’s request to work on a contingency basis. Under the arrangement, Schoenberg would receive no payment if he lost the case, as everyone predicted he would. If he won, he would be entitled to 40 percent of the value of the “Golden Adele” painting and five lesser Klimt works once owned by the Bloch-Bauers that were then hanging at the national Belvedere Museum in Vienna.

From the beginning, more experienced legal experts told the headstrong Schoenberg that there was no chance that he could successfully sue a foreign country in an American court. And even if by some miracle he cleared that hurdle, they cautioned, Austria would never give up its “Mona Lisa.”

Compressing nearly eight years of legal wrangling into a 108-minute movie was no easy task. Director Simon Curtis and screenwriter Alexi Kaye Campbell had to squeeze in Schoenberg’s often complex working relationship with Maria, as well as his personal concerns, as when his wife went into labor as he was on a flight to Washington to argue before the U.S. Supreme Court that he had the right to pursue a case against a foreign government in an American court.

Despite facing a battery of experienced lawyers representing both the Austrian and American governments, the justices ruled 6 to 3 in Maria Altmann’s favor. Austria did not recognize the American verdict and, in another major gamble, Schoenberg agreed to submit the dispute to an arbitration panel of three Austrian experts. Again, against all odds, the panel ruled in Altmann’s favor.

After a brief exhibition at the Los Angeles County Museum of Art, the painting was sold by Altmann for $135 million to Ronald Lauder, the billionaire art collector, who placed it in his New York art gallery, the Neue Galerie. Four other works by Klimt, a later portrait of Adele and three landscapes, were later auctioned off for nearly $193 million, bringing the total for Altmann and some close relatives to some $326 million.

Schoenberg declined to spell out his share of that sum, but media reports generally put the figure at about $139 million.

The film “Woman in Gold” is based largely on the book “The Lady in Gold” by former Los Angeles Times reporter Anne-Marie O’Connor, and draws much of its strength from the performance of Helen Mirren in the role of Maria Altmann.

Best known in this country for her royal movie roles as Queen Elizabeth I and II, Mirren exchanged her upper-class British accent in favor of a more Continental pronunciation and displays much of the spunk and sparkle of the woman she portrays.

Schoenberg, now 48, acknowledges that the “tons of money” coming his way have freed him from such common concerns as paying the mortgage or saving for the education of his three children.

“When you consider how much of our life is taken up by worrying about bills, all of this is a real liberation,” he said.

Given his own family background, it is not surprising that the fate of Europe’s Jews is part of his legacy. He has given $7 million to the Los Angeles Museum of the Holocaust in Pan Pacific Park, which also received a bequest from Maria Altmann. Schoenberg says that since the victory he has become a much more generous tipper, but in other ways he finds it hard to break old habits.

“I still can’t get myself to fly first class on a plane, although I could well afford it,” he said.

Most of his time is now taken up as president of the Holocaust museum and his duties teaching law at the University of California, Los Angeles. Asked how close the film version came to the actual happenings, Schoenberg said that while certain details had been fictionalized for dramatic effect, “the spirit and core of the movie is truthful.”

Even now, the struggle over Klimt’s paintings is not over. Just last month, the Austrian government refused to return Klimt’s 112-foot “Beethoven Frieze” to the heirs of a Jewish art dealer who claim the painting was sold under duress at a discount. The rejection reminded Schoenberg just how easily the decision in the “Woman in Gold” case could have gone the other way.

“Before I took on this lawsuit I talked it over with my wife and we both realized that our family could easily go down with this case,” he said. “If that had happened, there would have been no book, no movie and no big payoff. I would have just put my tail between my legs and looked for a new job.”