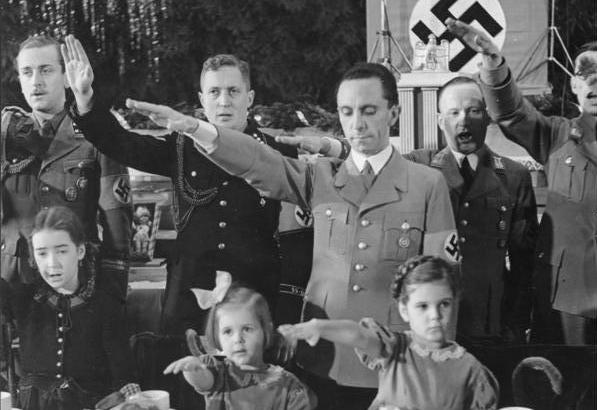 Joseph Goebbels with his daughters, Hilde (center) and Helga (right), at a Christmas celebration in Berlin, 1937. (German Federal Archives)
Advertisement

For the heirs of one of the 20th century’s most brilliant propagandists, the descendants of Hitler’s propaganda minister Joseph Goebbels, appear to be remarkably unconcerned about coming off as callous in the media.

Long accustomed to profiting from reprints of Goebbels’ 20 years worth of diary entries, the offsprings of his siblings (he and wife Magda poisoned their own six children shortly before taking their own lives as the Red Army advanced upon their Berlin bunker) are outraged that Random House is refusing to follow suit.

The descendants are demanding money from the publisher Random House for its use of excerpts from those diaries in a new English-language biography, Peter Longerich’s “Goebbels.” But Random House’s German division is refusing, saying that it would be “immoral” to pay for the words of the Nazi propagandist.

“This war criminal didn’t really commit acts by his hands, but by his words,” Rainer Dresen, a Random House lawyer has told the press. “These words prolonged the war … [and] should not bring any money… to [his] heirs.”

Dresen told The Daily Mail that Random House is the first publishing house to refuse to pay for the use of Goebbels’ diaries.

Dresen said he would have approved the payments if the Goebbels family agreed to donate them to a Holocaust-related charity, but the family — speaking through their representative Cordula Schact, who happens to be the daughter of Hjalmar Schacht, Hitler’s economics minister — reportedly refused.

Longerich, the Goebbels biographer, noted that the case is a “question not only of morality, but of professionalism for an historian.”

“If you accept that Schacht controls the rights to Goebbels’ diaries, then – theoretically – you give this person the right to control research,” he said.

Longerich’s biography came out in German in 2010, and an English-language edition of the book will be published next month.

The matter is to be decided in court on April 23.