In ‘A Nazi Legacy,’ a son’s love is tested by mass murder 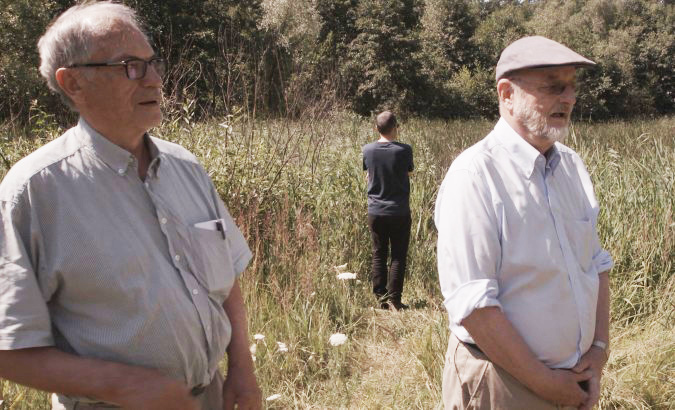 NEW YORK (JTA) — It’s hard not to get emotional watching the superbly rendered “A Nazi Legacy: What our Fathers Did.”

But unlike many Holocaust documentaries, the overwhelming feelings aren’t sadness and loss, though there are those, too. They are exasperation and anger.

In the film, which premiered this month at the Tribeca Film Festival here, British Jewish lawyer Philippe Sands tells the story of two men, both the children of high-ranking Nazi figures.

Niklas Frank is the son of Hans Frank, Hitler’s lawyer and the governor general of Nazi-occupied Poland. The elder Frank was hanged in 1946 after being found guilty at Nuremberg for complicity in the murder of Poland’s 3 million Jews.

Horst von Wachter is the son of Otto von Wachter, an Austrian who served as the Nazi governor of Galicia (now Lviv, Ukraine) and died in hiding in 1949 while under the Vatican’s protection.

Frank, an author and journalist, is well known in Germany due to his controversial 1987 best-seller, “The Father: A Settling of Accounts,” which detailed his revulsion toward the man who became known as the Butcher of Poland. In his wallet, Frank keeps a photograph of his father’s corpse taken right after he was hanged.

By contrast, Wachter holds his own father in high esteem, refusing to acknowledge his role in the mass murder of the Jews, even as Sands presents him with increasingly clear and disturbing evidence of it.

Sands, whose grandfather is from the area that fell under Wachter and Frank’s command, and who lost most of his family during the Holocaust, narrates the story of what happens when a son’s love for his father collides with the immutable facts of history.

Both Frank and Wachter — who knew each other as children and have remained friends — were born in 1939. Wachter describes an idyllic childhood shattered by Germany’s defeat in 1945. In his home, he shows Sands a family photo album that intersperses shots of family outings with photos of his father and his Nazi associates. There’s his father with Heinrich Himmler, the S.S. military commander. Under another photo, the scrawl reads “A.H.” — for Adolf Hitler.

“I was transported back 70 years to the heart of an appalling regime, but Horst was looking at these images with a different eye from mine,” Sands narrates. “I see a man who’s probably been responsible for the killing of tens of thousands of Jews and Poles. Horst looks at the same photographs and he sees a beloved father playing with the children and he’s thinking that was family life.”

By contrast, Frank’s memories of his parents are mostly bitter. The couple had a loveless marriage, and his father wanted a divorce. But Frank’s mother appealed to Hitler, who forbade the divorce until after the war. Hans Frank obliged.

“My father loved Hitler more than his family,” Frank says.

Frank recalls visiting the Krakow ghetto as a young boy with his mother, who went to “shop” for furs because she knew the Jews could not refuse whatever price she named. Frank is unsparing in his assessment of his father.

“My father really deserved to die at the gallows,” he says.

The film intersperses interviews with Frank and Wachter with film and photos from the war. Some of the archival material is astonishing, including footage of Hitler and other top Nazis. Sands goes with Frank to the cell at Nuremburg that held his father until the day of his execution. The three men visit the remains of the synagogue where Sands’ own family likely spent their last Shabbat before the synagogue was burned to the ground by Nazis under the command of Wachter’s father.

All along, Wachter cannot bring himself to acknowledge his father’s crimes, offering one excuse after another and relying on vague generalities to rebut evidence that he bore responsibility for the deaths of tens of thousands of Jews.

For us, the facts are irrefutable. Otto von Wachter established the Jewish ghetto in Lviv, then known as Lemberg. He ran the transportation that shipped Jews off to concentration camps. He passed up Himmler’s offer to return to his native Vienna, choosing to stay put and see his job through.

For Wachter, none of it is enough to change his fundamental belief that his father was a good man who played but a bit part in the Nazi regime.

“He was absolutely somebody who wanted to do something good,” Wachter says. “His fault was that he believed Hitler would change his politics.”

Several pivotal scenes anchor the film, each intensifying the effort to get Wachter to come to terms with his father’s crimes. In one, a panel discussion with Sands, Frank and Wachter, the audience turns on Wachter for his unapologetic admiration of his father. Wachter squirms in his seat but holds firm.

In another, the three men visit the hall in Lviv where in 1942 Frank’s father announced the implementation of the Final Solution, crediting Wachter’s father for his work. Within a month of that speech, 75,000 local Jews were killed.

In the third, the three men visit the killing field in Galicia where some 3,500 Jews were shot by the Nazis and Sands’ own family members met their fate. Wachter wanders around, maddeningly resisting all efforts to admit his father’s culpability in the mass murder.

“There must be tens of thousands of Austrians lying [dead] around here, too,” Wachter argues. “I see this as a battlefield, you see.”

The film has its flaws. We’re told practically nothing about Frank and Wachter apart from the war, including what they do for a living or anything about their spouses or children. But these shortcomings aren’t central to the narrative.

Near the end of the film, the three men attend a memorial ceremony for Ukrainian nationalists who fought the Soviets during World War II. They talk with a middle-aged man who wears a swastika around his neck and tells them how proud he is of his division’s wartime legacy.

Then they run into an elderly World War II veteran. When the man is told who Wachter’s father was, he shakes Wachter’s hand enthusiastically, telling him his father was a decent man.

Wachter, pained for so much of the film, finally seems at ease. He smiles.