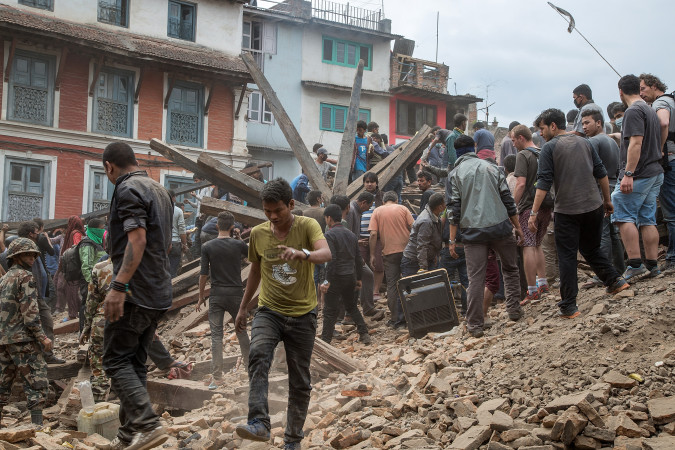 JERUSALEM (JTA) — The death toll from the earthquake in Nepal rose to more than 3,300 two days after it struck, as planes carrying rescue workers and aid were delayed due to natural conditions.

One Israeli plane carrying 90 Israeli rescue workers and supplies left Monday morning for Kathmandu after a 12-hour delay, while a second carrying an Israel Defense Forces field hospital and a staff of more than 200 remained poised to take off once a safe runway is confirmed at its destination. The plane was set to leave Israel on Monday evening.

Two Jewish-American men — longtime friends who were planning to hike part of Mount Everest — have not been heard from since the 7.8 magnitude temblor on Saturday morning, the New York Daily News reported.

Danny Cole, 39, a father of four from Crown Heights, New York, and Mendy Losh, 38, originally from Crown Heights and now living in Los Angeles, likely were on a trail that leads to the Everest base camp when the earthquake struck, triggering avalanches in the area, according to the newspaper.

About 100 Israelis remained out of contact in Nepal on Monday morning, down from 150 the day before, according to the Israeli Foreign Ministry.

Three Israeli families with babies born to Nepalese surrogate mothers returned to Israel late Sunday night. There reportedly are 23 more such babies, several born prematurely, who are expected to arrive in the next few days following the relaxing of bureaucratic procedures in light of the emergency situation. Four Nepalese surrogate mothers pregnant with Israeli families’ babies may also come to Israel, the Times of Israel reported.