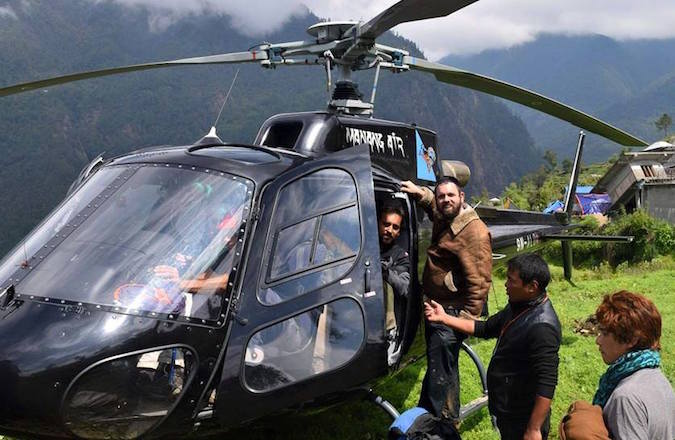 (JTA) — The co-director of the Kathmandu Chabad house director borrowed a Nepali helicopter to bring food and water to hikers stranded in the aftermath of the earthquake.

Rabbi Chezky Lifshitz rode with the helicopter to the mountainous region of Dhunche on Wednesday, according to Chabad. Twenty-five Israeli hikers were later airlifted from the area and will be sheltered in the Chabad house.

The rescue came after a mission to deliver food and a satellite phone to the hikers by motorcycle failed due to blocked roads.

Lifshitz had been communicating with many of the Israelis stuck in the mountain regions in remote areas like Dhunche and Syrabrubesi, Chabad reported. He used satellite phones fixed with GPS that the hikers are carrying, then relayed their locations to the Nepalese government.

His wife, Chani, with the assistance of Israelis stranded at the Chabad house, prepared and distributed hundreds of bowls of dal bhat, a lentils-and-rice local food staple, to people in their neighborhood, whose own supplies of food have practically run out. She also prepared another 2,000 meals to be distributed further afield.

CORRECTION: This story said originally that the Chabad rabbi had piloted the borrowed plane.