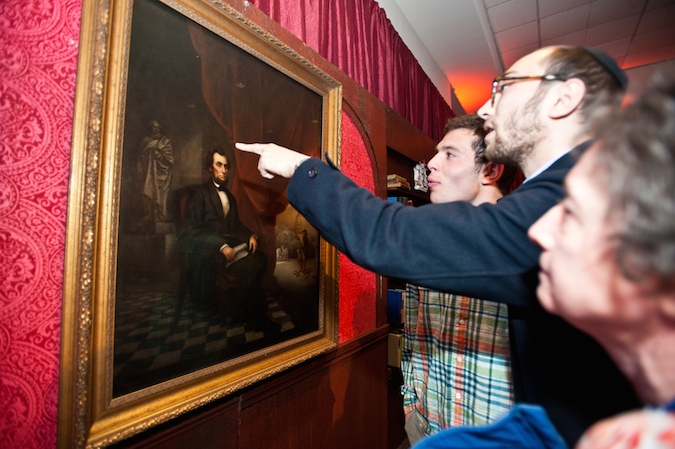 Most days, a little-known 19th-century portrait of Abraham Lincoln by Solomon Nunes Carvalho (1815-1895) is tucked away in archival storage at Brandeis University’s Rose Art Museum.

But on Tuesday, the deeply allegorical portrait, painted in 1865 by the American-Jewish artist, made a rare public appearance, the first in a decade. The painting is the only known portrait of Lincoln by a Jewish contemporary.

The occasion was a home-turf book launch for Brandeis professor Jonathan Sarna’s “Lincoln and the Jews,” co written with Benjamin Shapell, a collector of rare manuscripts and historical documents and the founder of the Shapell Manuscript Foundation.

The rich allegorical painting, which is reproduced in Sarna and Shapell’s book, reveals the cultural milieu of Carvalho, an observant Jew of Spanish-Portuguese descent. Born in Charleston, South Carolina in 1815, Carvalho was part of a highly cultured and esteemed family, Sarna said.

The 44-by-34-inch oil painting captures a deeply somber Lincoln, seated, gazing away from viewers. In his right hand, he clutches a scroll with the words from his famous second inaugural address, “with malice toward none, with charity for all.” To his left, a statue of George Washington looks over his shoulder. To his right, beyond the folds of a deep burgundy drape, is the ancient Greek Cynic philosopher Diogenes, who has suddenly dropped his lamp in amazement, a reference to his endless search for an honest man. In the far distance, the dome of the Capitol is bathed in golden light, suggesting an allusion to national unity. 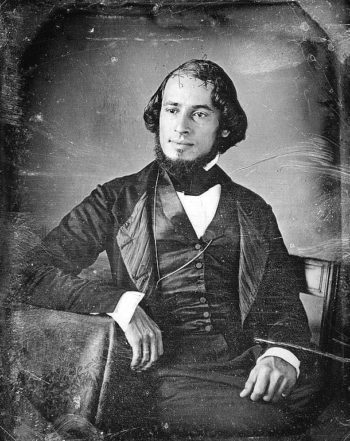 The dramatic portrait anticipates many themes now taken for granted, Sarna noted: The pairing in national stature of the first president and Lincoln, and the exaltation of Lincoln’s second inaugural address, something that was not clear in March 1865, when he delivered it.

There’s some debate about whether the painting was completed before or after Lincoln’s assassination. If it was completed post-assassination, it echoes an earlier work Carvahlo did of his childhood synagogue Beth Elohim, which he painted in extraordinary detail from memory after it burned during Charleston’s great fire of 1838, Sarna said.

Carvahlo, who in 1865, was living with his wife Sarah and their four children in New York City and working as a portrait artist and photographer, had an unusual career. In 1853, he joined explorer John Fremont on his search for a western railroad route to the Pacific Ocean, the first Jew appointed as an official photographer for an exploration of the American West, according to Arlene Hirschfelder, author of “Photo Odyssey: Solomon Carvahlo’s Remarkable Western Adventure.”

While his collection of daguerreotypes from the expedition have been lost, the Lincoln portrait, initially in private hands, was eventually acquired by Justin Turner, of Los Angeles, who with others donated the painting to Brandeis in 1958.

The painting was on display for years at the American Jewish Historical Society, when the organization was housed on the Brandeis campus. Since AJHS’ relocation (it is currently in New York City), the painting has been in storage. Sarna thanked outgoing Brandeis President Frederick Lawrence for arranging for the painting’s display.

“It’s wonderful to bring it back for this anniversary,” he said, referring to the 150th anniversary of Lincoln’s assassination. The painting, he said, is an important example of how Jews “participated in the history of the time.”