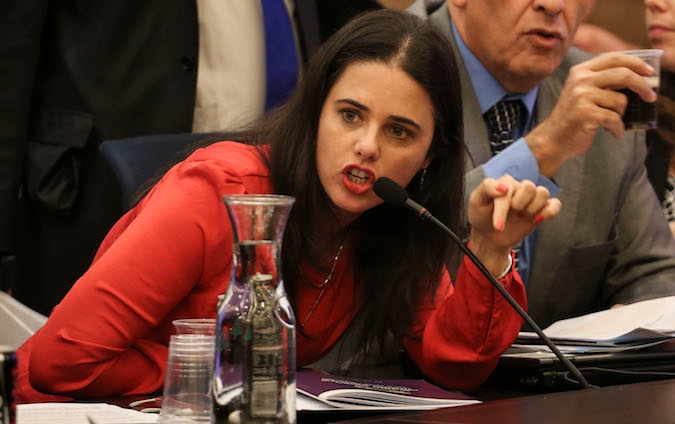 Ayelet Shaked (pronounced ShahKED), Israel’s newly appointed justice minister and a member of the right-wing Jewish Home party, has quickly risen to prominence having served just two years in the Knesset. Here’s what you need to know about the 39-year-old (today’s her birthday) political celebrity.

She’s seen as a poster child for Jewish Home’s efforts to reach beyond its Orthodox base.

A secular Jew from north Tel Aviv, Shaked is often described as a symbol of the Jewish Home and larger settler movement’s effort to appeal to a wider group of voters, and to overcome stereotypes of settlers and their supporters as being religious, gun-toting fanatics. Although she herself travels on Shabbat, she supports Orthodox bans on public transportation during the Sabbath. However, she also played a key role in passing a law (one that now is expected to be reversed as a result of the haredi Orthodox party United Torah Judaism joining Prime Minister Benjamin Netanyahu’s coalition) ending military service exemptions for haredi Jews.

Before entering politics, she worked as a software engineer for Texas Instruments.

Shaked served as an instructor in the Israel Defense Forces’ Golani Brigade, where she first became interested in right-wing politics. After earning a degree in electrical engineering and computer science at Tel Aviv University, she began working for Texas Instruments. Before running for Knesset with Jewish Home, she worked as Netanyahu’s office director for two years, leaving together with Naftali Bennett, in 2008, reportedly because of conflicts with Netanyahu’s wife, Sara.

Her Knesset record includes efforts to curb the High Court of Justice’s power.

As a Knesset member, Shaked has pushed for passage of an amendment that would limit the High Court of Justice’s power, and has been an advocate for deporting African migrants, defending the government policy of detaining them in a Negev facility. She also supported the controversial “Jewish state” law, which would enshrine Israel’s status as a Jewish state into law. (Critics of the law said it undermined Israel’s democracy.)

She’s a fierce critic of Israel’s left and its media.

In an Op-Ed she published in Haaretz (responding to one about her headlined “A Knesset member whose irresponsible violence belies her appearance”) she described Israel’s political left as “delusional” and having “lost every vestige of self-control.”

She’s married to a fighter pilot and has two young children.

Shaked grew up in north Tel Aviv, the daughter of a politically left-wing Ashkenazi mother and a Likud-voting Iraqi father, but has said politics was rarely discussed at home. However, she has said that she’s been right wing since she was a child and watched a televised debate between Yitzhak Shamir and Shimon Peres, and her politics solidified during her military service, when she became friendly with many religious nationalists. She still lives in the same neighborhood of Tel Aviv where she grew up, with her fighter pilot husband and two young children.

She posted a controversial article on Facebook last summer, drawing a flurry of attention and criticism.

The day the bodies of three kidnapped Israeli teens were found (and the day before Jewish Israelis murdered Palestinian teen Mohammed Abu Khdeir in a revenge attack), Shaked posted an article by Uri Elitzur that called Palestinian children “little snakes” and argued that it was justified to bomb civilians when they give shelter to “evil.”

She was named the best-looking female in the Knesset.

In a recent poll conducted by the Israeli Society of Plastic and Aesthetic Surgery, Shaked beat out former fashion model Orly Levy-Abekasis of Yisrael Beitenu, another right-wing party. (Yesh Atid’s Yair Lapid was named the best-looking man in the Knesset.)