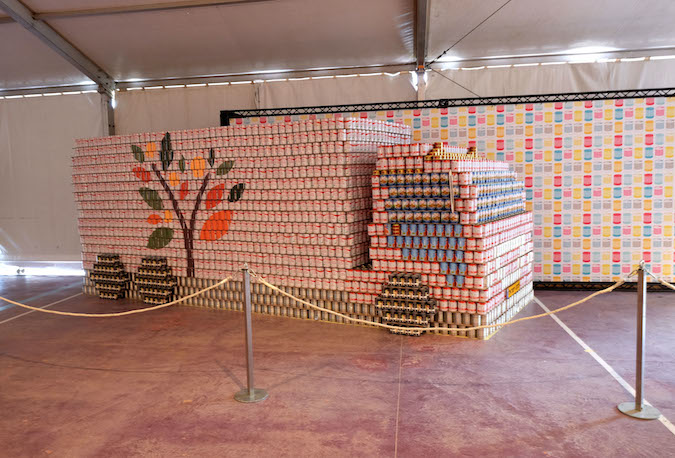 From the wrong angle, it looks like a bunch of unevenly stacked tuna cans, as if someone in the grocery store did a bad job.

Look at it from the other direction, and its shape becomes clear: The cans are, in fact, a sculpture of a giant open hand holding a bag of clementines.

That’s the idea behind “Come and See What Cans Can Be,” an exhibit of seven installation artworks constructed almost entirely from canned food. On display the atrium of Ra’anana Park, in a Tel Aviv suburb, it’s organized by Leket Israel, which salvages hot meals from caterers and unused crops from Israeli farmers, and donates them to NGOs that feed the hungry.

Along with the hand, the installations depict a Leket truck used to transport food, a silverware set, an Israeli olive tree in a field, a giant sculpture of a food can (itself, of course, made from food cans) and a giant watermelon slice. The pieces are made solely of the cans and cardboard sheets that stabilize them.

One more installation is a sculpture of a refrigerator, its shelves holding just the kind of produce that Leket redistributes — vegetables too ugly to be sold at market, but which are still just as edible. A screen showing more misshapen produce is embedded in the piece, displaying a potato shaped like a heart or a cucumber that looks especially like … something else.

“Everyone understands cans,” said Leket founder Joseph Gitler, who added that the exhibit’s goal is to raise awareness of food waste. “It’s a basic necessity, it’s cheaper often than fresh produce. We wanted something where we could bring in creative people.”

The exhibit is done in conjunction with Canstruction, a global charity that creates installation art pieces out of food cans all over the world, then donates the cans to charity — as Leket will also do. Canstruction exhibits have been shown in 150 cities worldwide and have donated 25 million pounds of food since its founding in 1992.

The Leket exhibit, in total, includes some 70,000 cans — ranging from tuna to tomato paste to white beans. The largest piece, the truck, has 13,500 cans alone. Under the direction of a curator and two designers, 100 Leket volunteers set up the exhibit from Sunday to Tuesday, when it opened.

Leket hopes to draw 10,000 visitors, including groups of schoolchildren, by time the exhibit closes Saturday night. It invited visitors to bring a can of their own to donate as they arrived.

Some of the installations — like the fridge with the awkward produce — are there to prove a point. Others aim to evoke Israeli nostalgia, according to exhibit curator Hadas Avtalion-Jackont. Israelis, she said, will feel drawn to the installation depicting an olive tree, or the giant can with a picture of a farmer — the logo of Tal Tomatoes — that lines so many supermarket aisles.

“It’s an Israeli character from the kibbutz, the kibbutz farmer with a crate of tomatoes,” she said. “We’re not getting into marketing, but we wanted to get a recognizable Israeli icon.”