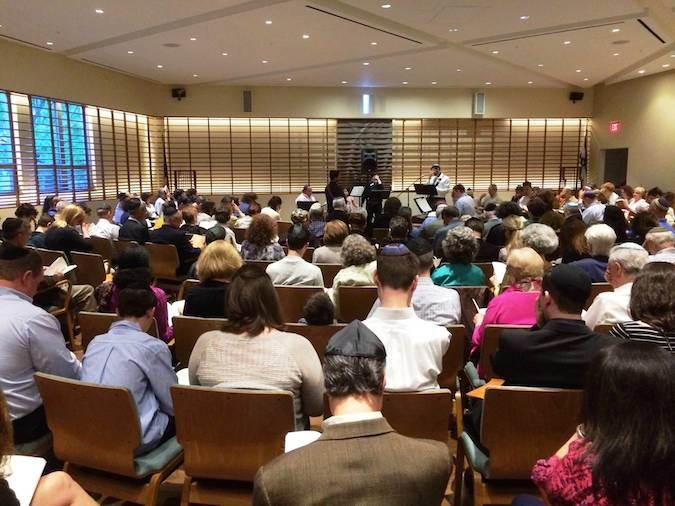 Some 90 percent of Jews are white, according to a new study by the Pew Research Center. (David Polonsky)
Advertisement

NEW YORK (JTA) – The Pew Research Center’s newly released 2014 U.S. Religious Landscape Study offers a trove of data on American Jews based on interviews with 35,071 American adults, 847 of whom identified their faith as Jewish. Here are some of the more interesting findings about the Jews.

We’re highly educated! There are more American Jews with two or more university degrees than those who have just one – 31 percent have a graduate degree and 29 percent have just a bachelor’s degree. With a college graduation rate of about 59 percent (more than twice the national average of 27 percent), American Jews are the second most-educated religious group in America after Hindus, at 77 percent.

We’re the biggest religious minority! Judaism is the largest faith group in America after Christianity, and its relative size in America has grown slightly since 2007 – from 1.7 percent of the U.S. population in 2007 to 1.9 percent in 2014. The denominational breakdown of Jews who identify with the Jewish faith (“Jews by religion”) is 44 percent Reform, 22 percent Conservative, 14 percent Orthodox, 5 percent another movement and 16 percent no denomination.

We’re not as white as we used to be: American Jewish adults are 90 percent white, 2 percent black, 4 percent Latino, 2 percent Asian-American and 2 percent “other non-Hispanic.” That’s a notable change from 2007, when whites comprised 95 percent of American Jews, Latinos comprised 3 percent, blacks comprised 1 percent and the percentage of Asians was negligible.

A quarter of us are losing our religion: When it comes to religious retention rates, American Jews come in third, retaining 75 percent of those raised Jewish. By comparison, Hindus retain 80 percent and Muslims 77 percent. Behind the Jews are Evangelical Christians at 65 percent; Mormons, 64 percent; Catholics, 59 percent; and mainline Protestants, 45 percent. Jehovah’s Witnesses retain only 34 percent.

Nu, when are we going to get married already? The percentage of Jewish adult singles is growing – up from 19 percent in 2007 to 23 percent in 2014. Fifty-six percent of Jewish adults are married, and another 6 percent are living with a partner. Fifteen percent were married but are now separated, divorced or widowed. The Jewish fertility rate is 2.0 children, compared to 2.1 children for all Americans.

(The Jewish data in the survey has a margin of error of 4.2 percentage points.)