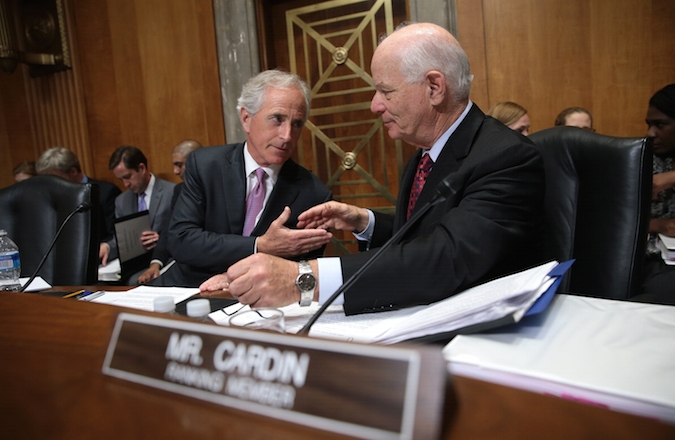 WASHINGTON (JTA) – The Iran deal may not be done, but bids by its opponents to shape it are all but buried.

Skeptics of the nuclear negotiations have all but given up on a congressional role before the June 30 deadline for an agreement between Iran and the major powers.

“I’m not sure there’s anything anyone can do now to ensure a better deal,” Mark Dubowitz, the director of the Foundation for Defense of Democracies, a think tank consulting with Congress and the administration on Iran, said in an interview.

Attempts to limit sanctions relief on Iran, to roll back further its uranium enrichment program, and to link the deal to changes in Iranian relations with Syrian and Yemeni leaders – all goals sought by skeptics – are off the table, at least for now.

Last week, the Senate in a 98-1 vote approved a bill mandating congressional review of any deal. The U.S. House of Representatives approved the bill 400-25 on Thursday, and President Barack Obama has said he will sign it.

In order to secure the necessary bipartisan support, Sen. Bob Corker, R-Tenn., the chairman of the Senate Foreign Relations Committee, worked with Sen. Ben Cardin, D-Md., to strip out what the Obama administration had deemed “poison pills”: provisions that would determine what a deal looked like, for instance requiring Iran to give up its backing for terrorism. Instead, the bill simply gives Congress an up or down vote on the deal. Even if the Congress disapproves, Obama has veto power.

The American Israel Public Affairs Committee, the pro-Israel powerhouse that for two decades has led efforts to isolate Iran, signed off on the formula.

“Our priority is to make sure the bill gets passed with the strongest bipartisan majority as soon as possible so that Congress is guaranteed the opportunity to pass judgment on the final agreement,” an AIPAC source said.

“We view the greatest challenge to the security of the Middle East, of Israel and of the world Iran’s quest for empire coupled with its quest for nuclear weapons,” Netanyahu said Tuesday after meeting Ursula von der Leyen, the German defense minister. Germany and the United States, along with Russia, France, Britain and China, are negotiating the deal with Iran.

“We hope that this can be prevented, preferably by diplomatic means,” Netanyahu said. “We think a better deal is required than the one that is proposed in Lausanne [the city in Switzerland where the talks were being held], and I believe that this is important for our common future and our common security.”

How Netanyahu plans to go about shaping a better deal is unclear. He thought his best bet was speaking to Congress, and risked a rupture with the Obama administration when he accepted an invitation to address the body in March without consulting with the White House.

That avenue is now closed, according to opponents of the deal. Congress, under the Corker-Cardin bill approved last week in the Senate and Thursday in the House, may disapprove of the deal, but is not likely to garner the two-thirds majority in both chambers to override a presidential veto of its disapproval.

In the House, 151 Democrats signed a letter to Obama last week supporting diplomacy with Iran. The letter did not directly address the Iran deal, but leading the signatories was Rep. Nancy Pelosi, D-Calif., the minority leader. Leaders rarely sign letters, and her signature was a signal that Pelosi had more than the 149 votes required to avoid a veto override.

Dylan Williams, the vice president of government affairs for J Street, the liberal Jewish Middle east policy group that helped circulate the letter, said Democrats – and probably a handful of Republicans – would not want to kill a deal that comported with the terms governing the talks now underway, including an invasive inspections regime, an enrichment rollback and staggered sanctions relief.

“Sufficient numbers of Democrats will understand it’s a choice between the agreement and a complete breakdown in diplomacy and international sanctions,” Williams said.

Once a deal was in place – as early as next fall, given that Congress has up to 52 days to review a deal after the June 30 deadline – the avenue to register opposition would be the law’s requirement that the president certify to Congress Iranian compliance with the deal every 90 days.

Without existing sanctions in place, it would be difficult for Congress to reverse a bad deal, even should it find Iran is not compliant, Foundation for Defense of Democracies’ Dubowitz said, noting the difficulties of corralling businesses and other countries into reimposing sanctions.

“The administration is putting the United States on a trajectory where it will be very difficult for a future president or Congress to fundamentally change the terms of this deal,” Dubowitz said.

“It will be very difficult if not impossible to reconstitute the sanctions regime and then there will be only be two options” should Iran breakout to a nuclear weapon. “One is to concede an Iranian nuke, two is to use force to forestall that possibility.”

(Melissa Apter of the Washington Jewish Week contributed to this report.)