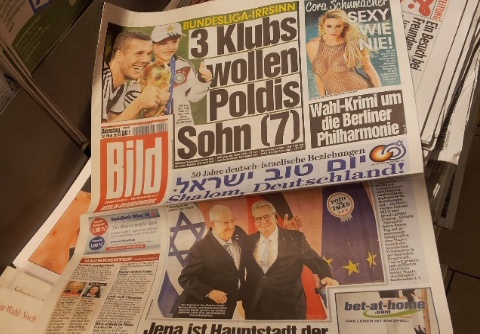 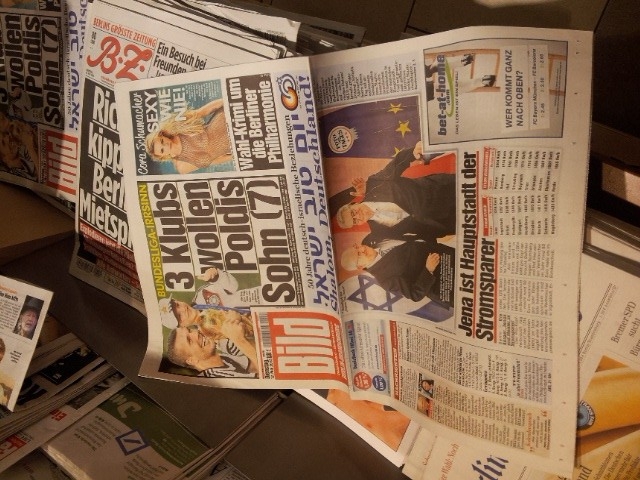 Germany’s most read newspaper, Bild, featured a message in Hebrew and a photo of the German and Israeli presidents on its front page Tuesday. (Toby Axelrod)

As a controversy last fall over a Facebook page encouraging more Israelis to move to Berlin made clear, the German capital has a large expat Israeli community.

But that wasn’t why Germany’s most widely read newspaper featured Hebrew on its front page this week. The Bild newspaper Tuesday included a bold headline in Hebrew – “Good Day, Israel!” — as part of a special issue marking 50 years of diplomatic relations with the Jewish state and Israeli President Reuven Rivlin’s state visit.

A cuddly photo of Rivlin and his German counterpart, Joachim Gauck, appeared below the fold. Above the fold was the paper’s usual sexy lady.

In fact, the two presidents seemed more than chummy after days of private and public meetings, though the “agreed to disagree” on some key political points, Rivlin said.

“You brought with you your heart, and that is a wonderful gift: Toda raba,” Gauck said in his remarks at a gala Tuesday night at the Berlin Philharmonic. “It was from my heart to your heart,” was Rivlin’s reply.

The Bild newspaper, which is consistently pro-Israel, is considered a must-read by mainstream politicians who want to stay in touch with the average citizen. It teamed up with Israel’s popular daily Yedioth Achronoth Tuesday, with both papers featuring extra content, including interviews with both presidents.