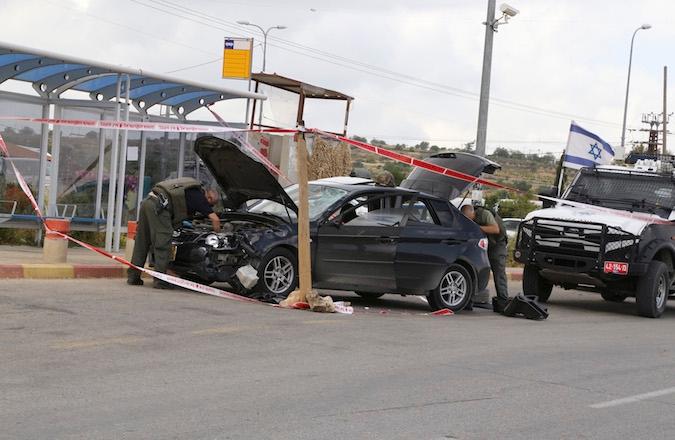 Israeli security inspect the vehicle of a Palestinian attacker who drove over Israelis near Alon Shvut, Gush Etzion, on May 14, 2015. (Gershon Elinson/Flash90)
Advertisement

JERUSALEM (JTA) — A Palestinian from Hebron confessed to intentionally ramming his car into a group of people at a West Bank bus stop on Thursday, Israel’s Shin Bet security service said.

Four Israelis were wounded, one seriously, in the incident, which took place near the Alon Shvut settlement in the Gush Etzion bloc of the West Bank. The Shin Bet identified the driver as Muhammed Arfaaya, 22, of Hebron, and confirmed that the attack was terrorist in nature. The vehicle Arfaaya was driving was a stolen vehicle with Israeli license plates. According to the Shin Bet, Arfaaya was released from prison a year ago after being jailed for throwing stones and carrying a weapon.

The four victims range in age from 16 to 25. Two are reported to be high school students and one a student at Yeshivat Har Etzion in Alon Shvut, Ynet reported.

The attack occurred near the junction where last November an Israeli woman, Dalia Lemkus, was stabbed to death and a Palestinian man drove his vehicle into three soldiers waiting for rides. Other vehicular and stabbing attacks have occurred in the area. It also is the same junction where last June three Israeli teens were abducted and later murdered.

There have been a series of vehicular attacks on Israelis by Palestinian drivers in the Jerusalem area in recent months.