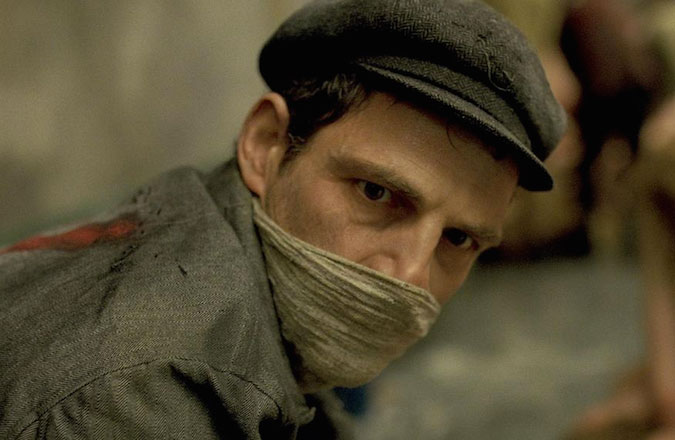 Given the long and storied history of the Holocaust film genre, it’s unusual for a new movie on the subject to be lauded as innovative.

But the new film “Son of Saul,” the first by Hungarian director Laszlo Nemes, is being called just that. It’s also become the most widely talked about film of the prestigious Cannes Film Festival.

“Son of Saul” stars 48-year-old and first-time actor Géza Röhrig as a member of the Sonderkommando, or the Jewish prisoners who were forced to help the Nazis run their concentration camps. The film is shot in a gritty, cinema verité style that makes the viewer feel like he or she is right there, in the middle of the death camps.

Vulture called it “a Holocaust film like none you’ve ever seen before.” The Los Angeles Times said that the film “turn[s] the form on its head.” The Guardian wrote: “It’s so frank and unflinching, it makes even the finest of previous Holocaust films look crass.”

This is historic praise for a rookie filmmaker, and it could land the film the Camera d’Or prize for best first film or even the Palme d’Or for best film. Perhaps the fact that the Jewish Coen brothers are the presidents of the festival’s prize jury will help the film’s chances.

There is no official release date yet, but Sony Pictures Classics bought the film’s U.S. distribution rights, so it will be coming to the States at some point.

“Son of Saul” aside, Cannes 2015 has to be one of the most Jewish editions of the festival in recent memory. Other films of Jewish interest there include Natalie Portman’s adaptation of Israeli novelist Amos Oz’s memoir “A Tale of Love and Darkness”; Woody Allen’s latest production, “Irrational Man,” starring Joaquin Phoenix and Emma Stone; “Amy,” the documentary on the late Jewish singer Amy Winehouse, which has impressed critics but angered her family; and the Israeli entry “Afterthought.” In addition, the film “Degradé,” notably directed by twins Tarzan and Arab Nasser from Gaza, involves the plight of several women in a Gaza beauty salon who display more anger toward what they call the “thugs” of Hamas than they do for Israel.

All in all, the Coen brothers certainly have a lot of Jewish-interest options to choose from.