Obama: I criticize Israel because I care about Israel 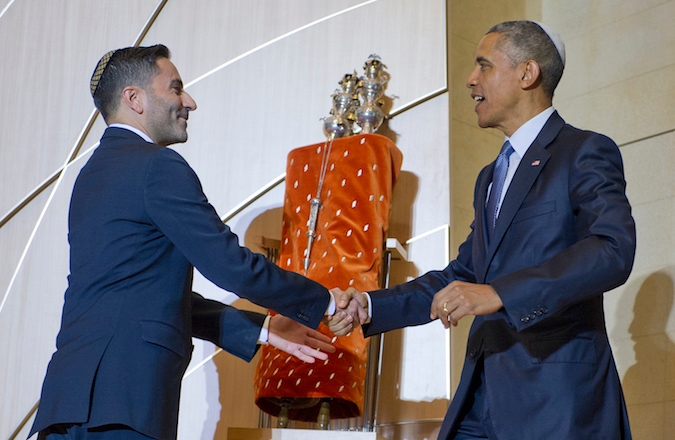 Obama and his officials are making clear they will not back down from making public criticism of Israel when they feel it is warranted. He made a similar pledge this week to The Atlantic journalist Jeffrey Goldberg, who is an Adas congregant.

Tensions between Obama and Israeli Prime Minister Benjamin Netanyahu intensified in March, when Netanyahu spoke to Congress and slammed Obama’s Iran policies in a speech that was organized with the congressional Republican leadership and without consultation with the White House.

Netanyahu’s comments ahead of Israeli elections the same month, urging followers to vote because “hordes of Arab voters” were being bused to polls, and appearing to back away from a two-state solution made matters worse, although Netanyahu after his reelection walked back both statements.

The White House invited Ron Dermer, the Israeli ambassador who helped organize the speech to Congress, to attend, but Dermer declined, saying he was out of town at a scheduled event.

Obama reiterated his commitment to Israel and said he was committed to combating what he called the “scourge” of anti-Semitism and its resurgence in Europe. “When we allow anti-Semitism to take root, our souls are destroyed.”

His speech, marking Jewish American Heritage Month, drew a mixed response, with some in the packed sanctuary applauding loudly when he reserved the right to criticize Israel when necessary and others staying silent.

“When I hear some people say that disagreements over policy belie a general lack of support for Israel I must object,” was a line that drew extended applause and loud cheers – but not from all members of the audience.