How the FIFA corruption scandal could affect Israel 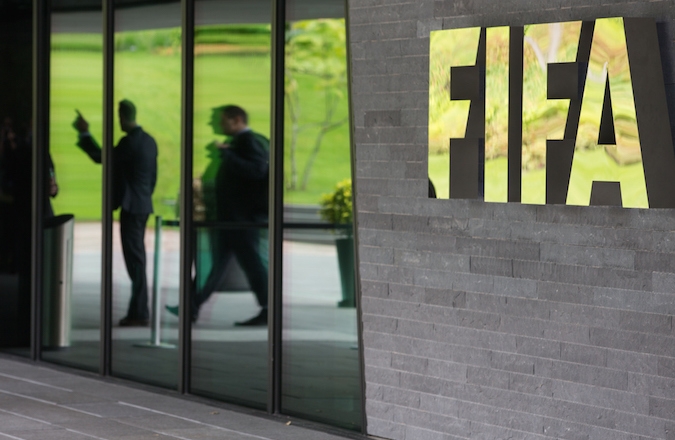 The FIFA headquarters in Zurich, Switzerland after Swiss police on Wednesday raided a Zurich hotel to detain top FIFA football officials as part of a US investigation into corruption. (Philipp Schmidli/Getty Images)
Advertisement

Israelis were expecting some big news to come out of the annual FIFA Congress this week.

But they probably weren’t expecting this.

In a bombshell operation, a Swiss law enforcement team showed up at the Zurich hotel hosting the annual gathering of the international soccer organization — and arrested nine senior officials.

The arrests come after decades of corruption allegations aimed at FIFA. (If you’re unfamiliar, comedian John Oliver’s got you covered.) The arrested officials face charges of taking money in exchange for World Cup hosting bids, as well taking bribes in exchange for media and marketing rights for major international tournaments.

The allegations are damning, but frankly, they couldn’t have come at a better time for Israel. Until Wednesday, much of the coverage of the FIFA Congress surrounded whether delegates would vote to suspend Israel from world soccer. The Palestinian Football Association is introducing the motion to suspend Israel, accusing it of unjustly restricting Palestinian soccer players’ freedom of movement and claiming that Israel’s West Bank settlement teams violate FIFA rules. Israeli officials have called the effort blatantly political and said that the Palestinians’ complaints all concern Israel’s security forces — not Israel’s soccer teams.

For Israel to be suspended, three quarters of delegates would need to approve the motion. If that were a long shot before, it’s even more unlikely now.

Suspending the Jewish state from international play would have rocked world soccer’s boat, inviting allegations of anti-Semitism and double standards. Israel, to say the least, likely would not have gone quietly into the night.

Now, with FIFA’s boat already rocking, member states will probably be loath to pile one controversy on another. FIFA President Sepp Blatter, already opposed to Israel’s suspension (he met last week with Israeli Prime Minister Netanyahu and Palestinian President Mahmoud Abbas) is probably looking to avoid two crises on his hands at once.

Israel can even take comfort in historical precedent. When Netanyahu went to the White House in January 1998 to meet with President Clinton, he reportedly expected a tense meeting about the peace process. But the Monica Lewinsky scandal broke that day, leaving the president preoccupied.

With world soccer preoccupied and the eyes of the world elsewhere, this could be FIFA and Israel’s Monica moment.