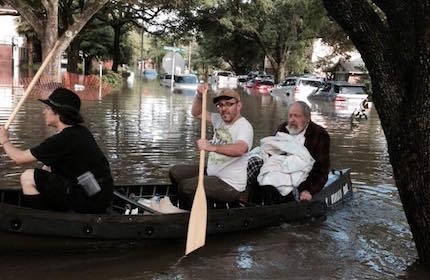 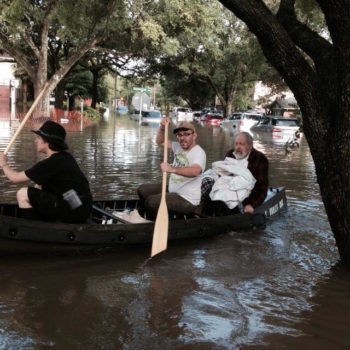 Rabbi Joseph Radinsky, rabbi emeritus of United Orthodox Synagogues of Houston, was among those who had to be rescued from their homes by watercraft after Houston was hit with heavy flooding, May 26, 2015. (Robert Levy)

(JTA) – Two synagogues and the homes of countless Jewish residents were damaged in the floods that swept through Houston on Monday and into Tuesday, inundating homes and businesses, sweeping away cars and leaving at least five people dead.

Houston, America’s fourth-largest city and home to more than 40,000 Jews, was paralyzed when many of the canals that run through the city (known locally as bayous) crested after torrential rains soaked the city. Some 8-12 inches of water fell in a matter of hours on ground already saturated by heavy rainfall during the last few weeks.

One of Houston’s major bayous runs alongside North and South Braeswood Boulevard, where two major synagogues are located and many of Houston’s Jews live. Numerous residents had to be evacuated by watercraft, including a rabbi emeritus from United Orthodox Synagogues of Houston, one of the two synagogues that suffered damage. The other damaged synagogue was the Reform temple Congregation Beth Israel.

Houston’s JCC also said two of its properties were flooded, including the Merfish Teen Center, which will require new flooring, and racquetball courts and a preschool gym at the JCC’s Levit campus.

No fatalities or major injuries were reported among the city’s Jews.

“There’s water in every area of the shul – the main sanctuary, the social hall, the school wing, administrative offices. Luckily our Torahs were higher so they were not affected,” United Orthodox’s current rabbi, Barry Gelman, told JTA by phone. Gelman had to flee his home during the rains as floodwaters rose.

“Almost every house in this neighborhood sustained serious flood damages — from 6-8 inches to 3-4 feet of water in every house,” he said. “This will keep many people out of their homes for months.”

The outpouring of help from the community has been remarkable, Gelman said. As soon as the rain stopped, crews of volunteers from his 350-family synagogue community went house to house with canoes and rafts to rescue elderly residents and others stranded by the waters. After the waters receded, half a dozen Jewish high school boys showed up at Gelman’s house to help clean up and document the losses. A Conservative synagogue nearby offered United Orthodox prayer space (though United Orthodox said it plans to use its own social hall until repairs are completed), and another Orthodox synagogue in town offered to do the laundry of affected community members, complete with pickup and drop-off service.

“Amid all of this destruction, which is devastating, there is an incredible sense of unity and hope,” Gelman said. “The most important thing is no one got hurt.”

The CEO of the Jewish Federation of Greater Houston, Lee Wunsch, said the community was still assessing the damage but that the Jewish Family Service of Houston would be the point of contact for community members requiring short-term housing or support until their homeowners insurance kicks in.

“This is definitely the worst since Tropical Storm Allison 14 years ago, but the protocol for dealing with it is pretty standard,” Wunsch told JTA. “It would be nice if it would stop raining, though. That just adds to the aggravation.”

This week marked the first time that Congregation Beth Israel, which was built in the 1960s and has 1,600 members, ever flooded, according to Pat Pollicoff, the synagogue’s president. More than a foot of water poured into the sanctuary, and air-conditioning and electrical systems in the sub-basement were flooded. The water came in the back door, which faces the bayou, she said.

The synagogue was able to get remediation crews in overnight Tuesday into Wednesday to pump out water and dry the carpets, which should limit the damage. Pollicoff said the synagogue was still working out the logistics of how to handle several major events scheduled for the coming days, including a graduation ceremony at the synagogue’s Jewish day school, a wedding, Shabbat services and another large event scheduled for Thursday night.

“The whole area surrounding the temple was so badly hit,” Pollicoff said. “Many members lost homes and cars. It’s a terrible thing for the entire community.”