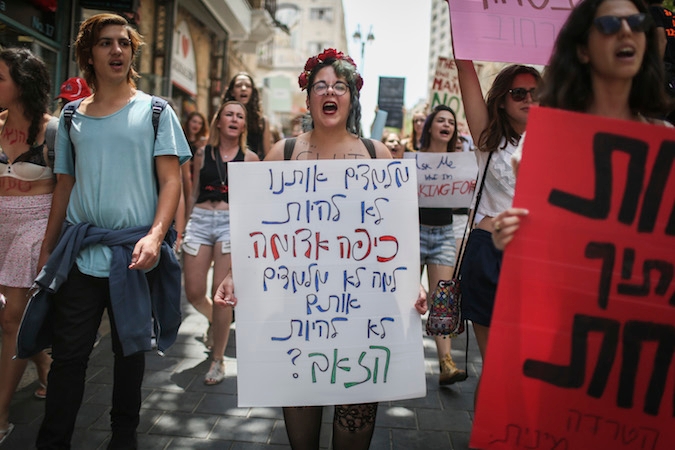 Israeli protesters chant slogans as they march in the SlutWalk in central Jerusalem, May 29, 2015. The placard in the center reads, "They teach us not to be Little Red Riding Hood. Why don't they teach them not to be the wolf?" (Hadas Parush/Flash90)
Advertisement

(JTA) — Several hundred people, many of them high school students, marched through Jerusalem in an annual protest against rape and a perceived tendency to blame rape victims.

Israel’s fourth annual SlutWalk, held Friday, promoted the message that women should be free from sexual harassment even when wearing revealing clothing.

As at other SlutWalks in Israel and elsewhere, many participants were scantily clad. Among the slogans on signs and in chants were “Blame the rapist” and “When she says no, she means no.”

The demonstration, which had light police protection, went smoothly, with no violence and only a few spectators responding with critical or abusive comments, according to the Times of Israel. One participant told the publication she thinks women in Israel suffer more harassment than elsewhere.

“People in Israel think everything is their business, and they say things that are not OK,” she said.

Launched in Toronto in 2011 after a local police officer said that to prevent rape “women should avoid dressing like sluts,” SlutWalks have since taken place in various countries around the world.