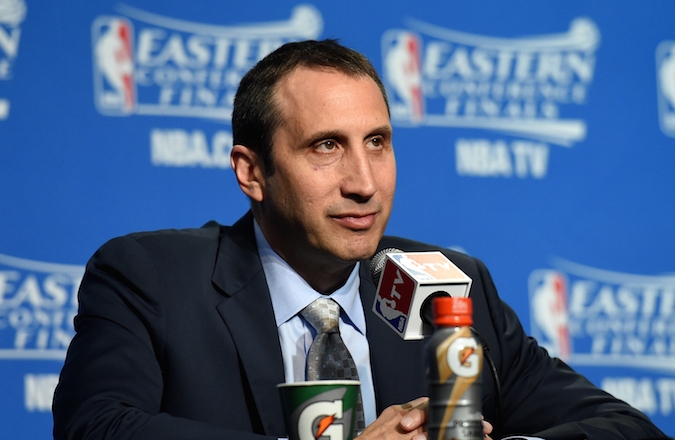 Cleveland Cavaliers coach David Blatt speaks to media before Game Four of the Eastern Conference Finals against the Atlanta Hawks on May 26, 2015 in Cleveland. (Jason Miller/Getty Images)
Advertisement

After the last game of an impressive series sweep of the Atlanta Hawks, Cleveland Cavaliers coach David Blatt talked with broadcaster Ernie Johnson in front of an arena of joyous hometown fans.

“So let’s be honest,” Johnson said. “This hasn’t always been easy this year, David. But to be standing here, going to the finals, just tell me how that feels to you tonight.”

“Well, we’re in Cleveland,” Blatt said with a smile. “Nothing is easy here.”

As candid as that sounds, it’s almost an understatement in terms of describing Blatt’s tumultuous first season as an NBA coach. Somehow, despite parlaying a stellar European coaching career into a trip to the NBA Finals in just one season, Blatt finds himself on the hot seat, with something to prove.

How does that happen?

The crazy ride started with Blatt, 56, a four-time Coach of the Year in Israel, leading Maccabi Tel Aviv to an improbable Euroleague title in 2014. Blatt, who played point guard at Princeton and professionally in Israel’s Super League, initially thought he’d transfer to the NBA as an assistant to new Golden State Warriors coach Steve Kerr (whom he’ll now oppose in the finals) – but the Cavaliers took a chance and hired him as head coach in June 2014 to helm a team with modest expectations.

Quickly, however, things advanced to another level.

Just weeks after Blatt was hired, LeBron James – a northeastern Ohio native, a four-time MVP and one of the best players in NBA history – announced that he was leaving the Miami Heat (after two titles and four straight trips to the finals) to return to the Cavaliers, where he started his pro career as a teenager. Overnight, the Cavaliers were draped with championship-size expectations. The preseason acquisition of All-Star Kevin Love to join LeBron and Kyrie Irving, among the top point guards in the league, only added to the hype.

As the stars adjusted to playing together, the season started slowly – the club was 19-20 in January and lost its starting center to a year-ending injury. While the growing pains were predictable, Blatt’s job was rumored to be in jeopardy. Rumors that LeBron wanted Blatt fired swirled in the media, which seemed eager to pounce on the NBA newcomer.

After weathering the storm, Blatt acknowledged to JTA that he needed to make big adjustments in the NBA.

“I’ve gone through my own learning curve that I’ve obviously worked through,” Blatt told JTA in February after the Cavs started to turn around their season, winning 18 of their last 21 games. “Two-thirds through the regular season I’ve become a lot more comfortable, and a lot more cognizant of the things that are necessary to make a winning situation on an NBA team.”

With the help of several crucial midseason acquisitions (J.R. Smith, Iman Shumpert and Timofey Mozgov), Blatt’s team streaked into the playoffs as the Eastern Conference’s second seed and the league’s hottest team. The Cavs lost Love to injury amid their first-round sweep of the Boston Celtics, then rallied to beat the Chicago Bulls before dismantling the Hawks.

In the finals, which start Thursday, they’ll face a Warriors squad with the best record in the league and the MVP, Stephen Curry.

Despite the turnaround and march to the finals, the blows to Blatt’s reputation have only intensified, with LeBron’s dominance, game-winning shots and customary confidence stealing the show and getting most of the credit. Blatt didn’t help himself by nearly costing the Cavs a crucial victory in the tough series against the Bulls, calling a timeout the team didn’t have — one of his assistants pulled him back before the referees noticed. Making matters worse, moments later LeBron nailed a buzzer beater to win the game — and proceeded to tell the world that he had called the play, overruling Blatt in the process.

Looking back, LeBron’s decision to return to Cleveland may have doomed Blatt’s NBA transition from the start by casting him as second fiddle to the game’s best player, with his outsized personality and extraordinary talent. That doesn’t take away anything from Blatt’s ability.

This week signals a potential shift in the dynamic, as Blatt’s players (including LeBron) have praised him more than they have in the past. And in theory, the finals offer a chance for some face-saving redemption. But in reality, the series is shaping up as a lose-lose situation for Blatt: If the Cavs win, it’s all about LeBron. If they lose – even though the Warriors have played at a historically high level all season – Blatt will be the obvious scapegoat.

At least Blatt has the support of Israeli Prime Minister Benjamin Netanyahu, who told him recently that “all of Israel is behind the Cavaliers.”