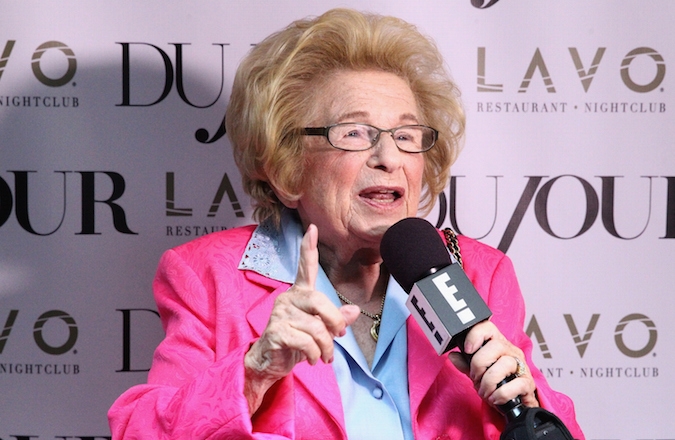 Dr. Ruth Westheimer, the 87-year-old sex therapist and TV host, has been in the news this week for a controversial statement on sexual consent. However, she’s also been on the interview circuit to promote her new memoir, “The Doctor is In: Dr. Ruth on Love, Life, and Joie de Vivre,” which was published Tuesday. In a New York Magazine interview published on Friday, Westheimer reveals some intriguing facts from her book and her Jewish past.

She lost her virginity atop a pile of hay on a kibbutz.

As an orphan after the Holocaust, in which her parents were killed, Westheimer immigrated to what was then the British Mandate of Palestine — which is where this steamy encounter took place.

She “found solace” with a sexy male nurse during Israel’s War of Independence.

Westheimer trained as a sniper in the Haganah (a precursor to the IDF) for Israel’s War of Independence in 1948. After she was injured in a bombing, one male nurse she met while recovering eased her pain.

Her first love was a boy named Putz.

Yes, Putz, as in a Yiddish saying Westheimer paraphrased recently, attributing it to the Talmud: “Ven der Putz shtayt, der saychel gayt,” literally (according to JTA’s unofficial Yiddish translator, author Shulem Deen), “When the penis ‘stands,’ the brains walk out.” She still visits Putz in Israel every year.

Losing her parents in the Holocaust shaped her views on sex and relationships.

“I don’t think sexuality became part of my identity then. But I do believe that my insistence on relationships, on people wanting to have a significant other, that certainly was shaped by that experience,” Westheimer said.

“We certainly know that Freud was wrong,” Westheimer said. “He should have taken a class with me, because he said any woman who doesn’t have a vaginal orgasm is an immature woman. We know that that’s not so.”