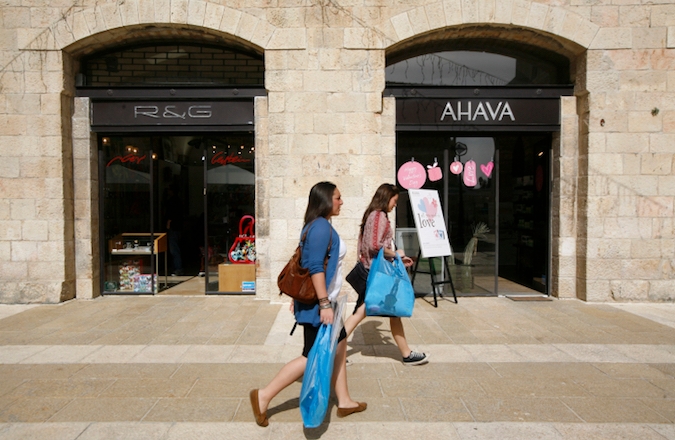 An Ahava store at the Mamila Mall in Jerusalem, February 15, 2010. (Miriam Alster/Flash90)
Advertisement

The company, owned by Kibbutz Mitzpe Shalem, located about one mile from the Dead Sea in the eastern West Bank, is considering opening a new production plant in the Tamar Regional Council to the south, the Israeli business daily Globes reported Monday citing unnamed sources.

The company, a target of the Boycott, Divestment and Sanctions movement for operating in the West Bank,  framed the potential move as due to changing needs, not politics.

“In light of expanding production needs and changes in regulations for cosmetic products in some Western nations, Ahava is indeed examining the possibility of opening an additional factory. One of the possibilities is the Tamar Regional Council. Other possibilities are also being looked into. As of now there is no final decision,” the company said in a statement.

The potential move comes after SodaStream, an Israeli company headquartered in Maale Adumim that makes home soft-drink machines,  announced it would close its West Bank factory and move to a new facility in Lehavim, a Negev community near Beersheba in Israel’s south.