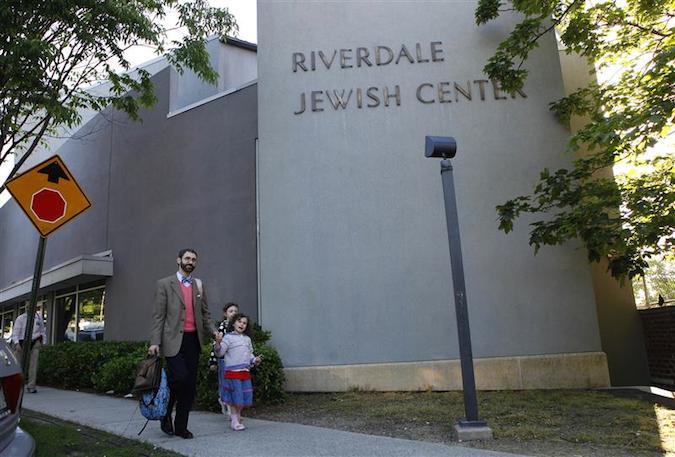 The Riverdale Jewish Center has been engulfed in controversy since the New York Times published an article about its rabbi, Jonathan Rosenblatt.
Advertisement

NEW YORK (JTA) – The Riverdale Jewish Center is seeking to get rid of Rabbi Jonathan Rosenblatt, whose habit of inviting young males to join him for naked heart-to-heart talks in the sauna was the subject of a recent article in The New York Times.

In a meeting Monday night, the board of directors of Rosenblatt’s Orthodox synagogue voted 34-8 to seek a financial settlement to get Rosenblatt to resign his pulpit position, the N.Y. Jewish Week reported. Though Rosenblatt’s unusual behavior long was known in his synagogue community, the publicity that now surrounds Rosenblatt prompted the board to shift course and decide that it would be better if he left the 700-member shul.

“As we informed you in our last letter, the Board met again this Monday night, and we write to share our progress,” said Tuesday’s letter from the board to congregants.

“We discussed the ongoing challenges and the profound impact on our shul community. The Board ultimately concluded that, in view of all these circumstances, the best course of action would be to achieve an amicable resolution with Rabbi Rosenblatt, and we are constructively engaged in discussions to that end,” the letter said. “As you would expect, we have actively listened to and considered the spectrum of views within the congregation on this matter. We ask for your continued patience and a genuine respect for all as we work towards this goal.”

The Times story that prompted the firestorm focused on Rosenblatt’s custom of inviting male congregants or students, some as young as 12, to play squash or racquetball, then join him in the public shower and sauna or steam room, often naked. No one cited in the story accused Rosenblatt of sexual touching, but several expressed their discomfort with the practice and described the behavior as deeply inappropriate for a rabbi and mentor. At various times, Rosenblatt was told by rabbinic bodies or his congregation’s board to limit such activity.

Rosenblatt says he is innocent of any crime. The Bronx district attorney’s office said it is looking into whether any crime was committed and has urged victims to come forward.

In a letter sent last week to congregants, Rosenblatt did not acknowledge any inappropriate behavior but said, “If any of you feel that my behavior, even if innocent, was inappropriate, I apologize to those affected.”

In the letter, Rosenblatt said he had been advised by his lawyer not to respond publicly to the substance of the accusations.