TripAdvisor CEO: A tech exec with a soft spot for Israel 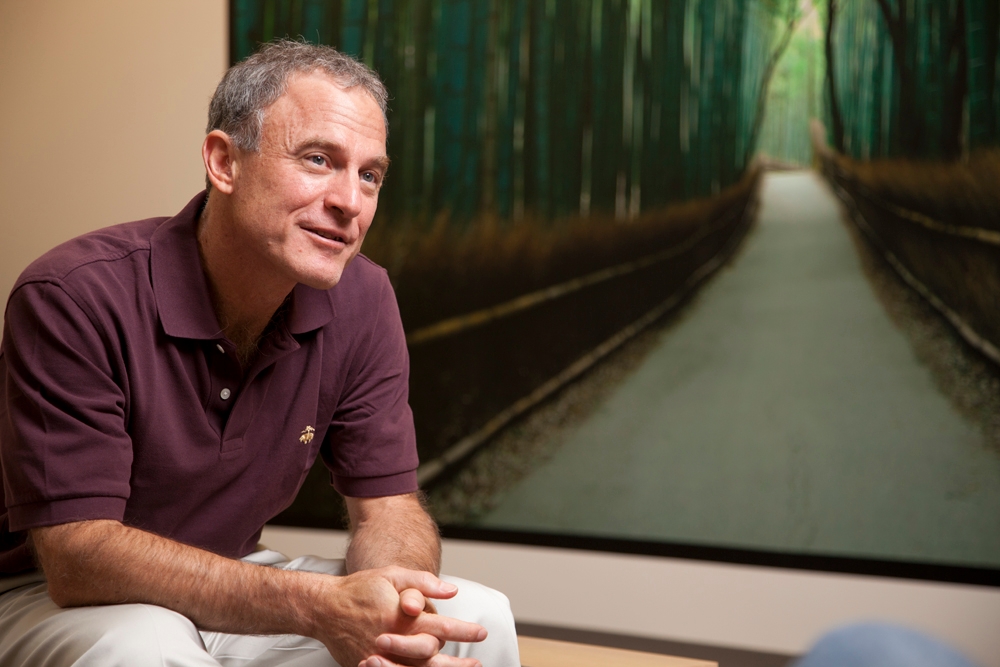 Though he's CEO of a major travel company, Stephen Kaufer says he doesn't really have wanderlust -- but he would like to revisit his favorite destination: Jerusalem.
Advertisement

NEW YORK (JTA) – When Stephen Kaufer, the CEO of TripAdvisor, an $11 billion company that runs America’s leading user-generated hotel review website, thinks back to all the places he has visited, one stands out as his favorite.

“Oh my gosh, looking at all of these amazing structures, the history that you could still visually appreciate from thousands of years ago with modern life going on all around it — I just thought it was magical,” Kaufer said of his 1989 visit to Israel. “It instantly turned into my favorite trip then and ever since.”

The trip is etched in Kaufer’s memory for another reason: It was the honeymoon he took with his young wife, Caroline Lipson Kaufer. She died in 2005 of pancreatic neuroendocrine cancer at age 42, leaving Kaufer with four young kids to raise on his own.

Kaufer, now 52, is not your typical tech company CEO. He’s gray-haired, understated and sounds far more like the droning high school teacher played by Ben Stein in “Ferris Bueller’s Day Off” (“Anyone? Anyone?”) than the head of a public corporation. Though he runs a travel website, Kaufer doesn’t really suffer from wanderlust, preferring to stay close to his home in the Boston suburb of Newton, Massachusetts. That’s probably a good thing for his family because after he remarried in 2012, he and his wife, Lisa Howe, found themselves with a Brady Bunch-style household: eight kids between the two of them.

After Kaufer sold his company in 2004 for $210 million, instantly transforming him from a middle-class guy to a wealthy 1 percenter, his idea of splurging was to trade in his old clunker for a new Volkswagen Passat, put away money for his kids’ college educations and make several sizable donations to medical research.

“I wanted to use the windfall to take care of my family,” Kaufer told JTA in an interview. “I don’t fly private jets.”

Aside from that Israel visit, the other trip that stands out in Kaufer’s mind – and the one he’s most accustomed to recounting – is the vacation he and Caroline decided to take to Mexico in 1998. In planning for the trip, Kaufer began searching the Internet for objective reviews about a particular hotel, but all he could find was dozens of websites with the same promotional boilerplate and publicity photograph. When he finally unearthed a genuine review by a couple that had stayed at the hotel, Kaufer found their unvarnished perspective — and the uninviting photographs they posted — invaluable. He booked another hotel instead.

Caroline, a Harvard Business School graduate and a software executive in her own right, suggested there could be a start-up in matching up travelers with helpful, honest reviews. Kaufer, who recently had sold the software company he co-founded after graduating from Harvard in 1985 with a degree in computer science, was game. In 2000, TripAdvisor was born.

Though Kaufer sold the company in 2004 to InterActiveCorp, which at the time also owned Expedia, he stayed on as CEO – even after TripAdvisor came under Expedia’s umbrella in 2005 and was spun off from Expedia as an independent public company in 2011. At its initial public offering, TripAdvisor opened at $29 a share. After peaking about a year ago near $110, it’s now trading near $75.

The period of acquisitions coincided with tumult in Kaufer’s own life, after his wife died of cancer and Kaufer was forced to lean on friends and family – including his in-laws, who live nearby – for help raising his children, then ages 5, 7, 12 and 13. Kaufer had hired help at home, but he made a point of making it back to the house every night he could to eat dinner with his kids.

Kaufer says the Jewish value of leaving the world a better place helps guide his life, even though he can’t remember the Hebrew term for it (tikkun olam).

“We try to practice it as a family and as a company,” Kaufer said.

He created a charitable program at TripAdvisor that donates 2 percent of all profits to charities suggested by company employees, focusing on groups that help the less fortunate. In 2013, the last year for which records are publicly available, the TripAdvisor Charitable Foundation gave away nearly $2.7 million.

Raised in Los Angeles, Kaufer grew up going to a Reconstructionist synagogue, with his family lighting candles on Friday nights and celebrating the major holidays. His father had been raised Orthodox, but Kaufer’s upbringing was more Zionist than observant. He remembers his parents going to Israel shortly before the outbreak of the 1973 Yom Kippur War and returning home with a shovel filled with shrapnel holes as a souvenir from the battlefields of the Golan Heights.

Kaufer’s own family belongs to a Reform synagogue, Temple Beth Avodah in Newton, and his kids’ summer camp of choice is Crane Lake Camp, a Reform movement camp in the Massachusetts Berkshires. His son Harry graduated from Brandeis, the Jewish-sponsored nonsectarian university in suburban Boston, in 2013. Though Kaufer hasn’t been back to Israel since his visit more than 25 years ago, most of his children have, including on Birthright Israel programs and with their grandparents. A daughter is planning on spending this summer there.

When Kaufer does travel, he says he always tries to write hotel reviews – and stay incognito so the hotels don’t give him any special treatment.

“Hoteliers can get unnecessarily nervous if they hear I’m coming,” Kaufer said. “To be clear: Yes, I write reviews like all their other guests, but my review doesn’t count any more than anyone else’s — at all.”

The competitive landscape for TripAdvisor has become more intense as Google and other tech giants have crept into travel. Competitors include Booking.com, Priceline and Yelp.

But Kaufer says he tries to keep a few steps ahead by constantly innovating – and not paying attention to the daily stock price.

“We’re all doing things to constantly change our business models,” Kaufer said, noting that the site expanded last year to offer instant bookings. “But maybe somebody will get your customers anyway,” he shrugged.

If he ever were forced out of TripAdvisor, Kaufer said, he’d probably pursue something in the medicinal life sciences. He has special interest in cancer (after his wife’s death he established the Stephen and Caroline Kaufer Fund for Neuroendocrine Research) and multiple sclerosis, which sent his mother to a wheelchair from the time Kaufer was 13.

“With TripAdvisor, it’s pretty cool to have been able to affect in a positive way so many people’s vacations, and to help a huge number of independent businesses that have great products or services for travelers,” Kaufer said. “But it’s not curing cancer.”