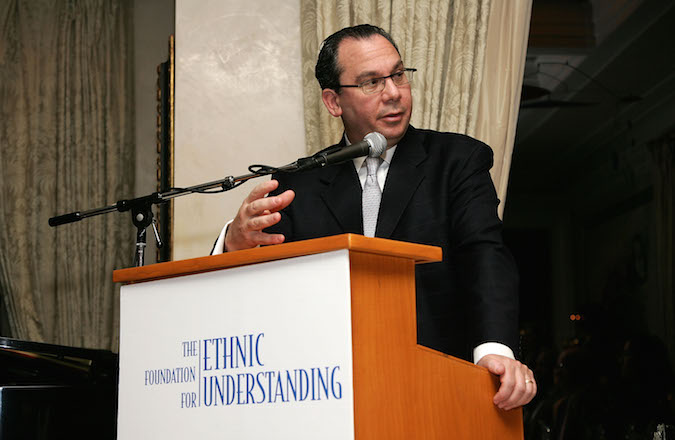 Rabbi Marc Schneier speaking at a benefit for the Foundation for Ethnic Understanding in New York City in March, 2007. (Bryan Bedder/Getty Images)
Advertisement

NEW YORK (JTA) – If Rabbi Marc Schneier’s account of his expulsion from the Rabbinical Council of America is to be believed, he owes his ouster to failures of the U.S. Postal Service.

Schneier, an Orthodox rabbi and leader of The Hampton Synagogue in Westhampton Beach, New York, told JTA this week that he learned of his expulsion from the RCA, the main centrist Orthodox rabbinical association, only when reading a report about it last week in the Forward newspaper.

But the RCA apparently made the decision months ago, following an ethics inquiry about Schneier’s behavior. The investigation was prompted by reports in the New York tabloids that he had had an extramarital affair with a woman who later became his fifth wife.

Schneier, who says he was separated from his fourth wife at the time, chalks up his behavior to a “serious bipolar disorder” and says he explained the situation to the satisfaction of the RCA’s ethics committee, known as a Vaad Hakavod. He says the three-person committee even spoke with the doctors at Beth Israel Medical Center that Schneier has been seeing since his bipolar diagnosis. Last October, Schneier says, he and the RCA reached an agreement whereby he was to furnish a private letter of apology to the RCA and the inquiry would be concluded.

In the letter Schneier says he mailed to the RCA, he said, “I expressed my deep regret for my actions, the shame I brought to my rabbinical family at the RCA.” The steady treatment of his bipolar disorder, Schneier said, has “put me on a whole new path of hope and possibilities.”

The RCA would not comment on the matter except to offer a terse statement confirming the expulsion.

“The Rabbinical Council of America Executive Committee reviewed the facts presented to it regarding the conduct of Rabbi Marc Schneier and voted to expel him from his membership,” said the statement form Rabbi Mark Dratch, the RCA’s executive vice president. “This decision has been communicated to Rabbi Schneier. Rabbi Schneier’s status as rabbi of his synagogue is determined by the synagogue’s leadership and any questions about his status should be directed to them. The RCA will have no further comment about this matter.”

But Rabbi Shmuel Goldin, a past president of the RCA and chairman of the ethics committee that met with Schneier, said that even if the RCA had received Schneier’s letter, the rabbi likely would have been expelled anyway given his behavior. The ethics committee’s decision last October to endorse Schneier’s continued membership in the RCA in light of the medical explanations for his behavior constituted only a recommendation to the RCA’s 47-member executive committee; that body retained final say over Schneier’s status in the association.

This week, after the Forward story appeared, the RCA executive committee held a conference call in which the decision to expel Schneier was upheld, Goldin said.

“The underlying problem is that his behavior was unacceptable for a rabbi,” Goldin told JTA. “In the estimation of the executive committee, this behavior” — the extramarital affair — “negatively affected the nature and the name of the rabbinate.”

Schneier is one of New York’s higher-profile rabbis, not only for the exploits that have landed him in the gossip pages of the tabloids but also for running star-studded programs for his wealthy synagogue community in the Hamptons on Long Island. He also presides over the Foundation for Ethnic Understanding, an organization devoted to bridge-building between Jews and other ethnic groups such as blacks and Muslims. African-American music producer and hip-hop impresario Russell Simmons chairs the foundation, which is known for attracting A-listers to its fundraising events.

Schneier’s father, Rabbi Arthur Schneier, is also a prominent figure known for rubbing elbows with the rich and famous. As longtime leader of Manhattan’s Park East Synagogue and founder of an organization called the Appeal of Conscience Foundation, the elder Schneier has hobnobbed with world leaders and has hosted countless dignitaries in his synagogue, including Pope Benedict XVI. He is also a Holocaust survivor.

The younger Schneier says he learned of his expulsion from the RCA only last Saturday, when someone knocked on his door early Shabbat morning to wake him to tell him of the report in the Forward about his ouster. After Shabbat ended, Schneier says, he immediately picked up the phone and called Dratch and Rabbi Shmuel Goldin, a past president of the RCA.

“As I indicated to you in our conversation last night, to our knowledge you did not ‘fully comply with any and all requests made of view [you] by RCA appointed officials,’” Goldin wrote. “As part of our agreement with you concerning your continuing membership in the RCA, you had been asked to write an official letter of apology to the RCA concerning your public actions which we felt had embarrassed the kavod [honor] of the rabbinate. Our office did not receive that letter. Even more significantly, repeated attempts were made to reach you by phone, through certified mail and by email. Those attempts were never acknowledged nor did we receive any response.”

Goldin reiterated that the ethics committee’s determination merely constituted a recommendation to the executive committee.

“After patiently continuing our attempts to reach to [you] over the course of months, the situation was brought to the RCA’s executive board and the decision was made to revoke your membership,” Goldin’s letter said. “While we respect your 35 year relationship with the RCA, as well as your father’s 55 year relationship; given your continued silence, we felt we had no choice but to act as we did. Any further possible change in the revocation of your membership would have to be discussed by the full executive committee.”

Henry Sheinkopf, a spokesman for Schneier, said the rabbi will continue the work he has done that has brought thousands of people closer to Judaism.

“The RCA is a voluntary membership organization with no sanction ability,” Sheinkopf told JTA. “There was an inquiry, the ethics committee found no basis for action, there was an agreement between the RCA and Rabbi Schneier, the RCA broke the agreement, and frankly they did something they haven’t done maybe throughout history” — expel a member.

Schneier says he has received an outpouring of support from congregants and friends since the RCA news broke, and that he even fielded offers of membership from two alternative Orthodox rabbinic associations.

“If anything, this will strengthen my abilities,” Schneier said of the turn of events. “What we’ve done for Orthodox Jewry and synagogue culture is really remarkable.”

But, he added of the RCA, “I feel betrayed. We had an agreement. We had an understanding. It was broken. I’ve been wronged. I am very, very hurt.”