‘Orange is the New Black’: The best Jewish moments from the new season 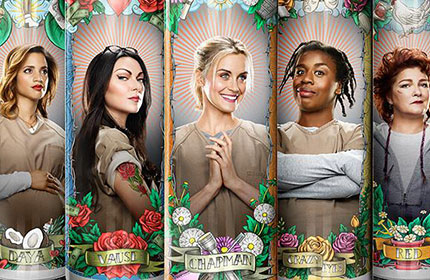 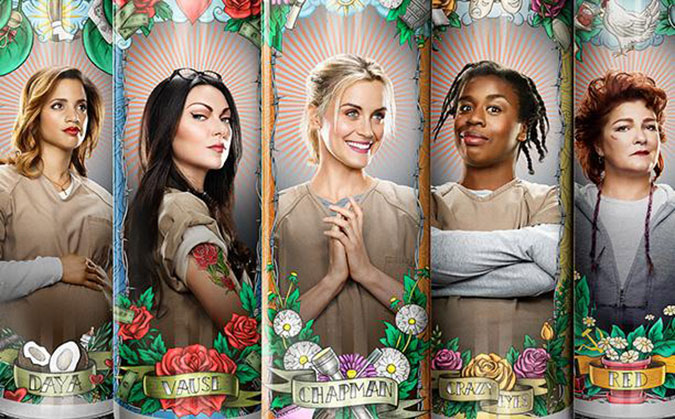 Members of the cast of “Orange Is the New Black.” (Courtesy of Netflix)

“Orange Is the New Black” protagonist Piper Chapman may no longer have a Jewish fiancé, but that doesn’t mean that Judaism isn’t a huge part of the new season of the Netflix hit. In fact, religious identity is one of the biggest themes of Season 3, as many of the inmates look for something to cling to, whether it be Norma’s (Annie Golden) cult or, in the case of Cindy Hayes (Adrienne C. Moore), Judaism. It’s not all that surprising: The series creator, Jenji Kohan, is Jewish, and Judaism also played a big role in her previous series, “Weeds.” We break down the best Jewish moments of the season, but if you didn’t have a chance to binge watch the entire season this weekend — congratulations, you have a life! — proceed with caution. Mild spoilers follow.

Since the quality of food at the Litchfield prison has hit rock bottom now that it is all pre-packaged, kosher is the only decent option. When Cindy asks for a kosher meal and is accused of not being Jewish, she replies, “You think you know my life? Shabbat Shalom, bitch!” That’s just the start of some great lines from Cindy in her quest for edible food, including “Shanah tova and hava nagila. It is good to be chosen,” “Jesus ain’t the messiah. He ain’t come yet,” and (in response to someone asking if a seat is taken), “Yeah. We’re saving it for Elijah.”

Caputo stands up to Danny

As the rest of the inmates catch on about the kosher meals, Danny (comedian Mike Birbiglia) from the private corporation that now owns Litchfield notices there are a lot more kosher meals on the purchasing order. He asks Joe Caputo (Nick Sandow), the assistant to the warden, how there can be so many Jews at Litchfield. Caputo responds, “I know. It’s confusing, right? We used to have them wear the Stars of David, but we had to stop doing that after World War II. I don’t remember why.” 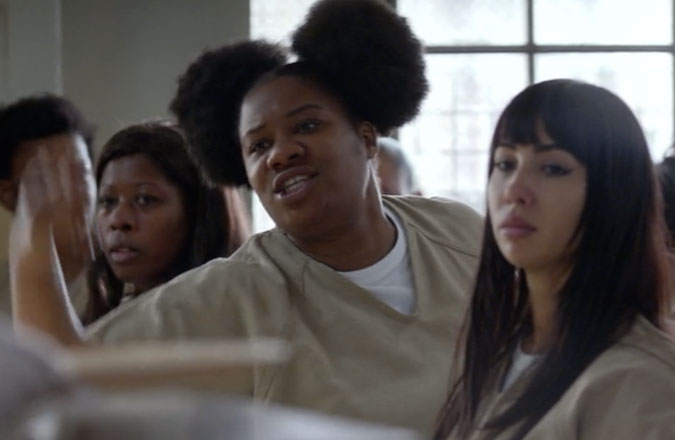 All the Jewish stereotypes come out when the “Rent-a-Rabbi” interrogates the inmates to find out who is really Jewish, but it’s impossible not to laugh at lines like Lolly (Lori Petty) saying, “I think you all are doing a wonderful job controlling the media. I mean we. We are doing a wonderful job.” But the highlight is when Cindy tells the story of her upbringing using plot points from “Annie Hall” and “Yentl.” The rabbi tells her, “Miss Hayes, while I am heartened that you appreciate the works of Woody Allen and Barbra Streisand, I think you’ve confused cultural Judaism with committed Jewish belief. Also, I hear Mandy Patinkin can be difficult to work with.”

In the end, the only prisoner who is allowed to keep getting the kosher meals is the nun, Sister Jane Ingalls (Beth Fowler). She says, “The Abrahamic religions are pretty much all the same until you get to Jesus.” Touché.

When Cindy decides to actually convert, she takes it seriously and gives the rabbi a beautiful speech: “Honestly, I think I found my people. I was raised in a church where I was told to believe and pray. And if I was bad, I’d go to hell. And if I was good, I’d go to heaven. And if I’d ask Jesus, he’d forgive me and that was that. And here y’all are saying there ain’t no hell. Ain’t sure about heaven. And if you do something wrong, you got to figure it out yourself. And as far as God’s concerned, it’s your job to keep asking questions and to keep learning and to keep arguing. It’s like a verb. It’s like … you do God. And that’s a lot of work, but I think I’m in, as least as far as I can see it.” When the rabbi tells her she can be a Jew and she cries, it is obvious how far this storyline, which started as comic relief, has come.

Cindy can’t technically complete her conversion because there is no naturally occurring body of water in prison to use as a mikvah. But at the end of the finale, a hole is accidentally left open as the fence is being fixed and the inmates get to go into the lake. It’s one of the most touching moments of the series for all the characters, but especially for Cindy, who takes the opportunity to use it as a mikvah.