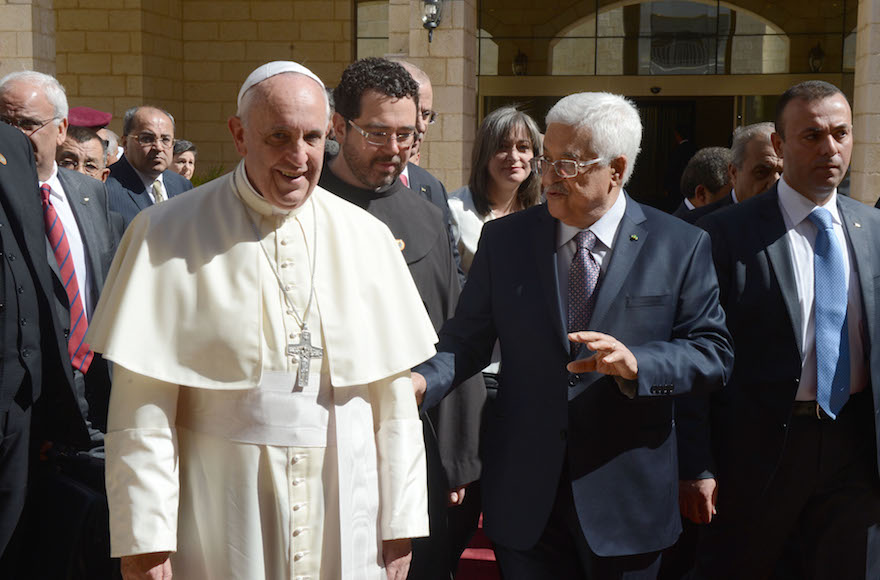 (JTA) — The Vatican signed a treaty with the “State of Palestine” in hope of advancing a two-state solution to end the Israeli-Palestinian conflict.

The accord, which was signed on Friday, concerns the Vatican’s activities in territory controlled by the Palestinian Authority. Israel immediately criticized the move.

“This hasty step damages the prospects for advancing a peace agreement, and harms the international effort to convince the PA to return to direct negotiations with Israel,” Israel’s Foreign Ministry said in a statement.

The agreement, which implies the existence of an official Palestinian state, urged both sides to make “courageous decisions” in order to end the decades-long conflict.

“The Palestinians continue to act unilaterally, which distances us from any chance of holding direct dialogue,” Deputy Foreign Minister Tzipi Hotovely said.

The Vatican had previously welcomed the UN General Assembly’s 2012 resolution that recognized Palestine as an official state and Pope Francis has used the term “State of Palestine” throughout the past year. However, Friday’s treaty is the first document formalizing the Catholic Church’s recognition of Palestine.

Archbishop Paul Gallagher, the Vatican’s foreign minister, told Reuters that he hoped the treaty could act as a “stimulus to bringing a definitive end to the long-standing Israeli-Palestinian conflict, which continues to cause suffering for both parties.”