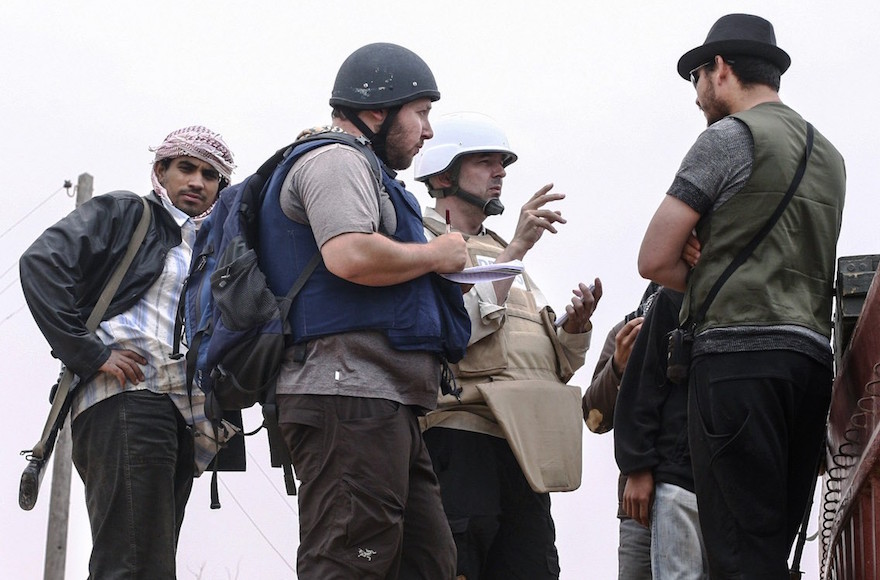 In this handout image made available by the photographer, American journalist Steven Sotloff, center with black helmet, talks to Libyan rebels on the Al Dafniya front line, about 15 miles from Misrata, Libya, June 2, 2011. Sotloff was beheaded in September 2014 nearly a year after being kidnapped in Syria. (Etienne de Malglaive via Getty Images)
Advertisement

(JTA) — It’s been eight months since Jewish freelance journalist Steven Sotloff was beheaded by ISIS. Still shaken by the loss, his hometown of Pinecrest, Florida — an upscale community of some 20,000 people, just south of Miami — continues to find new ways to honor his memory.

“Temple Beth Am Day Day School wants you to know that your sacrifice will not be forgotten,” fifth-grader Zachary Marcus wrote in a dedication in the school’s yearbook. “It must have been too terrible to put into words what you went through leading to your death. You have more bravery and courage than anyone else we know. You are a true superhero, a real superman.”

Sotloff had also attended the Reform Jewish day school as a boy and his mother, Shirley, was a preschool teacher there who retired this year.

“She told me she’s proud of what I wrote,” Zachary said of Sotloff’s mother.

“I took into consideration that she would see it,” he added, saying he both wanted to convey his sympathy for Sotloff’s family as well as his admiration for the young journalist. (Note: This reporter’s son was a classmate of Zachary’s.)

After ISIS broadcast the beheading in a three-minute video on Sept. 2, 2014 — Sotloff was killed at age 30 more than a year after being kidnapped in Syria — the media shined a light on Pinecrest, in general, as well as the 1,300-member Temple Beth Am, where Sotloff’s family are members.

“It was incredibly challenging to find the words to explain this as a school, as a community and as a family,” said Nicole Marcus, Zachary’s mother and a clinical psychologist.

The memorial service was held at Temple Beth Am two days after the video was released. Community members and elected officials, including Florida Gov. Rick Scott and U.S. Sen. Marco Rubio, filled the 1,000-seat sanctuary.

The Marcus family was also there — Zachary was one of the few students who attended.

“He was at a place of maturity where he could handle it,” Marcus said. “He was affected by the powerful memorial service. He learned who Steven was, what this loss meant to his family and the community.” 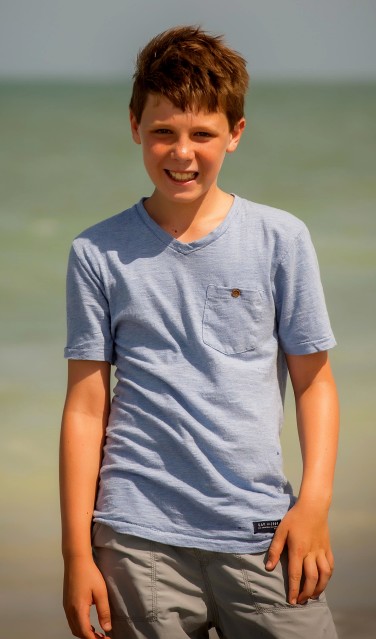 Zachary Marcus, above, who attended the same Florida Jewish day school as Steven Sotloff, wrote in the school yearbook that the slain journalist was a “a true superhero, a real superman.” (Niki Marcus)

The service made a strong impression on Zachary, who felt it was important that his school remember Sotloff.

“His is a story of resilience and perseverance,” Zachary said.

Pinecrest’s tributes to Sotloff extend beyond the synagogue community. Mayor Cindy Lerner, a friend of the Sotloffs, is leading an effort to create a memorial site in the 20-acre Pinecrest Gardens, a lush municipal park with more than 1,000 exotic plants, a petting zoo, historic buildings and extensive cultural programming.

Lerner said she only had “roughly drawn” details on what the Sotloff memorial will look like. It will include three small waterfalls fabricated of slate with a gradual decline in elevation of perhaps a foot. That will probably be surrounded by bromeliads, ginger and mixed tropical foliage, she said.

The park’s horticulturalist made recommendations for the memorial’s location, the mayor said.

“It will be in a public area,” Lerner said. “It will be a contemplative area, in the shade of a banyan tree, by a walkway that leads to the splash and play [area] for children.”

She said it will also have a small plaque with Sotloff’s date of birth and death, as well as a quote read at his memorial service — from a letter he wrote to his family that was smuggled out while he was in captivity: “Everyone has two lives.The second one begins when you realize you only have one.”

The memorial is expected to be completed by September, the anniversary of Sotloff’s death, Lerner said.

In addition, the Sotloff family and friends have established the 2LIVES: Steven Joel Sotloff Memorial Foundation, which was inspired by the same quote. Its aim is to provide support and assistance to journalists and their families affected by the realities of reporting from conflict-torn or disaster settings.

The 2LIVES Foundation will also provides scholarships for students who have the passion and skills to pursue careers in journalism — particularly those who want to tell the stories of people living in dangerous regions around the world.

Additionally, Sotloff’s alma mater, the University of Central Florida in Orlando, together with his parents, established a fund for the Nicholson School of Communications there. The Steven Sotloff Memorial Endowed Fund will provide scholarship support to UCF students majoring in journalism, as well as funding for symposia, lectures and other programming to advance journalism education.

As for Zachary Marcus, he sees Sotloff as an inspiration — he wants to be a journalist when he grows up.

Zachary ended the yearbook dedication with these words: “Temple Beth Am Day School is representing America in saying that we thank you for everything you did … Even though your death was a tragedy, it has made us stronger and more resilient than ever.”

Zachary told JTA, “I just want to say that I hope the rest of the world and here in Miami we keep remembering Sotloff’s stories. It’s terrible what happened to him. The only way to overcome is to remember.”