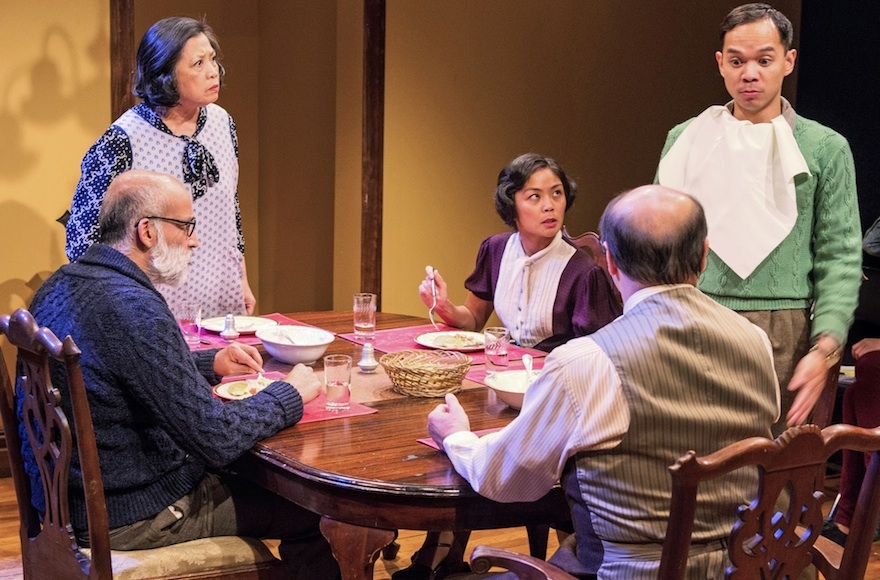 When the latest production of  “Awake and Sing!” — Clifford Odets’ 1935 classic drama about an extended Jewish family living in the Bronx —  opens July 13 at the Public Theater in New York, audiences are sure to be wowed by the experienced actor in the lead role.

Brash matriarch Bessie Berger is played by the award-winning Mia Katigbak — who presumably did not grow up in the Jewish section of her native Manilla.

Katigbak, producing artistic director of the National Asian American Theatre Company, won an Obie award for the role when the company first mounted the play two years ago. She leads a largely unchanged, entirely Asian-American cast in this production, once again led by director Stephen Brown-Fried.

Brown-Fried tells JTA that, while it never came up, he believes one of the reasons he got the job is that he is Jewish: “I really can’t speak for Mia, but I do think it was important to her, given the role that Judaism plays in the world of this play that someone involved in this production is Jewish.

“My grandparents were New Yorkers, not completely unlike Odets’s characters. Odets has always been a playwright dear to me and whose work I was always eager to direct.”

Brown-Fried says that Peter Kim, a friend from Yale University’s drama school, connected him with the theater company. In the process, “I became more familiar with the dire need for more inclusive casting. We began talking about what sort of roles Asians are least likely to be cast in.” One such example: A Jewish family in the 1930s Bronx.

“Certainly this is a different way of thinking about what’s going on,” Brown-Fried says. “We’re not so naive to think that people are going to walk into the theater and not realize these Asian-American actors are likely not Jewish. But if the actors have done their work diligently they’ll start to forget about that and [immerse] themselves in the story.”

Color-blind casting has been a hot topic in the theater business, but it’s a phrase Brown-Fried doesn’t like. “I don’t think there is any such thing,” he says. “We see color. We see race. I prefer to think of it as ‘color-conscious’ casting.”

Asked if he would cast Caucasian actors in a play about Japanese families interned during World War II, Brown-Fried says no. “That question has come up and I don’t think there a one-to-one equivalency that can be applied to this conversation,” he says.

“The issue is a history of marginalization,” he adds. “I don’t think European voices have been marginalized in the theater, so I’m not particularly interested in reverse situations. I want to expand the voices we can become familiar with.”