Op-Ed: L’Chaim to marriage equality, but our work isn’t finished 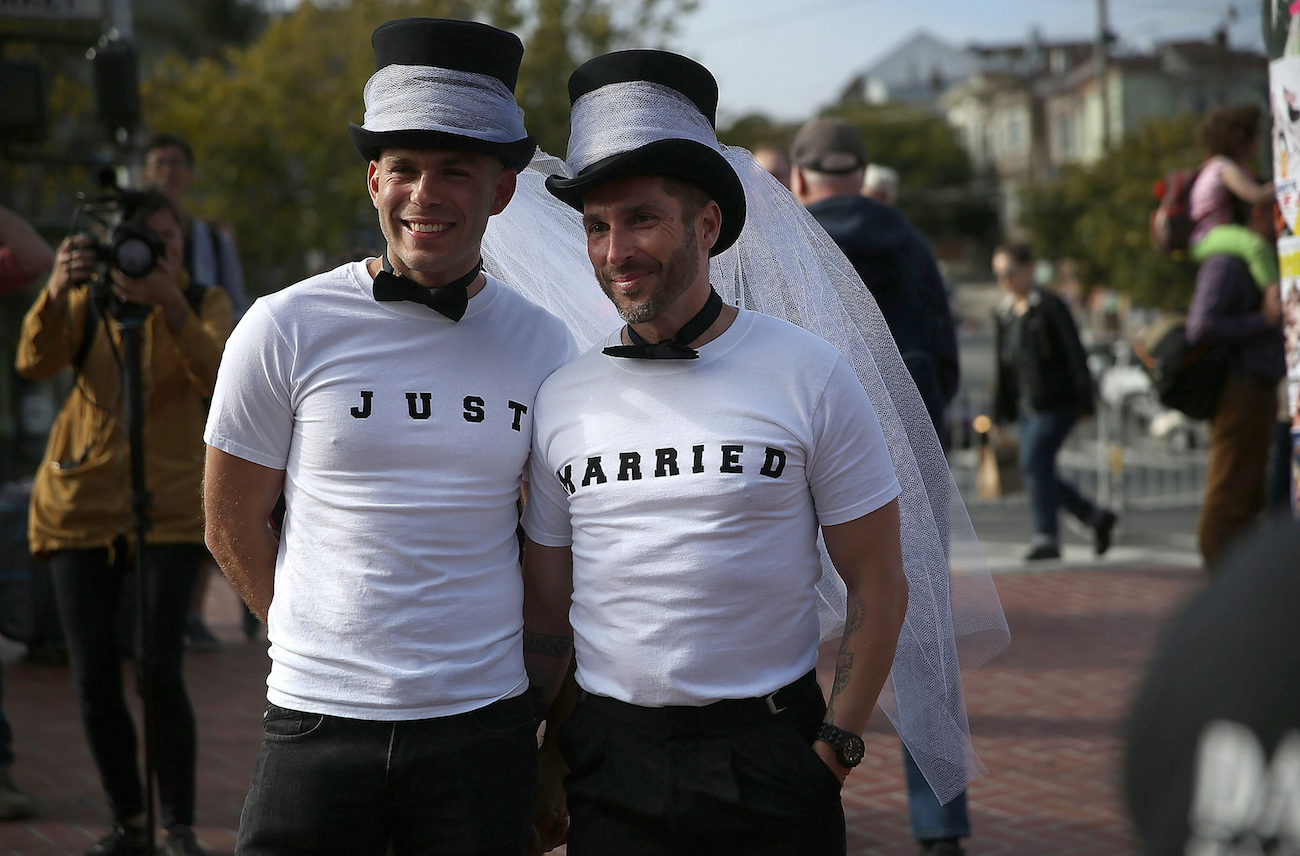 BOSTON (JTA) — Four years ago, I stood under a chuppah with the woman I was about to marry overlooking a valley in Massachusetts. I have an emotional memory of sweetness and joy from my wedding day, but I can’t recall many specific moments.

What I do remember vividly is the end of our ceremony, when Rabbi Sharon Cohen Anisfeld declared, “I’ve said this many times before as an act of civil disobedience, but today it gives me great joy to say as an act of civil obedience: According to the laws of the Commonwealth of Massachusetts, I now pronounce you married.”

I still feel sudden elation when I remember that moment and surprise that it mattered as much as it did. It mattered that my marriage was seen as valid and equal in the eyes of the law in Massachusetts. And thanks to the U.S. Supreme Court’s ruling last Friday, my marriage, and the marriages of countless others, are valid and equal in all 50 states. 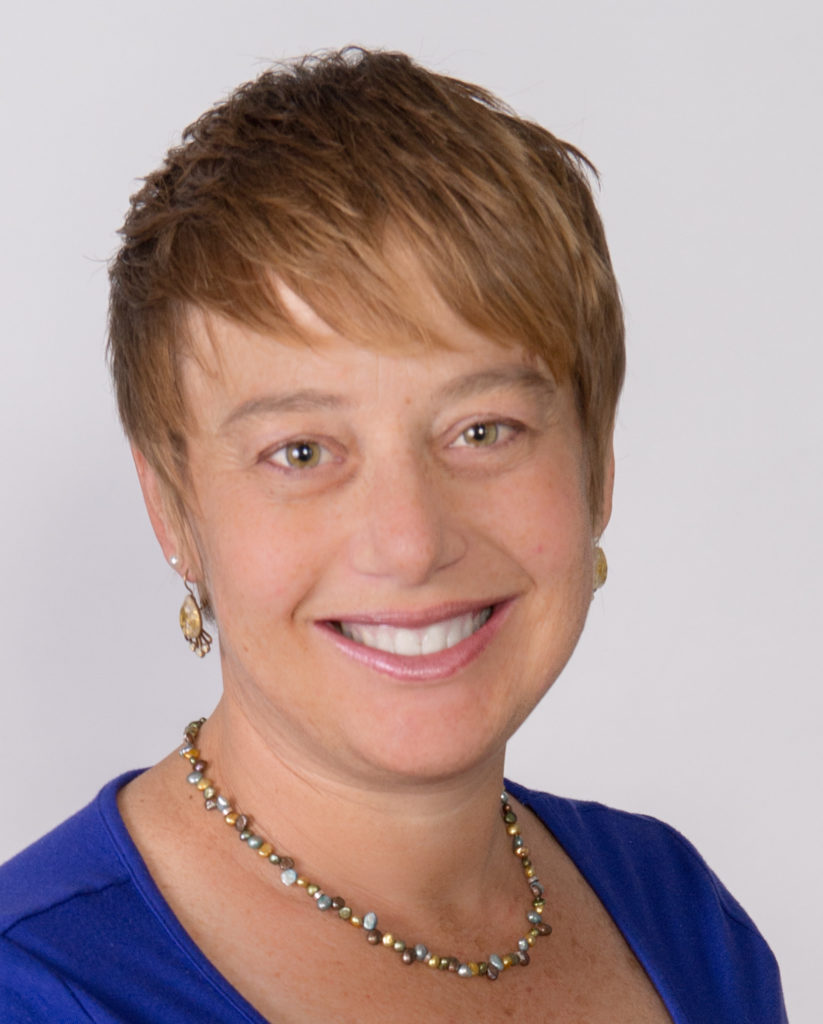 For the young children of many of my colleagues and friends who have attended same-sex weddings and know many gay and lesbian couples, the excitement is unremarkable, even bewildering. But of course, the road to achieving legal marriage equality in this country was long and arduous. Friday’s victory is, indeed, remarkable.

As the leader of Keshet, an organization working for the equality and inclusion of LGBTQ Jews in Jewish life for the past 14 years, I remember the many conversations with rabbis and other Jewish community leaders who initially did not support civil marriage rights.

I remember the questions: What message will we send to children if they see a rabbi officiate at gay weddings? Isn’t it inappropriate for children to see two men standing under a chuppah in a synagogue? How can I support something that so many people in my congregation aren’t comfortable with?

As these questions continued to bubble up, Keshet led a statewide campaign in Massachusetts in which gay Jewish couples told their stories at synagogues, Jewish community centers and federations to help dispel these concerns, clarify answers and mobilize the Jewish community to support equal marriage rights.

I was proud when the Jewish Community Relations Council of Greater Boston became the first JCRC in the country to declare its support for equal marriage. I saw the impact of this support in the faces of many LGBTQ Jews who had felt rejected by their Jewish communities. At a time when the majority of faith leaders spoke out against our civil rights, it was powerful to see Jewish leaders demand equality because of — not in spite of — our tradition. Suddenly, a full and equal place in community and society was a possibility, at least in Massachusetts. 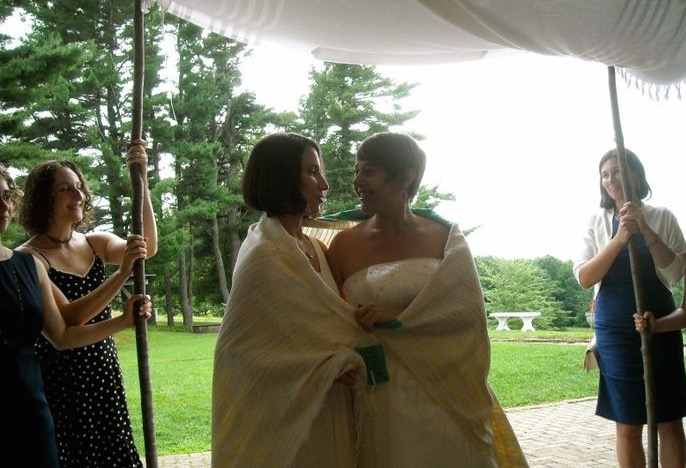 Idit Klein, right, and Jordan Namerow at their 2011 wedding. (Courtesy of Idit Klein)

After Friday’s Supreme Court decision, couples in every state in this country can publicly declare their love and commitment and participate in the institution of marriage. As many have noted, we no longer have gay marriage, same-gender or same-sex marriage; we simply have marriage.

This is a tremendous victory for all who care about equality. The relationships and families of LGBTQ people have gained critical legal protections that have long been available to heterosexual married couples. Most importantly, though, gay couples have gained recognition from the highest court in the land that our relationships, our commitments, our love are equal to all others.

So we celebrate. We savor the sweetness of this hard-fought win. We rejoice knowing that our children will never know a world where their families are unequal in the eyes of the law.

Some cheer Dayenu! It is enough, this thrilling victory. And yet I know the crippling effects of bias and discrimination persist, so we must say “Lo Dayenu” — It is not enough. Marriage equality is not enough. It is far from enough.

Because in 29 states in this country, people can be fired from their jobs or refused housing because of their sexual orientation. Because in 32 states people can be fired because of their gender identity or expression. Because youth who are (or are perceived to be) lesbian, gay, bisexual, transgender or queer are twice as likely to be bullied at school.

Because in 21 states people can refuse to serve LGBTQ people in places of business if they think doing so would violate their religious beliefs. Because transgender people are particularly vulnerable to violence and discrimination, with 90 percent of transgender respondents to a recent survey reporting workplace discrimination or harassment. Because people can live in a country with superb laws yet still be treated poorly by their peers.

All of these statistics have stories. I think of the 44-year-old lesbian who was fired from her job as a synagogue family educator after she came out. I think of the 70-year-old gay man who has worked in Jewish communal life his entire career and never felt comfortable being out. I think of the 16-year-old trans teen who wasn’t permitted to return to his Jewish summer camp as a CIT in his affirmed gender identity. I think of the 32-year-old woman whose parents wouldn’t join her on her wedding day when she stood under a chuppah with another woman.

I think of the road ahead in order to pass federal non-discrimination legislation that protects all people regardless of sexual orientation and gender identity. I think of the even longer journey of cultural change following legal progress. I think about the role that our Jewish communities can play in accelerating the pace of change.

And so, with our Facebook newsfeeds still ablaze with rainbows, we get back to work.

(Idit Klein is the executive director of Keshet, a national organization working for LGBT inclusion in Jewish life.)