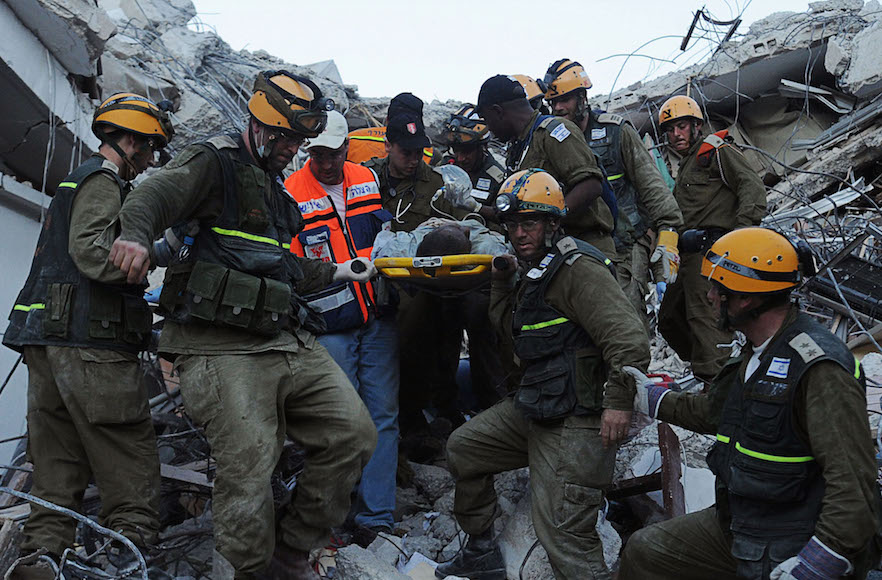 This post has been updated based on an interview with retired Amos Radian, who was the Israeli ambassador to the Dominican Republic, with responsibility for Haiti at the time. Radian arrived in Haiti overland, with a security guard, on Wednesday Jan. 13, 2010, and was joined Thursday by a small Israeli advance team, which was not directly involved in any rescue or relief. Radian confirmed that Israel’s major teams did not arrive until after President Obama’s speech — on Friday afternoon and evening, in two planes, and that its field hospital was in place by Saturday morning. The original version of this post stated that “there was no Israeli team in place when Obama spoke”; that line now reads: “the main Israeli rescue and medical teams were not in place when Obama spoke.”

It’s a compelling hero-takes-the-fall narrative: Valiant little country takes the lead in rescuing a battered people and gets snubbed when it’s time for kudos.

It’s the picture Michael Oren, the former Israeli ambassador to the U.S., paints of Israel’s 2010 Haiti rescue operation in “Ally,” his book excoriating President Barack Obama’s treatment of Israel. Haiti’s devastating 7.0 magnitude earthquake, which struck outside the capital, Port-au-Prince, and killed hundreds of thousands (though the official death toll is disputed) comes at a pivotal moment in the book, when Oren believes the U.S.-Israel relationship is on a downward trajectory.

There’s a problem, though: Except for the part about the uncommon valor of Israeli rescuers, none of it appears to based on anything that actually happened.

The passage appears on pages 132-133, in a section punningly headlined “Tremors” and that describes tensions over Israeli-Palestinian peace, “as the White House and the Prime Minister’s Office pitched toward collision”:

“My foreboding only deepened on January 15, when Obama issued an official statement on Haiti. ‘Help continues to flow in, not just from the United States but from Brazil, Mexico, Canada, France, Colombia, and the Dominican Republic,’ the president declared. Omitted from the list was Israel, the first state to arrive in Haiti and the first to reach the disaster fully prepared. I heard the president’s words and felt like I had been kicked in the chest.”

• Israel was not “the first state to arrive in Haiti.” Israel arrived on the evening of Jan. 15. According to this CNN timeline, the United States, Iceland, Canada, Spain, China, Argentina, Cuba and Brazil had rescue teams in place by Jan. 13 and 14. The Dominican Republic was first. I’m also not sure what Oren means about Israel being the first to reach the disaster “fully prepared.” According to the CNN timeline, an Argentine field hospital had treated 800 people by Jan. 13. Amos Radian, the Israeli ambassador to the Dominican Republic whose responsibility included Haiti, said in an interview that the Israeli hospital, launched Saturday, was the first among those countries sending teams in. The Argentine hospital was already in place.

• Obama delivered his remarks between 1:08 and 1:14 PM on Friday, Jan. 15. The Israeli rescue teams arrived on Jan. 15 – in the evening, according to Walla News and the Ministry of Foreign Affairs. And, according to multiple news sources, including JTA, the Israeli army’s field hospital was not set up set up before Saturday morning, Jan. 16.

So why would Oren have “felt kicked in the chest”? Israelis did not rescue or treat a single Haitian until after Obama delivered his remarks; Radian and a small Israeli advance team were on the ground prior to the speech, but the main Israeli rescue and medical teams were not in place when Obama spoke. What would have led Obama to cite Israel that Friday afternoon?

Dozens of countries had pledged assistance to Haiti, in addition to the seven cited by Obama — should he have mentioned all of them? The countries he mentioned all have longstanding relationships with Haiti, by dint of being neighbors, or because of a post-colonial relationship (France) and a substantial Haitian Diaspora (Canada) — why would Israel be in that group?

• Finally, Obama did nod to the broader effort – but the clause ending his sentence applauding the seven countries, “among others,” is dropped from Oren’s text.

I asked Oren’s aides and his publisher about the Haiti anomaly. I got a one-sentence reply from the publisher: “Penguin Random House does not comment on its editorial and vetting processes.”

I don’t doubt Oren felt “kicked in the chest,” as he describes it — it’s just that I can’t help but wonder why. An explanation would be relevant to understanding how he arrived at his thesis that Obama deliberately created daylight with Israel, which others have challenged.

The Haiti episode has already been picked up in columns in the New York Post and the New York Jewish Week; it is a potent tale.

Incidentally, at least two others berated Obama in real time, based on the same erroneous premise: Martin Peretz in his column then carried by The New Republic, and the Zionist Organization of America, which cited Peretz.

I asked Peretz what led him to his conclusion that Obama was snubbing Israel. I also asked him if he and Oren had spoken in real time about the purported snub.

He said he did not consult with Oren at the time, and he cited a CNN report describing American embarrassment at the relative efficacy of the Israeli operation and another in the Christian Science Monitor noting that Israel sent the team on Jan. 14.

Which is true, and verifiable in this Foreign Ministry release, but beside the point. The team did not land until after Obama spoke, and was not in operation until the next day.