Amy Winehouse, through the lens (and the bottom of a bottle) 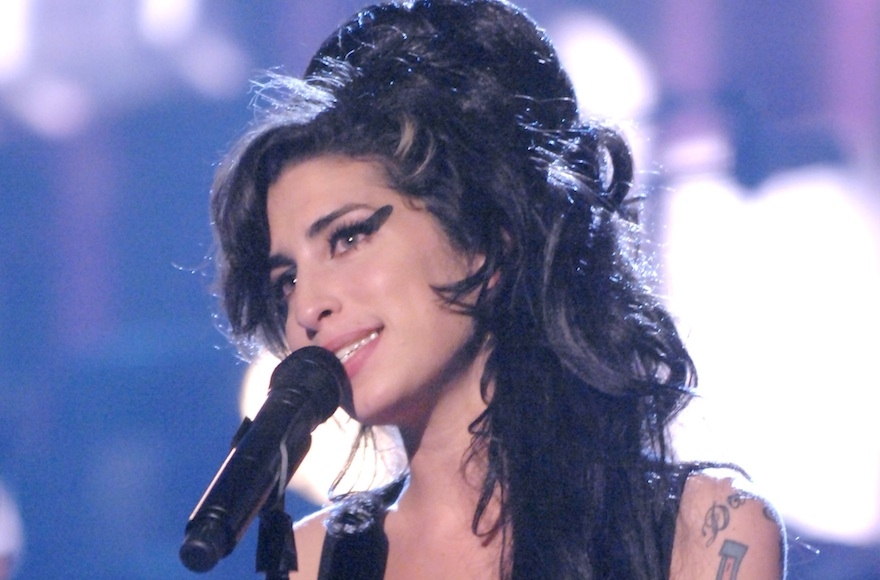 (JTA) — To anyone who has read a rock-and-roll biography or caught an episode of VH1’s “Behind the Music,” it is a sadly familiar tale: An artist achieves great success only to self destruct.

There’s something called the “27 Club,” made up of a surprisingly number of influential musicians who died at that young age. Among them are Jimi Hendrix, Janis Joplin, Kurt Cobain and, as of July 2011: The English songstress Amy Winehouse.

Winehouse is the subject of a powerful new documentary, “Amy,” which is both fascinating and painful to watch. She released only two albums during her brief career, though two more (a compilation and live performance) were released in short order after her death from alcohol poisoning.

A singer of remarkable talent — her last recording was a magical duet with her idol, Tony Bennett — Winehouse’s erratic, drug-addled ways threatened to overshadow her image (videos of her being booed off the stage in Belgrade, too drunk to sing, spring to mind). And what “Amy,” the film, does best is bring Winehouse to life, turn the caricature we imagine her to be into a full-blooded human being.

At first, it didn’t look as if director Asif Kapadia (“Senna,” about the race car driver Ayrton Senna, who died at age 34) would pull it off. He was approached in 2012 — shortly after her death — by the head of Universal Music UK about making the film. Although Asif says he knew of Winehouse and owned her records, he wasn’t a fan. Still, he and his team were intrigued by the idea.

They gathered material, but the people he wanted most to participate — her first manager, Nick Shymansky, and lifelong friends Juliette Ashby and Lauren Gilbert — were not interested. They said it was too soon.

READ: In mourning Amy Winehouse, a biblical vixen goes ‘Back to Black’

But over the course of a year, he built trust with them — or, perhaps, just plain wore them down — and they agreed to take part. Shymansky’s participation proved critical, since he possessed a cache of videos he’d taken of the young, playful and hopeful singer.

There were recordings of messages she’d left on his machine that he’d saved: “This is your favorite Jewish girl — apart from your mother.”

Shymansky’s contributions adds an unparalleled level of intimacy. We see a teenage Amy singing “Happy Birthday” in the soulful, jazzy voice of someone much older. In a voiceover — played over a montage of still photographs — she claims she didn’t consider the possibility of a show business career. Still, she says she “started writing music to challenge myself,” like James Taylor and Carole King, whom she admired.

When Island Records president Nick Gatfield (who signed Winehouse) met her, he says he saw “a classic North London Jewish girl. She had an attitude.”

She was still that little Jewish girl with an attitude after recording her first album, “Frank,” in 2003, a jazz album that proved more a critical than a commercial success. While making a promotional appearance on TV, one talk show host called her speech “common” — meaning it as a compliment, that she didn’t put on airs.

When considering her future at the time, Winehouse in an interview with a British print journalist predicted, “I don’t think I’m going to be at all famous. I don’t think I can handle it.”

Certainly there were early signs of trouble. She was treated for depression as a child and also was bulimic, which she attributes to her parents’ divorce when she was 9. But the added pressure of success started a downward spiral from which she never recovered.

At first it was alcohol. There was an early opportunity to help, in 2005, but Winehouse said she’d only go to rehab if her father thought it necessary. He said it wasn’t. That became the inspiration for her biggest hit, the multiple Grammy-winning song “Rehab” — but ultimately it was scant reward for what was to come.

Sometime after the release of her hit second album, “Back to Black,” she met Blake Fielder-Civil, her on-again, off-again boyfriend and, eventually, husband. It was Fielder-Civil who introduced her to hard drugs, and he even had the unmitigated chutzpah to film them doing drugs.

As her addictions and demons took over, Winehouse changed. Her performances became uneven; she slurred words. She became so difficult that Shymansky quit as her manager. He told her: “I love you but I don’t like what you’ve become. I don’t want to be around you.”

Winehouse signed her road manager Raye Cosbert as Shymansky’s replacement, which proved a bad choice. Cosbert had divided loyalties: To do one part of his job, he had to keep her on the road — even, as it turns out, when that wasn’t in her best interest.

In fact, the filmmakers suggest that she purposely went on a binge drinking spree hoping that her management would cancel her last tour — the one where she gave that disastrous Belgrade appearance — to no avail. She was in drunken oblivion when they came to put her on the plane.

In any case, he’s not the only villain here. Watching the film, it’s hard not to rage not only at her father, but also at Cosbert and Fielder-Civil. That’s the power of “Amy.” It strips away the trappings of celebrity to reveal a genuine and talented person. Beneath the beehive hairdo, she was a young woman in considerable pain who, more than anything, needed more people in her life to be more concerned about her well-being than riding her gravy train.

“Amy” opens in New York and Los Angeles on July 3 and nationwide on July 10.