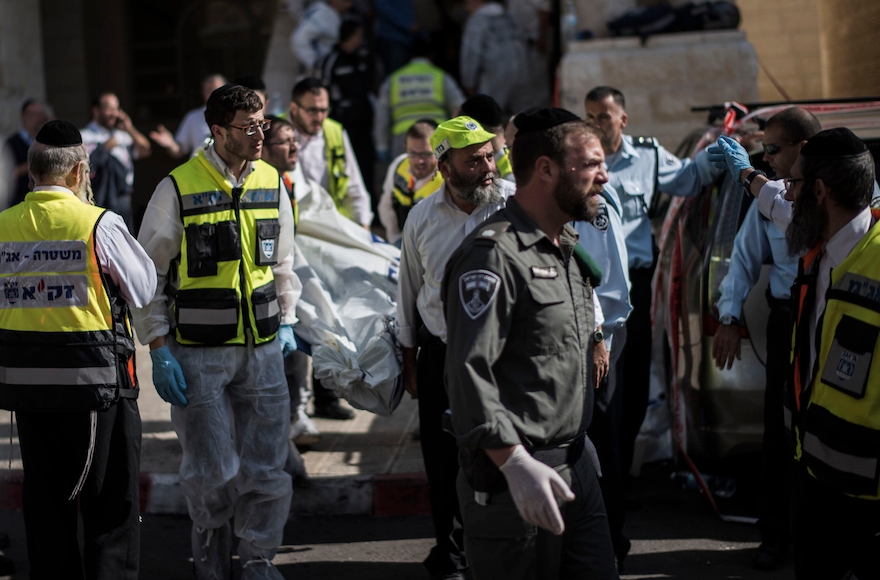 Israeli police and rescue at the scene of a Jerusalem synagogue where four people were killed in a terrorist attack, Nov. 18, 2014. (Yonatan Sindel/Flash90)
Advertisement

JERUSALEM (JTA) — The home of one of the Palestinian terrorists who murdered four rabbis and a policeman in an attack on a Jerusalem synagogue was sealed by the Israeli military.

The eastern Jerusalem home of Uday Abu Jamal, 22, who was killed by police during the November 18, 2014 attack, was cemented shut on Wednesday. It is not known where his family was at the time of the action. The home of Ghassan Abu Jamal, 28, who also was killed during the attack, also located in the Jabel Mukaber neighborhood remains unsealed. The two men were cousins.

The government issued demolition orders for the home in the days following the attack by the cousins with meat cleavers and a pistol on the Bnei Torah Kehilat Yaakov synagogue, but the country’s Supreme Court held up the action after the families appealed the order.

Israel’s Interior Ministry also revoked the residency permit of the wife of Ghassan Abu Jamal, a West Bank Palestinian who was allowed to live in Israel under the Family Reunification Law.

“The terrorists and those who send them will continue to pay a heavy price. Terrorism has a price, including to the lone attacker. We will also apprehend the murderers who perpetrated the recent attacks in which Malachi Rosenfeld and Danny Gonen were murdered,” Israeli Prime Minister Benjamin Netanyahu said Wednesday night.